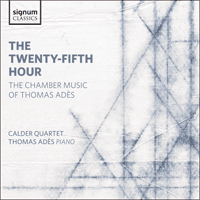 The twenty-fifth hour & other chamber music

This album from the Los Angeles-based Calder Quartet presents Thomas Adès’s award-winning first work for string quartet, Arcadiana, and the premiere recording of The Four Quarters. For the Piano Quintet Adès himself joins them at the piano.

'A first recording here for The Four Quarters (2011), a masterly reflection on the diurnal cycle that ends with the fantastical The Twenty-Fifth Hour … each piece is full of memorable ideas and ingenious rhythmic and textural workings' (The Sunday Times)
'Part of the fascination of Thomas Adès’s chamber music is that it intrigues the mind with its science, while transporting the listener to imaginary places…The Calder Quartet perform all three with energy and sensitivity. Highly recommended' (Financial Times)

These three works are not only in classic genres but themselves becoming classics, with Arcadiana as close as any modern quartet to joining the repertory. The Calders included it on their debut album, between the Ravel and Mozart’s last quartet, and have played it often since. They have also been proponents of the Piano Quintet, with Gloria Cheng, and were the second team to play The Four Quarters, within a few months of its première.

Adès wrote Arcadiana in 1993 and gave it a favourite form, of several sound pictures, distinct and characterful, being drawn out of the same musical stuff, as if each were a different view through a kaleidoscope. ‘Six of the seven titles’, he has noted, ‘evoke various vanished or vanishing 'idylls'. The odd-numbered are all aquatic, and would splice if played consecutively.’

In the first movement the viola is a gondolier poling through the other instruments’ moonlit water, with shreds of shadowy waltz drifting in now and then. Next, under a quotation from The Magic Flute (‘That sounds so delightful, that sounds so divine’ sing Monostatos and the slaves when Papageno plays his bells), comes a song for the cello under glistening harmonics. The music is stopped twice in its tracks by major chords, and slips away whistling something from the Mozart score. ‘Auf dem Wasser zu singen’ ('To be sung on the water') takes its title and a figuration from a Schubert song, though here the song is Adès’s own, over which water seems to be falling in drops, with increasing antagonism between the elements.

The tango centrepiece—the non-idyll—relates to Poussin’s paintings in which shepherds in a classical landscape make out the inscription on a tomb: ‘Et in Arcadia ego’, which could be understood as voiced by the deceased ('I too was in Arcadia') or by Death ('Even in Arcadia I am there'). Like those paintings, Adès’s Arcadian sequence at once beguiles and threatens, not least here, in what is its longest section. Still in the Louvre, the following movement relates to Watteau’s ‘L’Embarquement pour Cythère’ ('Boarding for Cythera', an island sacred to Aphrodite) and changes darkness to light, with high cadences and song phrases turning into water music that splashes out from Debussy’s response to the same picture, L’îsle joyeuse. From Venice, Vienna and Paris, ‘O Albion’ comes to England for a meditation on ‘Nimrod’ from Elgar’s Enigma Variations. (The first performance of Arcadiana was given at the Cambridge Elgar Festival.) Lethe, in Greek mythology, is the river of forgetting, as Adès remembers in the trajectory of his cello song, taken up by the other instruments and gradually lost.

His Piano Quintet of 2001 is in some ways quite different, not sectional and scenic but a continuous, abstract span. It is, however, as full of striking imagery as its predecessor, and sometimes of similar imagery: tightly worked cascades in the high treble, interlocked textures coming undone, a moment of repose, but now all engaged in the one unfolding process. There is a strong invitation to understand that process in terms of sonata form, with an exposition that is even repeated, followed by development and recapitulation. Beneath this guise the music is in constant evolution (as is indeed very often the case in Beethoven or Schubert); it is also far from classical norms in its texture, much of it being composed in layers that, though they certainly act on one another, follow independent courses set by their own harmonic and metrical guidelines.

So it is at the start, a kind of non-fugue in which the first violin, the piano and the remaining string trio enter in turn with what is partly the same material—a scalewise rise of three chords and then a descent through a different scale in quicker notes—and partly not, for each new entry has to adapt to a constantly altering environment, which itself seems to come out of the slightly wonky harmonies and the rhythmic skid of the basic idea. As Adès puts it, the violin goes two steps down a corridor and, at the third, finds a door that will not open: F, the first stopped note on the violin’s top string, one of the instrument’s ‘roughest’ notes, ‘the grit in the oyster’. Here it is the point where one harmony (rising) turns into another (falling), but it remains a crux right through the piece. The violin tries several approaches to it before gaining access to a new, higher world of regular quavers, which is where the piano comes in, obliged to do so at a lower level (B, to the violin’s initial C), and then the trio enters lower still, at B flat. Thus the music builds itself from the top down, and the three layers are also proceeding in different metres.

The texture begins to fall apart and is brusquely set aside for a ticking machine in the strings over rumbling piano, from which the second subject emerges in the form of beautiful harmonic exchanges between strings and piano, now metrically aligned. These progressions gradually come to crystallize into a song in A major on the piano, sounding as if it might be a quotation from Brahms, though Adès’s model was the second subject from the opening movement of Beethoven’s ‘Pastoral’ Sonata, to which he was drawn for its initial instability and because ‘the whole movement feels like one long organic process’. His own continues with developments of the song leading to downward scales that have each instrument in its own rhythm, and so to a magical uprush into the high treble, from which a slow descent completes the exposition.

Development starts with the piano tackling the first subject as the strings pursue their own course. Emphatic crescendos then carry the music towards a sequence of force and astonishing ordered complexity, where the strings are all independent of the piano’s common time and of each other, careering through time signatures such as 4/5 (four quintuplet crotchets to the bar) or 1/7, as well as more regular measures. When this has settled down attention turns to the second subject, and soon the strings assume responsibility alone, through harmonic terrain that moves from the darkly rich to the tensely glistening (violins and viola only, sul tasto and without vibrato).

As the strings come to buzzing rest on and around middle B flat, the piano returns, and before long the broken chords of the opening are back. The recapitulation is compact, and includes a delectable C majorish passage with string harmonics before the final seesawing ends on an upbeat.

The Four Quarters (2011) returns to the Arcadian model of brilliant evocation by means of tight construction, the central metaphor this time being the diurnal cycle. ‘Nightfalls’, the first movement, opens on two planes, the violins playing harmonics in a regular pattern of short-short-long while the viola and cello are in harmony, far below and slower. These planes are utterly distinct, and yet they seem not only to complement but also to resemble one another, in that the intervals on which the violins keep hesitating are also those with and towards which the lower instruments grope. More than that, the scintillant anapaest that the violins go on turning (Adès suggests it may also be heard as a dactyl, long-short-short) seems to be a basic motif for the whole quartet, one that will be refracted and reflected through different rotating prisms as the work unfolds. Here it makes a slow journey downwards, into the second violin and viola parts, leaving the first violin to join the cello in harmony. A more turbulent energy carries the music up again, and the violins reprise their chain of lights, which so quickly turns into nocturnal harmony in up to seven parts. This also rises, in register and agitation, to precipitate another short reprise, and the lights, perhaps now identifiable as stars, are still there at the darkening close.

All the remaining movements are shorter, ‘Morning Dew’ being emphatically the scherzo, mostly pizzicato. Though Adès in this work maintains the same time signatures in all parts, the four instruments are on their own tracks through stretches of this movement, now and then arriving at the same spot with some surprise, but then happily joining in a bit of ostinato. The second time this happens, the first violin goes off into bowed playing, followed by the others, still otherwise independent, but they cannot get the old music out of their fingers.

‘Days’ is a study in monotony, but within a context, of course, of constant change. The second violin begins by repeating middle C sharp to a repeating rhythm of short-short-long, short-long, short-long, short-long (thirteen beats, therefore), placed against a shifting frame of time signatures, the other instruments playing in harmony mostly below, until they are drawn into the second violin’s rhythm and disturb its equanimity. After this it is scalewise motion that comes forward as an alternative, until, startlingly, everyone arrives at fortissimo chords on the nagging thirteen-beat rhythm. Then quiet again, the music unwinds.

Finally, ‘The Twenty-Fifth Hour’, in a time outside time, restores high-treble lustre and dance, the time signature of 25/16 being divided into groups of 8+3+8+6. Now one may feel not only that the violin-harmonic image from the first movement is back but that it has grown into a bright melody, spinning in changing harmonic currents, resolving at times into scales, speeding up, reaching into a passage of magnificent triadic harmony, slowing down again and coming to stillness on a D major chord so beautiful it just has to be repeated.

Nearly twenty years separate the two string quartets on this record, and all I have been able to discover over this time is that music only gets more and more mysterious. I am very grateful for this enjoyable collaboration to Signum, Tim Oldham, Steve Long at Floating Earth, and my friends the Calder Quartet.