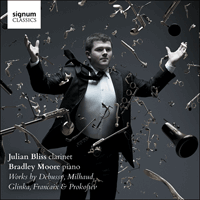 I first heard the Prokofiev a number of years ago and what struck me was not only the virtuosity required by both musicians to play it, but how intricate and beautiful it was. I knew straight away that I had to make my own arrangement of it, and after sight reading it through with Bradley there was no question about including it on this album. To me, the third movement in particular has a very French and jazzy feel to it. You could be fooled into thinking it was a piece of Debussy! Julian Bliss

It is often said that opposites attract. Certainly this appears to be true of Russian and French music over the past 175 years during which time composers of both nations have mutually admired the other’s work. The relationship dates back at least to 1840 when Henri Merimée, cousin of Prosper (author of the novella Carmen on which Bizet’s opera is based), visited Russia and saw a performances of Glinka’s A Life for the Tsar: deeply impressed, he published an article in Paris in which he hailed the work as “more than an opera: it is a national epic”. Glinka himself visited Paris in 1844, where he met Berlioz who enthusiastically helped promote a concert of his music there. Later that century, the not yet 18-year-old Claude Debussy was hired by Tchaikovsky’s patroness, Nadezhda von Meck, to act as piano accompanist to her family while they toured Europe in the summer of 1880. So successful was he that he was hired again by von Meck over the following two summers, by the end of which he was an enthusiast and major promoter of Russian music, most notably the work of Mussorgsky.

Debussy established himself as France’s leading composer with his atmospherically languid orchestral work Prélude à l’après-midi d’un faune, first performed in 1894, followed by his opera Pelléas et Mélisande and his quasi-symphonic La mer. Almost exactly 15 years after the historic premiere of L’après-midi, Debussy returned to this soundworld with his Première Rhapsodie for clarinet and piano. He had then recently joined the Paris Conservatoire’s advisory board, an appointment instigated by its then director Gabriel Fauré. Debussy, who had never considered himself a happy part of that establishment, had been “dumbfounded” when offered the position; nonetheless he accepted this honour, not least since he was then hard up financially.

Debussy’s duties included composing two pieces for the Conservatoire’s annual clarinet competition—one of them a showpiece, the other for sight reading. He began the showpiece, the Première Rhapsodie, in December 1909, finishing it a month later. Designed to test the technique of advanced clarinettists, the piece ranges from the sun-drenched world of L’après-midi d’un faune to the more sparkling scherzando style of his piano piece L’isle joyeuse; it also shares something of the easy charm of Ravel’s Introduction and Allegro for flute, clarinet, harp and string quartet, composed some two years earlier. On 14 July 1910, Debussy joined the jury to judge his Rhapsodie’s performances by 11 candidates. Six months later the Rhapsodie received its official premiere, performed by its dedicatee Prosper Mimart on 16 January 1911 in the Salle Gaveau in Paris. Enthralled by the performance, Debussy was moved to suggest it was one of the most pleasing works he had ever composed—a judgement to which many clarinettists have since concurred.

Sixty-five years after Debussy composed his Première Rhapsodie, Jean Françaix was approached with a similar commission from the Paris Conservatoire—to compose a work as a test piece for the clarinet department’s Pièce de Concours. Composed in 1974 for that year’s trials, Francaix dedicated Tema con variazioni to his grandson Olivier. In all his music, Françaix was unashamedly in the business of charming his listeners, though, unlike his friend Poulenc—with whom he is sometimes compared for the cheeky insouciance of much of his music—Françaix rarely expressed any deep emotion or sensibility. Tema con variazioni is no exception, presenting a perky theme followed by six variations which in their various ways recall the studiedly carefree and irreverent spirit of the 1920s, yet fulfil the requirement—in the composer’s own words—of being “perilous to perform”. “Fortunately,” he added, “clarinet players have masochistic tendencies…We are far from the time when Jerome K. Jerome, listening to a clarinet, wrote that it reminded him of this mother-in-law swallowed by a shark. Nowadays clarinet players have turned into mermaids; and Odysseus’s bonds should be of steel.”

It was the clarinet which first awoke the early nineteenth century composer Mikhail Glinka’s lifelong love of music: more precisely, hearing at the age of 10 or 11 a clarinet quartet by the Swedish-Finnish composer Bernhard Crusell. As Glinka recalled, “This music produced an incomprehensible, new, and delightful impression upon me. Thereafter I remained for the whole day in a sort of feverish condition, was submerged in an inexplicable, sweetly lethargic state…from that time I passionately loved music.” It seems odd, then, that Glinka never wrote a work featuring the clarinet as the main solo instrument. Possibly he was overawed by Crusell’s idiomatic writing, Crusell being a clarinet player himself. However at the age of 21 Glinka did begin composing a sonata for his own instrument, the viola, completing its opening Allegro movement in 1825. In his memoirs, he singled this out as one of his most successful early pieces, and certainly it has considerable charm, most notably in the early-Romantic style second subject.

Three years later Glinka added a slow movement during a visit to Moscow where he stayed with his old school friend Nikolai Melgunov (who not only introduced Glinka to Pushkin, but also did much to influence Glinka’s approach in composing his landmark opera A Life for the Tsar). The Larghetto harks back to Mozart in its noble classical character (all the more evident when played by clarinet) with just a touch of melancholy equally characteristic of the Viennese composer. Glinka, who was well pleased with this slow movement, had intended to add a rondo-finale based on a popular Russian folk song, Ladushka; this was never fulfilled and Glinka eventually used the folk song in “Children’s Polka”, a short piano piece composed in 1854.

Darius Milhaud achieved fame in his late 20s as the composer of such ballets as the Brazilian-inspired Le boeuf sur le toit (1920) and the jazz-influenced La création du monde (1922). So prolific was he as a composer that just five years later, in 1927, he had reached his hundredth opus; yet—apparently paying no particular heed to this apparent landmark—he fulfilled this with no more pretentious a work than a Sonatine for clarinet and piano, a successor to the 1922 Sonatine he had written for flute and piano. He dedicated the Clarinet Sonatine to the French player Louis Cahuzac, who gave its premiere in 1929.

Two rough and vigorous movements—characterized by Milhaud as Très rude (“harsh”)—frame a more reflective and melodious central movement. The brusque style of the outer movements is all the more accentuated by the piano’s parallel ninth chords and moments of polytonality which here and in the finale—unsurprisingly for a composer who exalted popular music genres—often suggest the rough-sounding ensemble of a village wind band, and indeed the peasant-derived polytonality of Stravinsky’s Rite of Spring and Les noces. Yet the music is both virtuosic and increasingly sophisticated as it progresses, recalling other Stravinsky works such as The Soldier’s Tale and Symphonies of wind instruments. The more limpid style of the central movement, Lent, opens with an apparently artless, graceful melody accompanied by increasingly bluesy “crushed” harmonies in a style distinctively Milhaud’s own. The piano introduces a darker tone for the central section, in which the clarinet broods while the music steadily rises to an anguished and bleak climax, then sweetening for the return of the limpid opening melody. The finale brings the work to a rude yet joyous end.

In 1943, during the Second World War, Sergey Prokofiev was in Perm to discuss staging his ballet Cinderella with the evacuated Kirov company. There he completed a Flute Sonata, Op 94. According to his biographer Israel Nestyev, its themes had been sketched before the war, inspired by the French flute player Georges Barrère. The Sonata became even more famous in a version for violin, transcribed at the suggestion and with the assistance of the Soviet violinist David Oistrakh. However it seems appropriate that the Sonata should now find new life in a transcription for another woodwind instrument, to which it seems particularly well suited.

The opening movement harks back to the neoclassical style of Prokofiev’s Piano Sonata No 5 of 1923 (which in turn appears to have inspired Poulenc’s Flute Sonata of 1956-7) as well as Cinderella. The second movement scherzo is initially light and capricious, but the piano part in particular introduces an increasingly sardonic tone, and the movement does not so much finish as precipitously wind up. There are further hints of disquieted emotions in the third movement, which has some thematic material in common with the third movement of Prokofiev’s then not yet completed tragic Violin Sonata in F minor. It also contains a striking passage of bluesy rumination: an admirer of jazz, Prokofiev at one stage held semi-clandestine meetings with fellow aficionados in his Moscow apartment in which he played recordings he had brought back from his foreign tours. Ultimately, though, the Sonata ends with an upbeat finale which includes in a central interlude one of Prokofiev’s sweetest melodies (which Poulenc, again, would recall in his Oboe Sonata, dedicated to Prokofiev’s memory).

I first heard the Prokofiev a number of years ago and what struck me was not only the virtuosity required by both musicians to play it, but how intricate and beautiful it was. I knew straight away that I had to make my own arrangement of it, and after sight reading it through with Bradley there was no question about including it on this album. To me, the third movement in particular has a very French and jazzy feel to it. You could be fooled into thinking it was a piece of Debussy!

The Première Rhapsodie is one of my all time favourite pieces. It’s one of those works that can be so effective in concert. Bradley and I spent about a week working on the pieces and putting together our arrangements before taking my all time favourite producer (Nicholas Parker) and engineer (Mike Hatch) to a hall deep in the English countryside. After 3 days of recording, about 10 packs of chocolate biscuits and never-ending amounts tea, we emerged, and here you have the result!