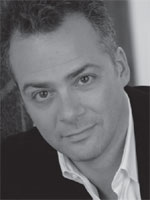 Bradley Moore has performed as piano soloist with orchestras including the National Symphony Orchestra and the Buffalo Philharmonic. He recently performed the Martinů Harpsichord Concerto with the San Francisco Ballet for the world premiere of Mark Morris’ Beaux, and has been heard as a recitative accompanist and continuo player with the Metropolitan Orchestra, the Vienna Philharmonic, the Mozarteum Orchester and the Metropolitan Chamber Ensemble.

Widely acclaimed as a recital partner, Mr Moore recently performed with Renée Fleming and Susan Graham at Carnegie Hall and on a national tour. He also enjoys partnerships with Christine Goerke, Alice Coote, Eric Cutler, and clarinetist Julian Bliss. He has performed live on A Prairie Home Companion with Ms Fleming and Yo-Yo Ma, and with Joshua Bell on CBS Sunday Morning News and Late Night with Conan O’Brien. His discography includes a recital with Mr Cutler on the EMI Classics Debut Series and a disc of songs by American composer Daron Hagen for Arsis Audio.

Mr Moore was recently appointed Head of Music Staff at the Houston Grand Opera and Music Director of the HGO Studio. He is also Music Director of the Fire Island Opera Festival, where he recently conducted Gluck’s L’arbre enchanté. Mr Moore was assistant conductor at the Metropolitan Opera for fifteen seasons, and has also worked as assistant conductor, backstage conductor and coach at the Salzburg Festival, Opéra National de Paris, the Canadian Opera Company, and the Los Angeles Opera.