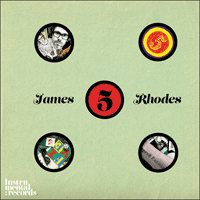 Five years on from his debut recording, James Rhodes has firmly established himself in the classical world as a pioneering figure—reaching out through concerts, recordings and television documentaries to create new classical music fans whilst remaining unabashedly dedicated to the core repertoire that he performs. In his fifth recital album from his new label Instrumental Records, he returns with a sumptuous programme of works of Bach, Beethoven and Chopin, the Gluck–Sgambati ‘Orfeo Melody’, and Liszt’s arrangement of Robert Schumann’s ‘Frühlingsnacht’.

'A sincere, communicative and mindful musician. He always holds your attention, whether or not you agree with each interpretative notion … Rhodes's fusion of instinct, mindfulness and individuality stand out in any era' (Gramophone)
'This engaging CD suggests Rhodes is finally comfortable in his skin. His readings of Bach's Partita No 1 and Beethoven's Pastoral sonata are fresh and lovingly detailed, while his Chopin Third Ballade is both fiery and judicious. The Gluck encore is exquisite' (BBC Music Magazine)

So this is my fifth album, and the more astute amongst you will have noticed it's on my new record label, Instrumental. If you're taking the time to read this then thank you. If you are a musician who has something to say and is able to do so in a way that is accessible, different and meaningful then get in touch and maybe we can record, design, release and tour an album together.

Bach, Beethoven and Chopin
As far as composers go these three are, for me, the holy trinity. And so it seemed apt to dedicate this album to them, with a couple of extras thrown in for good measure.

Bach wrote his six keyboard partitas 'for music lovers, to refresh their spirits'. Which is nice. The first is far and away the gentlest and least frenetic (listen to the gnarly, aggressive sixth to hear him off his meds). Forkel wrote the seminal biography of Bach in 1802 and said '… such splendid keyboard compositions had never previously been seen or heard. Whoever learnt to perform any of these pieces to a high standard could make his fortune in the world'. This was before music piracy, Spotify and file-sharing.

They were written between 1726-30 and self-published by Bach in 1731 as his opus 1. Such is the genius of Bach that his first published compositions contain with them everything one could ever wish to know about music. There is an erroneous perception of Bach by some people who see him as dry and unromantic—this could not be further from the truth. His life was soaked through by grief, heartbreak, fights, poverty, alcoholism and a work ethic that makes Obama look like an unemployed bum. All of which comes out in his music which was his sole escape from the death and misery that permeated so much of his life—for proof simply listen to the Sarabande of this partita.

Beethoven wrote his 'Pastoral' sonata in 1821 just before wrestling with the notion of suicide. He knew his hearing was failing him and that it was to be permanent and irreversible. As he often did during times of stress, he took himself off to the country and walked in nature to try and make peace with his various demons, and this sonata was one of the results of that trip. It was one of the first of his compositions to embody the concept of 'interiority'—moving away from overt virtuosity and going deep within, communicating through music his inner world. Personally, the opening symbolises his heartbeat and a retreat into himself whilst the last movement represents him walking through the countryside stopping every so often to rail against God and question everything. This is Beethoven moving firmly into his middle period and veering away from the earlier more virtuoso works of his youth. It is the start of Romanticism and the springboard into his Heroic Period, which followed shortly thereafter and changed the face of music forever.

Chopin: the musical freak from a tiny little bumfuck village outside of Warsaw who changed piano playing forever. Other than maybe Ravel, there is not a single other composer about whom one can say 99% of everything he wrote is still in active repertory today. The third ballade was written during one of many hellish holidays to Majorca with his crazy, dysfunctional girlfriend George Sand. The place they had originally planned to stay in was a total shithole and so they moved somewhere marginally better which involved traveling 18km up a dirt road on a donkey cart. And if you listen to the second theme of this ballade it actually does symbolise a donkey (no doubt skinny and dirty) wobbling up a long, relentless path. That said, it is far and away the cheeriest of his four ballades (the only one to start and end in a major key) and opens and closes with one of his sunniest themes.

His second scherzo, on the other hand, is, to quote Schumann, like a Byronic poem, 'so overflowing with tenderness, boldness, love and contempt'. It's full of everything that makes Chopin so immortal—rage, beauty, insufferable technical demands, vast soundscapes and heroism. Chopin wanted his students to play the opening in a manner that reflected an image of a mortuary—as far removed as possible from the saccharine, soppy, flowery perception some have of Chopin as a composer. The piano literature would be inconceivable without Chopin.

To give you bang for your buck and make sure the album is well over an hour long, I've included two encores. Gluck's genius aria from Orfeo and Euridice, transcribed for piano by Giovanni Sgambati and Schumann's song Spring Night, transcribed by Liszt. Piano transcriptions are something of a dying art and I have always loved them, even if I'm too lazy and untalented to arrange them myself.

As always, it is you who are listening to this that keeps my job and life so happy and exciting and I am grateful to all of you. Especially you.