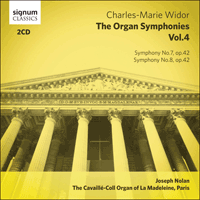 The fourth volume in our series of Charles-Marie Widor’s Organ Symphonies, performed by Joseph Nolan on the magnificent Cavaillé-Coll organ of La Madeleine, Paris.

'This is volume four in Joseph Nolan’s widely acclaimed journey through the complete organ works of Charles-Marie Widor. The Perth organist’s high standards show no signs of slipping, with magnificent accounts of Symphonies Nos 7 and 8' (Limelight, Australia)» More
'The balance between colourful detail and acoustic atmosphere is every bit as good as with all of the other symphonies so far' (MusicWeb International)

‘M[onsieur] Widor,’ chronicled the London Times in their obituary, 15 March 1937, ‘was one of the founders of what has become a great school of French organ composition and performance […] his most characteristic work is to be found in his organ symphonies written when he was at St Sulpice under the motto 'Soar above'. Symphony was a good name for a sonata of such firm construction and various colour as most of these were. Appearing when the organ sonatas of Merkel had outlived their fame, when it was beginning to be noticed that the attractive beauties of Rheinberger were overweighted by the mass of learning, when Franck was still caviare to the average congregation, and Guilmant had never yet quite succeeded in expressing with the pen his real genius as a player, these symphonies burst upon the world as the voice of reality […] His main feeling about the organ is elaborated in a preface he lately wrote, with that grace with which he did such things, to M[onsieur] Bouvet’s Les Couperin [Paris 1919]. He finds the organ’s suitability for religious worship in the suggestion of infinity given by its sustaining power. This may explain his fondness for “pedals”, “ordinary” or “invented”, […] and his skill in making long and complete sentences for either hand or for the feet. He is a true Frenchman in being seldom dull and never obscure.’

Exotically, readers were reminded, Widor from Lyon alleged Hungarian ancestry: according to unconfirmed family tradition his paternal great-grandfather, a regional commander in the Revolutionary Armée de Sambre-et-Meuse (1794-97), was Magyar-born. The claim that he’d been appointed organist to Saint-Sulpice at the age of fifteen was a fiction however: he was ten years older. That this post—offered ‘provisionally’ in January 1870 and met with ‘protest’ from Paris’s not inconsiderable organ fraternity—was never ratified by the church authorities in the 64 years of Widor’s tenure (he retired in December 1933) endures among the oddities of history. ‘Though his appointment certainly fulfilled the tradition that most organ positions were held for life if all the requirements by the church administration were met successfully, he [was] never made the official titulaire’ (John R Near). The master of Saint-Suplice’s grand orgue was a lifetime probationer.

‘Organ music of the future,’ the Seventh and Eighth Symphonies (1886-87) close the Op 42 quartet published in 1887 (Nos 5 and 6 having been printed earlier, in 1879). Commensurate with Widor’s penchant for ongoing renewal, structural as much as subtle, five subsequent editions of Op 42 appeared before his death: (a) 1888-92, (b) 1900- 01, ‘revised, and entirely modified’, (c) 1911, (d) 1914-18 [1920], (e) 1928-29. In his critical edition of the two works (1994) Near suggests they can be ‘paired aesthetically’. In them Widor ‘advanced a new, more complex musical language for the organ [… his] original concept of symphonic organ music, which included character pieces with an occasional bent toward a sweet salon style, is nowhere in evidence’. Dating from between the Paris Expositions of 1878 and 1889, of the same generation as Brahms Three and Four, Bruckner Seven and Eight, and Saint-Saëns Three, here are Jovian, Saturnian epics that are ‘fully products for a new age’—one of technological and engineering advance and ‘quickening human spirit’.

The Seventh is in six movements, the triple-time outer ones in sonata design. The uncompromising drive and cogency of the first, with its angular rhythmic patterns and short-breathed rests, manuals and pedals octaved at the start, fff, at once declares the toughness of Widor’s intentions. Likewise the brevity and assertive ‘no nonsense’ punctuation of the closing cadence. ‘The great majority of organists,’ Saint- Saëns knowingly reminded him years later (29 September 1919), ‘retreat terrified before your works’. The Finale, Near proposes, intensifies the atmosphere of the first. ‘Here is epoch-making organ music, new and thrilling—even hair-raising—in its conception.’ Its magnificent opening subject, Aeolian-cut on pedals against an open-fifth shield and short chordal daggers, lends itself to tight motivic development.

With its distinctively Neapolitan opening, the third movement is a sicilienne à la Mendelssohn in F sharp minor/major, Andante-Allegretto—bringing a touch of grace and light staccato to the proceedings. The central animato is in B minor. An intermezzo-toccata- étude in A minor à la Schumann follows. The most pianistically laid-out of any movement in Widor’s symphonies, its model, Near ventures, may lie in Liszt’s Vision, ‘the funeral of the first Napoleon advancing with solemn and imperial pomp’ (Busoni), the sixth of his Études d’exécution transcendante. ‘The main theme, in long notes [a minore form of the Choral cantus], rides over an accompaniment altogether extraordinary for the organ, a flurry of arpeggiated figuration […] that rises and falls like great waves.’ The second edition (1900-01) revised, readdressed and shortened the original text by 44 bars. Distantly recalling the Orphean pages of Beethoven’s Fourth Concerto, the lento fifth movement, in C sharp minor/major, journeys a high spiritual realm in contrasting paragraphs of proclamation and supplication.

Near identifies the first theme of the Choral as the Seventh’s Urmotif. Evidently related in contour and scale reference, though in neither key, harmony, metre nor bass-line, to the andantino of Franck’s Pastorale Op 19 dedicated to Aristide Cavaillé-Coll (1860-62), it variously informs each movement of the work, establishing a quiet, often subliminal, cyclic unity across the whole—at times near-Sibelian in anticipation.

One of the highlights of the 1889 Paris Exposition, singled out in his Souvenirs autobiographiques (1935-36), was Widor’s performance at the Trocadéro, on 3rd July, of the Eighth and Fifth Symphonies—the one, according to Ménestrel, ‘severe and highly elevated in style,’ the other ‘completely appealing’. ‘With the Mahlerian scope of the […] Eighth Symphony,’ says Near, ‘Widor seems to have exhausted the possibilities of his instrument, as well as his own compositional technique. The Eighth represented the ultimate achievement in the art of organ composition’ by the end of the 19th century. ‘Severity at first sight’ (letter, 10 April 1887), it was to be ‘the capstone to his organ works’. In its original form the Eighth comprised seven movements. In the 1900-01 revision, the fourth, a Prélude in A minor/major (preparing for the ensuing Variations), was withdrawn.

The opening 6/8 movement is nominally in sonata form in so far as it welds facets of exposition, development and recapitulation—but Widor refuses to be straight-jacketed by convention, expectation or prescription, exploring his material through a whole ebb and flow of sub-structures and dramatic tensions. Three ‘upward pointing’ anacrusis subject groups underline the first: A), a risoluto motif (falling octave led); B) a rising scale pattern (G sharp minor); C) a ‘halting’ phrase (interval led). These are then worked through in turn, with A functioning as a pseudo-rondo refrain—ABACA. On its final appearance A fuses reprise, development and coda into one.

Ongoingly developmental, the ternary second movement is a vocally-intoned E major modéré à la Mendelssohn, encompassing some of Widor’s most gracefully lyrical invention and ‘orchestration’. Jules Delsart, in his youth a pupil of Chopin’s friend Franchomme, famously arranged it for cello and piano. It’s offset by a 2/4 B minor third movement that’s less fairy scherzo more relentless, Hexentanz—phantom horsemen, creatures of the night, demons of ill-omen menacing the sky … With the D minor Variations Widor celebrates at Bach’s altar, sculpting a twin-climaxed passacaglia of a magnificence and strength to equal the mightiest in Beethoven, Brahms and Bruckner. Near thinks it ‘may be the greatest movement of the symphonies’. Theme … eleven entries … interludes, extensions, asides—rigour—fantasy. Poised and shapely, crystallised out of an ascending bass recitative (the ghosts of Weber or Rossini lurking somewhere within perhaps), the subsequent F sharp major Adagio glimpses gentler pastures—many voiced, with a central fugato—couched in harmonic terms diversely piquant and dolce, complex and simple.

Impelled by the falling F sharp octaves of the first movement’s opening, the 2/4 B minor finale is a large-scale ABACABA sonata-rondo. Albert Schweitzer didn’t like it: ‘what a shame that Widor wrote this!’ Riemenschneider, on the other hand (The American Organist, July 1925), admired its ‘almost barbaric splendour and exuberance’. A canvas of transcendental virtuosity and inexorable energy, organistically, pianistically, orchestrally imagined, its Eiffelsque girders and trellises, its shuddering currents of unassailable sound, silence men and move stones.