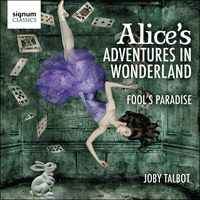 'Fool's Paradise, for string orchestra, evolved from a piano trio by Joby Talbot about which we are told relatively little in the booklet. It is a hauntingly effective score in four parts, in many ways even finer than Alice' (Gramophone)
'Joby Talbot is composer perhaps best known far his film and television work, especially A Hitchhiker's Guide to the Galaxy and the hit BBC comedies The League of Gentleman and Psychoville. He has also, however, worked with some of Europe's leading choreographers, including with Christopher Wheeldon on a production for The Royal Ballet of Lewis Carroll's Alice in Wonderland. A highlights disk of this score has just been released on Signum Classics. The music is quirkily tonal, unabashedly melodic, imaginatively orchestrated and virtuously (because it is well written) accessible. Some might argue that this delightful music isn't properly 'contemporary classical', to which I would blow a very large raspberry. If you like any of the standard classical ballet repertoire—Tchaikovsky et al—you will love this' (Composition Today)

“[Alice’s Adventures in Wonderland] is a book of that extremely rare kind, which will belong to all the generations to come until the language becomes obsolete.” (Sir Walter Besant, 1897)

Joby Talbot’s ballet scores for Alice’s Adventures in Wonderland and Fool’s Paradise were both created in collaboration with celebrated choreographer Christopher Wheeldon, who first approached Talbot after hearing his piano trio The Dying Swan. This latter work was originally commissioned by the British Film Institute in 2002 as a new score for the 1917 silent film of the same name by Russian director Evgenii Bauer, itself illustrating the assorted trials of a delicate ballerina in monochrome peril. The score’s yearning propulsion and exquisite dissonances evidently suggested to Wheeldon a greater kinetic potential, and so The Dying Swan for piano trio blossomed into Fool’s Paradise for string orchestra and a new life in ballet, premiering with New York-based dance company Morphoses at Sadler’s Wells Theatre in London in September 2007.

Later the following year, Wheeldon was offered the opportunity to choreograph a new full-length narrative work for The Royal Ballet. His choice of Alice’s Adventures in Wonderland was instant, Lewis Carroll’s illogical confection having been as much a favourite of his own childhood as of so many before and since. The potential for movement offered up by the author’s wild and witty imagination was irresistible, and besides, Wheeldon is an English alumnus of The Royal Ballet—what better fit than this very English story? While he was confident that ballet would lend itself admirably to the task, the matter of conjuring Wonderland’s wordy world without recourse to language demanded an approach that would be at the very least playful, if not quite hare-brained. Wheeldon’s next move was no more equivocal: he enlisted another Englishman—Joby Talbot.

Talbot has been quoted several times since as saying, with varying degrees of tremor, something to the effect that to have rejected such an offer would have been as nonsensical as the story he was being asked to tell. Alice was to be the first full-length narrative ballet score commissioned by The Royal Ballet in almost 20 years, and just as the heroine herself is equally delighted and terrified by the magical, brutal eccentricities of the world down the rabbit-hole, so Talbot found himself at once overjoyed and overanxious at the prospect of mobilising the experiences of an impressively varied career to meet this towering brief.

Several things reassured him: previous works for dance had been well received; a revisiting of the book suggested myriad exciting ideas; and though he had not written for narrative dance, there was plenty of screen scoring experience to refer to—though this latter comfort proved fickle. The greatest encouragement, however, was Christopher Wheeldon and the memory of an enjoyable first collaboration. Which was as well when Talbot found himself all but locked into the choreographer’s New York apartment for several days with fellow captive Nicholas Wright, the dramatist and, for the purposes of Alice, scenographer. Talbot explains: “We had the most wonderful few days flagging up possible insurmountable problems and finding ways to surmount them. It was a case of problems posing themselves, Chris thinking of a way to present them choreographically, me thinking how to present them musically, and Nick—and then Bob—thinking how to present them visually and theatrically.”

“Bob” in this case is the acclaimed production designer Bob Crowley, whose own career has successfully spanned all manner of theatrical genres and who brought to Alice an ingenious combination of exuberance and sophistication—a description that could as comfortably apply to both Wheeldon and Talbot’s contributions. A diverse creative history and the accompanying sense of possibility it engenders are common to all three, and liberated Alice’s development from the constraints of classical expectation. And yet, one strand of Talbot’s history was, in the context of this new challenge, quickly exposed as something of a false friend: “I thought that writing a narrative ballet would be more like writing film music than it turned out to be,” he admitted ahead of the production’s 2011 premiere. “Within an hour-long film score, only about ten minutes of music will ever really appear in the foreground to drive the narrative. The rest fits behind dialogue, provides atmospheric underscore or catches an emotional moment. In ballet, the music is absolutely in the foreground all the time: quite literally, the orchestra is between the audience and the people dancing on stage. So there’s not an easy second in it. As the composer, you’re never off the hook.” Even with this realisation assimilated, Talbot was staring down the prospect of writing music for a picture that could not exist without his music.

Armed with the precious scenography and its detailed timings, Talbot sat down to begin. He was sitting for some time: “One always expects a moment where it all starts to flow. You know that the first few minutes will be like pulling teeth but then gradually it will start to come together.” Fortunately some teeth remained by the time the Muse descended into a Shoreditch studio, at which Talbot was working on another production: “I locked myself in a room with a piano for an hour and came up with Alice’s theme, the White Rabbit’s theme, the opening music and a whole lot more, all scribbled on the backs of spare bits of music that were lying around. I started putting the themes together, then created a strange, shifting, bitonal tick-tock for Wonderland.”

Once entered, Wonderland revealed itself to Talbot much in the way one would imagine—capriciously, generously yet exasperatingly: “Narrative ballet is made up of small set pieces that have to concern themselves with illogical, unmusical considerations. You have to fool people into thinking that all these miniatures are joined together, so it was like building a house with just one room, then adding another, then another…” The two guiding elements were the updated storyline, which sees an adolescent Alice embarking on an innocent romance that occupies the narrative driver’s seat; and a notion of why it was that Wheeldon had appointed him to the role: “Fool’s Paradise had elements of creaky Edwardian tea dance music, but developed in a very modern way with arithmetical games. That may have been a facet of my music that appealed to Chris—given that his own work is steeped in classical ballet, but permeated by a very fresh sensibility—and when I sat down to write Alice I was mindful of the things that he’d liked about that previous score. So Alice contains melodic or harmonic gestural elements which wouldn’t seem out of place in a 19th-century ballet score, yet the whole thing is filtered through a minimal, arithmetical prism.”

The prism is strung together with themes, of which Carroll’s vivid—if not quite profound—characterisations were amply suggestive. Beyond themes and instrumental pairings for particular characters—the celesta with the White Rabbit; the oboe d’amore for the exotic Caterpillar; a (literally) highly-strung solo violin for the similarly taut Queen of Hearts—Talbot created a number of motifs for the changing moods of Alice, whose perspective on her bizarre surroundings occupies a more central position here than in Carroll’s original. “We see people from her point of view,” Talbot explains, “which means Alice can be grumpy, happy, sad or lonely or exhausted or confused. I could have fun with that musically; if Alice were just amused on the sidelines I’d soon run out of musical ideas. All these themes come back to tell the story, and sometimes what you are hearing is only one strand in a whole group of musical games that are going on.”

All of this orchestral colour requires skilful manipulation, not only to avoid a cacophonous blur but to wrangle it into a pit of proportions less Wonderland and more opera house. “I wanted the score to have that massive variety and scale, but you are limited by what can be squeezed into the pit: at the first orchestral rehearsal I was amazed to see that everything I’d asked for was actually there. There’s an awful lot of percussion.” The orchestrations were completed by Talbot along with long-time collaborator and friend Christopher Austin, who also conducts the Royal Philharmonic Orchestra in this recording.

The world premiere of Alice’s Adventures in Wonderland was given in a gala performance by The Royal Ballet and the Orchestra of the Royal Opera House under Barry Wordsworth at the Royal Opera House, Covent Garden, on 28 February 2011; a sold-out first run followed. The North American premiere by the National Ballet of Canada and its orchestra, under David Briskin, took place on 4 June 2011 at the Four Seasons Performing Arts Centre in Toronto, to a reception so enthusiastic that it made Alice the company’s highest-grossing production on record. Wheeldon, Talbot and Crowley, along with these two eminent companies, had delivered what all concerned were hoping for: a ballet with as much for the balletomane as for the uninitiated, and their children.