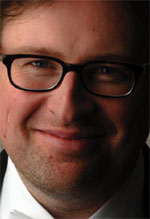 Christopher Austin is one of the UK’s foremost conductors of contemporary music and he has given more than 90 world and territorial first performances, demonstrating his extraordinarily wide musical sympathies. Premieres by such figures as John Adams, Luke Bedford, Peter Maxwell Davies, Tansy Davies, Michael Finnissy, Steve Reich, Poul Ruders, Bent Sørensen and Joby Talbot feature alongside collaborations with Michael Nyman, John Cale and The Divine Comedy. Recent work includes debuts with the Opéra de Rouen, Århus Sinfonietta, City of London Sinfonia and Chroma, alongside reinvitations from the London Sinfonietta, BCMG and the Royal Philharmonic Orchestra.

Highlights in 2012 included the first performance of Martin Creed’s Work No. 1375; premiere performances of Daniel Patrick Cohen’s new score for Hitchcock’s The Pleasure Garden as part of the Cultural Olympiad (and subsequently as part of the Rio Film Festival to an audience of 6000 on Copacabana Beach); and two concerts in Denmark for the 80th birthday of Per Nørgård in the presence of the composer.

Austin teaches composition, orchestration and conducting at the Royal Academy of Music. In 2009, his work there, in collaboration with the music critic Paul Morley, was the subject of a two-part BBC documentary called How to Be a Composer. His work as an orchestrator includes Alice’s Adventures in Wonderland for The Royal Ballet and Elysian Fields for the Rambert Dance Company.