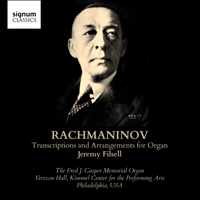 Transcriptions and arrangements for organ

'As a pianist, I have always been drawn to Rachmaninov’s music through its sheer grandeur of line, its contrapuntal beauty, its composer’s innate and callisthenic understanding of keyboard textures and indeed the considerable technical demands his music makes. Rachmaninov is the definitive pianist’s pianist'.

Jeremy Filsell, a world-renowned authority and performer on both the organ and piano, taps into his lifelong love of the music of Rachmaninov to create this programme of new transcriptions and arrangements for the organ, centred on the Op 45 Symphonic Dances.

'The dynamic range is excellent, there is real presence, a sense of acoustic space and the innumerable instrumental timbres on offer are vividly recreated … the sound is very, very good … this is an issue that allows one to see a great composer in a new light, and as such is well-worth investigating' (Audiophile)» More

Rachmaninov at the organ: an idea to incite the purist’s horror? It is true that Rachmaninovhad little connection with the instrument, although he was a periodic visitor to Marcel Dupré’s organ loft at St. Sulpice in Paris, for both composers enjoyed a friendship with Nikolai Medtner, one whose (non-organ) music Dupré actively championed in France. Instinctively, Rachmaninov and the organ do not appear natural bedfellows and a defence from the perpetrator of this artistic contention should perhaps be mounted.

As a pianist, I have always been drawn to Rachmaninov’s music through its sheer grandeur of line, its contrapuntal beauty, its composer’s innate and callisthenic understanding of keyboard textures and indeed the considerable technical demands his music makes. Rachmaninov is the definitive pianist’s pianist, to which countless recordings and re-recordings of his music have testified over the past half century. Rachmaninov’s music is not only intrinsically pianistic, but it is also finely wrought compositionally. The pacing of climax, the gift for melody, the tautness of large-scale structure and the often rhythmicallydriven contrapuntal brilliance make for a heady and compelling mix. It is such characteristics which perhaps have justified his music’s frequent translation to other media. Most of those reading this will be aware of Earl Wild’s solo piano recreations of Rachmaninov’s songs, the transcriptions by many others of the Vocalise Op 34 No 14, and perhaps the recreation of his Second Symphony as a fifth piano concerto by Alexander Warenberg. Perhaps these stir the pot for the purist, to which I have admittedly added another ingredient here. However, there can be little doubt that all rebirths of this music shed interesting and personal light on remarkable expression. Moreover, we cannot ignore Rachmaninov’s own predilection for re-working with impunity in his own performing life, the music of Tchaikovsky, Saint-Saëns, Mendelssohn, Schubert et al.

The catalyst for my own organistic re-imaginings here is my lifelong love of the Symphonic Dances Op. 45, the first movement of which utterly riveted me at the age of 15. This three-movement work—the last orchestral and arguably the most rhythmically vital symphonic music Rachmaninov wrote—has thus been a continual ‘earworm’ for me for many years. Over time, and because of its direct and at times visceral dynamism, I have ‘heard’ this music on the ‘right’ organ (perhaps not a traditional eclectic instrument which might lack that front-of-the-note energy, but one where pipe speech is governed by real clarity and brilliance), particularly in the outer movements with their angular and seemingly obsessive rhythmic character.

It was not until 2009 that I managed to work with both the orchestral score and Rachmaninov’s own two-piano version of Op 45. However, it was not long before I became drawn increasingly to the two-piano version, for two reasons. Firstly, Rachmaninov’s callisthenic instincts can hardly be bettered, and wind and brass figurations here already seemed so effectively realized on the keyboard that I felt I could not (and perhaps should not) add anything further. Secondly, although most of this music is overtly rhythmic, the orchestral score involves myriad colour changes within scintillating, kaleidoscopic textures. To my ear, many orchestral transcriptions (of more challenging symphonic repertoire perhaps than this) have attempted to emulate orchestral sonorities, sometimes to the detriment of line, momentum and symphonic ‘sweep’. It is indeed tough for one person, even seated at the ‘king of instruments’, to control such colour complexity successfully without musical compromise, and I have often been struck the organ’s shortcomings by comparison with the orchestra as a result.

My approach to the Symphonic Dances has therefore been to attempt to ‘re-realize’ or ‘re-create’ rather than transcribe; to re-imagine the music in terms of the organ and not to attempt to coerce the instrument into doing what the orchestra instinctively can—undoubtedly a vain hope in any case. Moreover, I have attempted to imagine the colours Rachmaninov might have envisaged, had he been writing for the organ, and have tried to retain the performer’s ability to maintain momentum and energy, without having to mimic the infinite variations of orchestral colour. This may indeed be a further musical betrayal of Rachmaninov’s intentions, yet this remains great music, born of a time late in the composer’s life, when his aesthetic (influenced undoubtedly by the neo-classicism prevalent contemporaneously in both Europe and America) dictated a desire for greater transparency of texture and an overtly rhythmically-driven style of writing. If this music’s translation to the organ remains contentious, it is notable that, as with all great music, it transcends its medium.

Rachmaninov wrote the Symphonic Dances at the Honeyman estate, ‘Orchard Point’, in Centerport, New York, overlooking Long Island Sound. Originally given the titles of Noon, Twilight, and Midnight, Rachmaninov decided against these programmatic designations for the three movements at publication. The score was completed in October 1940 and premiered by Eugène Ormandy and the Philadelphia Orchestra, to whom it is dedicated, in January 1941. That we recorded this disc here in Philadelphia, on the organ in the new home of the Philadelphia Orchestra seems more than apt for this reason. The first movement, for the most part rhythmically energized and driven, ends with a quotation from Rachmaninov’s own First Symphony (1897), a work that had attracted the ire of critics at the time; criticism that had induced both despair and a period of creative atrophy for the composer for four years thereafter. Characteristic of Orthodox Russian church music, this theme is transformed in its appearance here from its originally rugged, minor key character into something more radiant and delicate in the relative major (C): a serene moment. The ghostly second movement often seems a musical play on light and shadow—a macabre and ghoulish waltz. Obsessive in the third movement is the battle for supremacy of the Dies Irae and the Resurrection chant Blagosloven yesi, Gospodi (Blessed be the Lord thy God) from Rachmaninov’s own All-Night Vigil (1915). The Resurrection theme is victorious at the end, for Rachmaninov writes ‘Hallelujah at end of the score.

In the summer of 1931, Rachmaninov worked simultaneously on his Fourth Piano Concerto and the Variations on a theme of Corelli, a work which proved to be his final one for solo piano. The theme he adopted perhaps points to his then burgeoning neo-classical persuasions.

Certainly, the Variations date from a time when the composer was preoccupied with thinning out, if not excising, his music (see the hatchet taken to the Fourth Piano Concerto and the Second Piano Sonata). La Folie was not actually composed by Corelli, yet the attribution has persisted. Rachmaninov sets thirteen variations that precede an extended cadenza. This leads to the emotional heart of the work in the flattened tonic major key (Db). The final variations are then wild and sweep towards a ‘light at the end of the tunnel [which] allows the right hand to soar into a beautiful melody over several octaves [offering] the briefest ray of hope’ at the last (Robert Matthew-Walker). This adaptation of Rachmaninov’s music to the organistic environment is theculmination of my having played the work as a pianist for a number of years. The music’s comparative ‘leanness’ in textural terms and, once again, its largely rhythmic progress suggest an aptness for re-realization here.

There are few of Rachmaninov’s works, outside Op 42 and 45 that have struck me as potentially ‘organistic’, yet the final Etude-Tableau Op 39 No 9, which I have often played in its original incarnation, has seemed a natural candidate. It is perhaps no accident that the principal musical feature here is, yet again, rhythm in a stomping, march-like but brilliantly energetic keyboardistic firecracker. The gigue-style Fugue (1891) is a student work dating from Rachmaninov’s years under Arensky at the Moscow Conservatoire. Not perhaps an obvious form in which to work for Rachmaninov, his contrapuntal studies under Anton Arensky and SergeiTaneyev nonetheless translated into the complex linear textures adopted in early works (see the Moment Musical Op 16 No 4). This concise but brilliant fugue, exercising as ever the technical aplomb of its player, seems a natural fit for the organ. The two other works here—Vocalise Op 34 No 14 and the Prelude Op 32 No 11—serve more as amuse-bouche than anything else. My good friend and colleague, Nigel Potts, transcribedVocalise during his graduate studies at Yale and his re-casting of the music in C# minor carries more emotional weight, it seems to me, than certain other re-workings in—admittedly easier—keys. It is evergreen music and the beauty of its utterance transcends, as always, its medium.

The Fred J. Cooper Memorial Organ
Verizon Hall, Kimmel Center for the Performing Arts, Philadelphia, PA
Dobson Organ Builders Opus 76
Verizon Hall, in Philadelphia’s Kimmel Center for the Performing Arts, is the home of Dobson Op 76, America’s largest mechanical action concert hall organ. Also home to the Philadelphia Orchestra, the Kimmel Center was designed by New York architect Rafael Viñoly. The acoustical design is the work of Russell Johnson of Artec Consultants, Inc., also of New York. To accommodate differing events and ensembles of various sizes, Verizon Hall’s acoustics can be adjusted by the use of a movable canopy, drapes and reverberation chambers. Verizon Hall seats 2,500 people. The organ is placed above and to the rear of the stage and contains 6,938 pipes. The casework is arranged in a broadly curving arc, and lean outward at a four-degree angle, coinciding with the architecture of the Hall’s balconies. This is the first instrument ever constructed with pipes of this size mounted in this manner.

The organ’s main console is located below the façade and operates the organ mechanically. A second, movable console that allows the organ to be played remotely is also provided for use on the stage.

The facade, casework and largest 32’ pipes were installed during Phase 1 in the fall of 2001, so that the appearance of Verizon Hall was complete for its opening on 16 December 2001. Because the Hall is in use during the season, installation of the rest of the organ took place in Phase 2 during the summers of 2004 and 2005. Tonal finishing began in October 2005, with the voicers working through the night so that the regular events of the Hall were not disrupted. The design and the scaling of the instrument was a collaboration between the Dobson firm and Los Angeles organ builder Manuel J. Rosales.