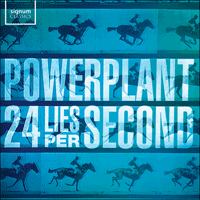 'Fascinating but more esoteric, each item's intention and techniques well explained in Joby's notes—he is a twenty-first-century explorer at the edge. Riveting!' (Musical Pointers)

I have collaborated with British composer Graham Fitkin for more than a decade, initially through my performances with ensemblebash and more recently with his own Fitkin Band.

In 2008 I asked Graham if he would write for my electronic mallet controller, the xylosynth—described by The Guardian as a hybrid instrument somewhere between a xylophone and a synthesizer. The resulting Chain of command is constructed entirely from vocal samples taken from speeches by George Bush and Donald Rumsfeld, about Guantanamo, the Iraq war and the inquiry into prisoner abuse and torture at Abu Ghraib. Carefully edited and manipulated syllables are slowly rebuilt using live looping into words and phrases over the 12 minutes of this confrontational and direct work, which examines the use of constantly looped, loud music, 24 hours a day, as torture at Guantanamo.

British composer and music researcher Matthew Fairclough has worked extensively developing a musical language incorporating electronics for over a decade, and has handled sound design for all of my live projects since 2002. The boom and the bap refers to the kick drum and the snare drum, taking initial inspiration from the Amen Break—six seconds of a drum solo (break) from 'The Winstons' 1969 Amen, Brother—the most heavily sampled break in history. Matthew has used the original instruments fused with live computer processing, to create his own unique take on one of popular music’s most important moments.

British experimental composer and instrument-builder Max de Wardener’s three short pieces for percussion, take inspiration from the work of Austrian film director Michael Haneke. 'Film is 24 lies per second at the service of truth, or at the service of the attempt to find the truth.'

Haneke’s words represent the genesis of this project, along with the harmonic series, which features prominently in the music for xylosynth and White ribbon for solo glockenspiel, to create music of child like innocence, with sinister undertones. Im Dorfe is Max’s response to the 2001 film The Piano Teacher, a twisted mash-up derived from Franz Schubert’s song of the same name, from the song cycle Winterreise. Three pianos of varying preparation provide the accompaniment, for a roller coaster of drums, driven forward by an ever-accelerating metronome. A new extended arrangement of Until my blood is pure (for vibraphone) is taken from Max’s 2004 album Where I am Today, crafted by Max and Leo Chadburn.

American composer Conlon Nancarrow is best known for his extraordinarily complex pieces for player piano, written in almost complete isolation from the mainstream of musical society at his home in Mexico City. During his early player piano days, Nancarrow had attempted to make a mechanical percussion orchestra but gave up, after deciding that the engineering was beyond him, instead using recordings of the percussion instruments to piece together an early tape composition (c1952) of superhuman virtuosity. Now over half a century later British composer Dominic Murcott has made the first arrangement of Nancarrow’s Piece for tape (for Percussion), in a new version for myself. Employing the same set of percussion, Dominic’s own Armed response Unit adds electronic sounds and live computer processing to create a companion piece that extends and plays with the sonic language of Nancarrow’s Piece for tape. As with the Nancarrow, the tangled textures are often underpinned by simple pulses, which the listener may or may not detect through the aural camouflage.

My name is Steve Reich (1936-)
Described by The New York Times as 'our greatest living composer' and The New Yorker as 'the most original music thinker of our time', the music of Steve Reich manages to transcend regional or cultural boundaries, incorporating influences from around the world. A first generation minimalist, Reich places repetition, the use of speech and field recordings at the centre of his vast body of work. After the success of my earlier arrangement of Electric counterpoint (version for xylosynth) I was keen to explore more of Reich’s work, and after conversations with Steve during 2010, I decided we would tour his little-known early work My name is. Replacing 1960s tape with computer processing, we create a unique phasing performance by recording, editing and mixing audience members response to the question, What is your name?