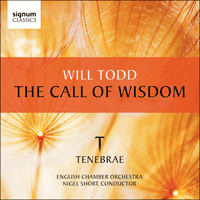 The Call of Wisdom & other choral works

Will Todd is one of the UK's most popular and performed modern choral composers. His output includes works for choir, stage works, and orchestral works, and his music has been featured on BBC Radio 2, 3 and 4 and Classic FM, and performed all over the UK, Europe and the USA. Here, Nigel Short conducts superlative performances of his works by his BBC Music Magazine Award-winning choir Tenebrae and the English Chamber Orchestra. This compilation of his works includes the premiere recording of a comission The Call of Wisdom, which on 5 June 2012 was presented on the occasion of a Service of Thanksgiving at St Paul’s Cathedral for the Diamond Jubilee of HM Queen Elizabeth II.

‘Will Todd's moment in the glare of popular consciousness came in June when his anthem The Call of Wisdom was sung at the Queen's Diamond Jubilee service in London … under the graceful direction of Nigel Short, the 22 mixed voices of Tenebrae imbue it with a warm, comfortable glow' (Gramophone)
'Is Will Todd slowly morphing into the new John Rutter? This soothingly mellifluous collection of 12 short choral pieces suggests as much. Tenebrae, a crack choir, sings it all immaculately' (BBC Music Magazine)

I have been extremely fortunate to have been championed by John Studzinski and his Genesis Foundation and to have been consistently supported by such a perceptive individual and organisation. Artists need support for their voices to be heard and I am grateful and humbled by the opportunities Genesis have offered me. I was commissioned by the Genesis Foundation to write Among angels for performance by Harry Christophers and The Sixteen in Salzburg in celebration of John’s 50th birthday. This was the beginning of our relationship and I’ll never forget my first meeting with John when he quizzed me in depth about angels, choral textures and many other things both musical and spiritual. I came away with my head reeling but determined to create as strong a piece of choral music as possible. I wanted it to be worthy of John, but also for the music to be as expressive as possible and to touch people, and as someone with a lifelong love of choral music that opportunity to work with a top quality chamber choir like The Sixteen was a dream come true. Among angels has gone on to be one of my most popular and critically acclaimed compositions, with several recordings and many performances since the premiere in 2006.

From that first commission followed OperaGenesis workshops at the Royal Opera House of my opera Pusila, leading to a second Genesis commission. This was for a choral piece based on a Padre Pio prayer Stay with me, Lord also performed by Harry Christophers and The Sixteen, this time at a packed Westminster Cathedral alongside Padre Pio commissions from James MacMillan and Roxanna Panufnik. It gives me immense satisfaction that the Padre Pio CD has received praise from around the world and that my setting has been performed and enjoyed by choirs and congregations all over the country.

My friendship and collaboration with John Studzinski and the Genesis Foundation has been inspiring and nurturing. Quite simply, neither commission included on this recording could have been brought to life without their vision and support. On this disc these pieces are paired with other favourites from my choral repertoire, in several cases featuring new arrangements for the recording.