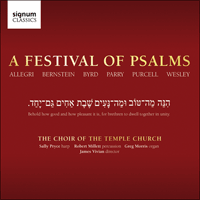 A Festival of Psalms

The Psalms of David are arguably the portion of the Old Testament that has been enfolded most completely within the Christian tradition and its liturgies. Their messages of strife and joy, prayer and praise, resonate strong and loud alongside the teachings of Jesus, and find special expression in musical settings. This album is an exploration of all these themes, as interpreted by composers over the course of four and a half centuries—with music by Allegri, Bernstein, Byrd, Parry, Purcell and Wesley. The Temple Church is one of the most historic and beautiful churches in London. Situated between Fleet Street and the Thames Embankment, its recorded musical history extends back to its restoration in 1841, although a church has stood on the site for over 800 years.

'Apart from the variety of this great music, the polish of the choir's singing, combining a beautifully honed treble line with characterful yet restrained adult voices, is all recorded with fine balance. Copious sleeve notes add value to a very attractive release' (Choir & Organ)» More
'Taking as its theme the use of psalms in choral music, this anthology links the liturgies of Jewish and Christian traditions, represented respectively by Leonard Bernstein's Chichester Psalms and various European strains from Byrd and Allegri to Purcell and Parry. Incorporating leftover music from West Side Story, Bernstein employs organ, harp and percussion as he extends a theme of peace and unity between nations from the opening Jubilate, to the restful uplift of Psalm 131. The organ can sometimes hang too heavily over the pieces by Wesley and Parry. But the highlight is the beautiful version of Allegri's Miserere mei, Deus, with its solo treble soaring high and weightless likes the vaulting of a cathedral' (The Independent)

The psalms are at the heart of both Jewish and Christian liturgies and traditions. Their messages of strife and joy, prayer and praise, resonate strong and loud alongside the teachings of the Torah and of Jesus, and find special expression in musical settings (after all, the Greek word psallein means to make music, particularly on stringed instruments). This disc is an exploration of all these themes, as interpreted by composers over the course of four and a half centuries.

Leonard Bernstein was commissioned to write his Chichester Psalms in 1965 by the then Organist and Dean of Chichester Cathedral, John Birch and Walter Hussey. (John Birch succeeded Thalben-Ball as Director of Music of the Temple Church in 1982.) With a brilliant clarion call, Bernstein launches them: ‘Awake, psaltery and harp: I will rouse the dawn’. Thus the party begins, with the most festive of settings of Psalm 100, better known to all mattins-goers as the Jubilate. The orchestration of organ, harp and percussion, the most frequently-discussed parley of instruments in the Psalms, is a stroke of genius, though inevitably poses challenges of coordination and balance to the conductor. The second movement is the well-beloved Psalm 23 (‘The Lord is my shepherd’), interrupted dramatically and aggressively by portions of Psalm 2 (‘Why do the nations rage so furiously together, and the people imagine a vain thing?’), preoccupations as relevant today as in 1965 when the work was written, or 1741 when Handel set the same text as part of his Messiah. The main theme, given memorably to a treble soloist (as ‘David’), actually originated in an unfinished musical, The Skin of our Teeth, and the central section’s outburst was unused material from West Side Story: recycling at its best. The last movement continues the lyrical vein, being a setting of Psalm 131, a song of repose in the Lord. In the coda, which brings back the opening motifs of the piece, Bernstein makes absolutely plain his agenda with the words ‘Behold how good and how pleasant it is, for brethren to dwell together in unity.’ These pacifist sentiments surface in a number of other works by Bernstein, including the Kaddish Symphony and the Mass. In notes he made while writing the Mass, Bernstein wrote, ‘You scream for peace, you won’t get it that way…only peacefulness can engender peace’. The Chichester Psalms certainly echo this theme in their own way.

Allegri’s ever-popular Miserere has an interesting and contentious history. It was probably written around 1638, and joined a lengthy list of other settings of the Miserere to be sung during the Tenebrae services of Holy Week in the Sistine chapel. It quickly gained a position as the pre-eminent setting, and attracted a dedicated following. Legend springs up quickly from this point onwards; the Vatican allegedly banned performance and copying of the work beyond the walls of the Sistine Chapel. It was said that breaking the embargo carried the penalty of excommunication. However, copies were leaked out by various means over the next 150 years, until Charles Burney had it published in London in 1771, when the embargo could hold water no longer and was lifted. Burney’s version may have been based on Mozart’s copy, written out from memory after his 1770 visit to the chapel. Mozart was hauled in by the then Pope, but instead of exacting the threatened punishment the Pope lavished praise on him for his feat of memory—a rather nice twist in the usual tale of papal boorishness.

Establishing what the original version of the Allegri Miserere might have sounded like is virtually impossible. The transmission of the piece from the early 17th century to today’s ‘classic’, complete with soaring solo treble, is like a game of Chinese whispers, in which Mozart, Burney, the Grove Dictionary and possibly Mendelssohn were all participants. The Vatican embargo on copying, coupled with the fact that the very feature which captured everyone’s imagination was never written down (the improvised embellishments to the written polyphony known as ‘abellimenti’), mean that we really only have echoes of what the original piece was like. The version that has coalesced today, performed on this disc in an edition by John Rutter, may capture something of the florid arabesque for which the Sistine Chapel choir was famous, but is unlikely to represent either the correct pitch or texture that Allegri set down. Whatever the degree of authenticity about this piece, what is undisputed is Allegri’s mastery of chordal sonority—that much is evident from his other, little-performed church music—and his capturing of the solemnity of Holy Week in arresting terms.

Byrd’s Teach me, O Lord, with its alternatim style of solo versus full sections, has a ritualistic rhythm to it—testament to its origin not as an anthem but as a festal psalm setting. One wonders which feast its text on obedience might have fitted (it is interesting to note that Byrd, like Wesley, was brought to heel by his clerical employers over a disciplinary matter). The piece is likely to date from Byrd’s early career at Lincoln Cathedral, ie before 1572. The simple and clear style of word-setting bears the stamp of the puritan reformers, who formed a powerful lobby at Lincoln. If their directives were intended as limitations to musical free rein, Byrd developed the simple chordal style, such as we hear in this piece, into a thing of considerable charm; one of history’s minor, yet delicious, triumphs of art over dogma.

Samuel Sebastian Wesley was sworn into post as Organist of Winchester Cathedral on October 5th 1849, following periods of varying contentment at Exeter Cathedral and Leeds Parish Church. Ascribe unto the Lord was written in 1851 and published in 1853. A number of anthems date from early in his Winchester tenure, perhaps indicating a happier accommodation to the church yoke than in his previous appointments. In Ascribe, Wesley rides the post-Elijah wave of enthusiasm for the theme of condemnation of idolatry. Indeed, this work is almost a condensation of Mendelssohn’s work into anthem form. Choral recitative at the opening, small groupings of upper voices (‘O worship the Lord in the beauty of holiness’) and Handelian fugue (‘As for the gods of the heathen’) all echo Mendelssohnian textures, and are a similarly robust response to the Psalmist’s exhortation to back the right divine horse. Wesley casts the Psalmist’s sneers at the heathen (‘They have mouths and speak not’, etc) into suitably indignant phrases, guaranteed to raise a wry smile from the Cathedral lay-clerks charged with delivering them. All but nine of the Cathedrals and collegiate churches of England and Wales subscribed to Wesley’s Anthems when it was published, and also a certain Franz Liszt, who presumably signed up when he was in Exeter—a testament to the vanguard position held by Wesley in contemporary church music.

Though it seems churlish to point it out in such a charming piece, pragmatism was probably a prime mover in the composition of Thy word is a lantern. As in a number of Purcell’s anthems, the full choir has relatively little to do, the bulk of the piece being given to soloists and groups of ‘verse’ singers. Was this due to pressure of rehearsal time or even a decline in standards? It is difficult to say, as we cannot presently date the work with any degree of accuracy, though it is probably from before 1687. There were a number of fine singers in Purcell’s Chapel Royal choir (the bass John Gostling was often singled out for special praise) so it may simply be that in solo singing lay the choir’s strength. Either way, the piece obviously caught people’s imagination, as it was copied out many times in the 20 years after Purcell’s death.

Parry’s Hear my words, written for the Salisbury Diocesan Choral Association’s Festival in 1894, was first heard sung by around 2000 singers, including 400 in the semi-chorus and accompanied by the brass ensemble of the Portsmouth Royal Marines. Responding to the practical needs of such a large gathering of forces, Parry writes much in tuneful unison for the main choir, but intersperses demanding solos for bass and treble, aria-like in their breadth, and stirring instrumental interludes. The brilliant ‘all together now’ of ‘O Praise ye the Lord’ brings the piece to a roof-raising conclusion. In the same way that the tune Repton (‘Dear Lord and Father of mankind’) was extracted from his Oratorio, Judith, Parry later adapted ‘O Praise ye the Lord’ as the hymn-tune Laudate Dominum, contributing yet another ‘classic’ to the hymn book.