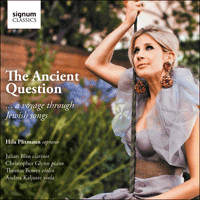 … a voyage through Jewish songs

The grammy-award winning artist Hila Plitmann is known worldwide for her astonishing musicianship, light and beautiful voice, and the ability to perform challenging new works. On this album she brings together a very personal programme that draws on her familial roots in Jewish culture and song; from traditional folk music (Five Yiddish Songs), to contemporary compositions (Bridges of Love, Tehilim and I Never Saw Another Butterfly). The album also features the Five Hebrew Love Songs, with poetry by Plitmann set to music by the composer Eric Whitacre (her husband).

'Whitacre achieves a disarming memorability with the simplest of means, and I wouldn't be at all surprised if his cycle, scored for soprano, violin and piano, gains considerable popularity. Israeli Aharon Harlap's 'Tehillim' has a rhapsodic grandeur that is strongly reminiscent of Bloch while fellow Israeli composer Sharon Farber's 'Bridges of Love', conceived on a more extended scale, is not quite so distinctive even though it's performed here with great emotion' (BBC Music Magazine)» More

In the winter of 1997, I was preparing for my graduation recital from Juilliard and looking for a programme which was meaningful to me personally. My Grandmother was born in Russia, and I am of Jewish descent. I wanted to find pieces I could connect with. Both my Grandmother and Mother loved Yiddish songs, and I would hear them sung throughout my childhood; however I could only find the traditional folk arrangements, oftentimes with only the simple melodic lines written out. Eric Whitacre (my boyfriend at the time, now husband) suggested I make new arrangements of the pieces, and although I was reluctant at the beginning I painfully churned out my first arrangement of the five Yiddish Songs for piano, clarinet and voice. The last song in the collection is one of the more well-known Yiddish songs out there. I find an incredibly strong connection with the simplicity and beauty of these songs.

When putting together a programme for the recording, I was looking for a musical thread to connect the repertoire and to create a cohesive journey. I was searching the internet and accidentally stumbled upon the cycle of pieces I never saw another butterfly by Lori Laitman, whose work I had not performed previously. I read the poetry, written by children who lived and died in the concentration camp Terezin, and it struck me so deeply that I ordered the music. Lori originally composed for soprano saxophone and voice, but later orchestrated for clarinet and voice. The combination of these two instruments creates a meaningful, poetic sound, infused with melancholic hope, longing and despair. The clarinet part is unbelievably demanding—it requires an exquisite player to pull it off dramatically, and I find one needs to muster quite a bit of courage to perform these pieces as they are written so elegantly and economically that the players are very exposed.

Sometimes the universe delivers it’s sweetness and things simply fall into your lap. Aharon Harlap is a dear and admired colleague from Israel and I have sung his compositions in the past, but these Tehilim (Psalms) came to me out of the blue, exactly at the time when I was searching for such a work. They are written for clarinet, piano and voice and are based on three Psalms from the Bible. They carry a sense of majestic celebration and a triumphant atmosphere. There’s an incredibly dramatic element in the music, as well as Aharon’s awesome flair for combining Middle Eastern traditions with Western classical music.

The Five Hebrew Love Songs are very meaningful and personal. I felt that most of the cycles in this disc carry a burden with them, a heaviness and a sadness. I needed a bit of something more uplifting, and these five songs were written about innocent, beautiful, and simple love. This was my first time writing poetry for a musical composition, and I had no idea what Eric wanted or what I would write; but with a recital pending in Germany (with our friend and superb violinist Friedemann Eichhorn) I ended up spurting them out in an hour and a half. They are mini poems, a bit like haikus, with inner rhyming, and are reminiscent of our relationship and romance. These have been a work of inspiration for me throughout the years, and I have recently continued writing poetry for my own songs that I hope to release one day.

A couple of years ago I was asked by my dear friend Sharon Farber (a Los Angeles-based composer who writes for both film and the concert stage) to come and sing the soprano-version premiere of Bridges of love in Los Angeles. I fell in love with this magnificent work and was so thrilled at the chance to record it. This cycle also conveys an uplifting and inspirational message, and I found the first two poems written from the non-romantic feminine point of view to be fascinating. For me, the pieces have a connection with Tehilim, as Sharon possesses an uncanny gift of combining Middle Eastern taste with Western style using subtle and beautiful melodic lines.