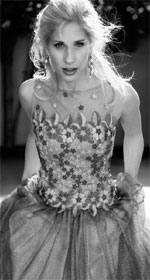 In constant demand as a singer of new and contemporary music, Hila has appeared as soloist in several world premieres, including Paul Revere’s Ride with the Atlanta Symphony, written by Pulitzer Prize-winning composer David Del Tredici, Esa-Pekka Salonen’s Wing on Wing with the Los Angeles Philharmonic under the baton of the composer, Mr. Tambourine Man written by Oscar and Pulitzer Prize-winning composer John Corigliano with the Minnesota Orchestra and Two Awakenings and a Double Lullaby, a song cycle written for her by Pulitzer Prize winner Aaron Jay Kernis.

Hila premiered the role of Exstasis in Eric Whitacre’s groundbreaking electro-musical Paradise Lost: Shadows and Wings. Hila sang, acted, danced and fought in long martial arts battles nightly for a seven week sold-out run, a tour-de force performance that prompted Backstage West to call her, “brilliant, eliciting strong empathy and singing gorgeously,” and Theatre Mania to declare she “fights like a warrior and sings like the angel she portrays.” For her work in the show she received nominations for Best Actress in a Musical from the Los Angeles Ovation Awards and The L A Ticketholder Awards.

Hila has accumulated an impressive catalogue of professional recordings, appearing on the Decca, Telarc, Naxos, CRI, Reference Recordings and Disney labels. The Da Vinci Code soundtrack (Decca) was a worldwide bestseller, spending several weeks on the Billboard charts. Both Paul Revere’s Ride (Telarc), and The Da Vinci Code received Grammy nominations, and in 2009 Hila won the Grammy for ‘Best Classical Vocal Performance‘ for her work on the Naxos recording of John Corigliano’s song cycle Mr. Tambourine Man with the Buffalo Philharmonic Orchestra. Hila can also be heard on the soundtrack of the film New York, I Love You.

Born and raised in Jerusalem, Hila received both her Bachelor and Master of Music degrees, with high honors, from the Juilliard School of Music, and has been awarded the coveted Sony ES Prize for her outstanding contribution to the vocal arts. Hila currently lives in London with her husband (composer, Eric Whitacre) and their son. She has a Black Belt in Tae Kwon Do.