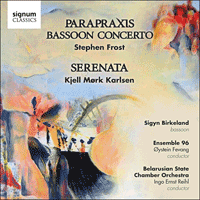 A seductive and fascinating album for fans of contemporary music, this collection of works for Bassoon with choir and orchestra feature works by British composer Stephen Frost and Norwegian composer Kjell Mørk Karlsen.

The album’s title work Parapraxis, for solo bassoon and choir, melds together a mix of sacred latin text and secular English poetry, pushing and playing with the illusory ‘boundary’ that seems to exist between the two. The other two works—Frost’s Bassoon Concerto and Karlsen’s Serenata—are beguiling and stimulating pieces that show off the talents of Norwegian bassoonist Sigyn Birkeland and the Belarusian State Chamber Orchestra.

In demand as a soloist, Sigyn Birkeland has been Principal Bassoon in the Norwegian Radio Orchestra since 1992. She continues to champion the instrument by commissioning, performing and recording new works for the instrument in a variety of unique ensembles and settings.

'An intriguing programme of modern bassoon pieces' (The Independent)» More

Bassoon Concerto
It is a long time ago now, when I first put pen to paper (or more accurately cursor to computer screen, as it was even then in 1996!) and started work on a Bassoon Concerto for Sigyn Birkeland. The idea was to use a microphone and amplification system on the Bassoon in order to be able to open up the orchestration. This worked well enough for the recording we made in 1999, but for live performance it was, frankly, a mistake. Time passed and when, almost a decade later, the opportunity presented itself to re-orchestrate the piece for a new recording, I grabbed at it. Some decisions about resizing and reconforming the piece were easy, some less so, but any regrets in that area were overridden by my wish to make the piece more accessible and, quite simply, performable. Some sections have been re-written to make sense of the smaller ensemble, and some have been re-written because they had always troubled me a little in terms of their musical content as well as their function in the overall shape and architecture. Whilst much still remains the same, I think it also has the feel of an entirely different piece, and as such I don’t wish one to replace the other. They are rather like non-identical twins!

I would also like to say this: the events of 13th March 1996 affected me more than any other public tragedy or disaster had before or since, probably because at the time I had a four-year-old son of my own and found myself strongly identifying with the parents of Dunblane. I was in the middle of writing my Bassoon Concerto and was just starting work on the second movement. I know now that the music began to reflect my state of mind: the brooding Scottish landscape; the lone piper on the hill; the innocent children being taken away (a theme I would return to in my Flute Concerto: The Pied Piper of Hamelin). And finally the image that haunted me most of all: the bereft mother.

It would be quite wrong to describe my Bassoon Concerto as being inspired by the events of that day and it is certainly not 'about' them. The first movement, after all, was already written, and the last is a party. It is just that Dunblane changed me, and therefore some of this piece changed too, behind my back as it were. I mention it simply because the subject still seems to infect almost everything I do. I often think aboutthe implications of that day and what it means to be a human being: some people leave, and some people stay behind to remember their leaving.

Parapraxis
Why use a mixture of sacred Latin text and secular English text? Partly, I suppose, because I believe the boundary between the two worlds is an illusion. Walls and fences have, in my opinion, always caused conflict and I like to demolish them when I can. But I think also the choice of texts was, in itself, a parapraxis: 'a psychical conflict that prevents direct expression of one’s feelings or intentions and diverts it along indirect paths'. Otherwise known as a 'Freudian slip' ' saying one thing when intending to say another but, deep down, wanting to say what actually comes out. Or, accidentally leaving your umbrella at a friend’s house, which really means you want to go back, or never wanted to leave. In other words: a mistake, in word or deed, that reveals your true intentions.

So the piece does represent conflict—something we all face throughout our lives and which I was certainly facing at the time of composing (and is the cause of all parapraxes)—but it is also an attempt to resolve it. Perhaps the Latin text represents my heart, and the secular text my head. Or vice versa. Or perhaps, as an atheist, I am leaving my umbrella in the church.

In defining the word parapraxis, Freud said thatno human behaviour is truly accidental. Whilst I probably don’t subscribe to such a categorical view, I do sense a kernel of truth there.

The English text is not poetry, in the sense that I don’t expect it to stand alone without the music, of which it is an integral part. I shall be eternally grateful to Sigyn for giving me the opportunity to express the themes contained within it.

What first caught my interest when Kjell Mørk Karlsen introduced me to his Serenata per fagotto e archi, was the slow middle section. It sounded as though it should have been sung, preferably in a church. I became fascinated by the vocality of his instrumental composition, and by the strong sense of becoming absorbed in a piece of sacred music while I was working on this seemingly secular concerto.

Mørk Karlsen later told me that this theme in fact originally came from a liturgical vocal composition: his St. John’s Vesper for choir, string quartet and organ. He said that this is something he often does: to transpose elements and content from church music into instrumental music, and not necessarily for liturgical use. He also spoke of his strong relationship to Russian Orthodox sacred music, with its 'warm authenticity, romantic without being sentimental.' Nor does he shy away from borrowing elements in music that has meant much to him.

In this particular work he aims to 'present the great span of the bassoon, also its lyrical qualities, and to challenge the bassoon as an instrument, in the same way, and on the same level, as other instruments are challenged.' The final section, therefore, evokes the mood of Mørk Karlsen’s compositions for strings. Here you can feel the influence from Shostakovich, and the 'playful musicality' that appeals so much to him.

At the same time there is a simple, harmonic landscape, with what he calls 'stationary movement'. The inspiration for this comes from the vocal polyphony of the Renaissance, where numerous moving voices create variations over the same chords. This simplicity runs like a contemplative undercurrent throughout the composition and it has become a work, in my opinion, of great emotional force.

With elements from different periods and genres, Kjell Mørk Karlsen has created music with its own specific character. He uses his own human and musical experience to seek new understanding, and demonstrates that within a traditional framework, new forms of expression can emerge.

Stephen Frost, too, creates a synthesis of elements in his own musical and personal background. His music, with its inspiration from classical music, rock and pop music, film and folk, has attracted me since I got to know him many years ago.

His choral work Parapraxis is written in accordance with our mutual wish to make music where the human voice and the bassoon meet. He has written the text himself, a mixture ofsecular, personal poetry and Latin liturgical texts. Parapraxis was premiered in June 2003 at Bryn Church in Bærum, by Ensemble 96 and Øystein Fevang, with myself as soloist.

The Bassoon Concerto is a re-orchestration of the concerto he wrote for me several years ago. Its form is now closer to chamber music; it has fewer performers, and lends itself better to the span of expression of the bassoon.