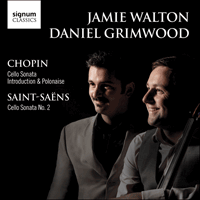 Two works from very different composers: Chopin’s works for cello were few and far between, but these two straddle his compositional life: the Introduction and Polonaise was written in 1829 when he was just 19, and the cello sonata in (1845-6) is his last work published during his lifetime (all latter works with opus numbers being published posthumously, against his wishes). In contrast, Saint-Saëns published a great many works for the cello (as well as works in almost every genre of the classical canon), with the Cello Sonata No 2 composed during his travels in Biskra, Algeria. Jamie Walton and Daniel Grimwood are performers who have proven themselves in both concert and recordings such as these to be formidable and enthralling interpreters of the classical canon.

'Jamie Walton's sound in this excellent recording is open and luminous. Daniel Grimwood is more than a match for his extravagant part: after a pleasingly bold opening Maestoso, the Scherzo explodes into life with a thrilling motoric rumble, powered by this mercurial pianist. There's plenty of Mendelssohnian magic here in both the lazily eloquent and fleet-footed variations, and an infectious sense of enjoyment' (Gramophone)
'Jamie Walton's new coupling of Saint-Saens' Second Cello Sonata and Chopin's only sonata for the instrument, restores faith in a too often maligned composer. While Walton and pianist Daniel Grimwood approach both works with an affection and scrupulousness that almost make Chopin's opening Allegro hang together, one senses Saint-Saens is their favourite' (The New Zealand Herald)» More

With the mighty Beethoven dead in 1827 and the young Schubert’s life extinguished in 1828, Vienna had lost its two great poets of the piano. The following year the city discovered and lionised a young 19-year-old from Poland who was already beginning to set down on manuscript some of the most poetic piano works of the Nineteenth Century. By the autumn of 1829, Frédéric François Chopin was already being encouraged by Beethoven’s old friend Ignaz Schuppanzigh, among others, not to return to Vienna to study as he had nothing to learn. Chopin himself was equally beguiled and bemused by the reaction of the Viennese: ‘People wonder at me, and I wonder at them for wondering at me.’

Shortly after leaving Vienna, he was invited to stay at the home of Prince Antoni Radziwill, an aristocrat, politician, patron, composer and musician for whom Beethoven composed an overture and with whom Goethe collaborated on a musical project based on his Faust. Radziwill was keen not only on the young composer-pianist’s development, but that his two daughters might also receive some valuable lessons on the piano from the young virtuoso. One of Chopin’s earliest published works, and a very rare venture into the realm of chamber music, was written during his stay at the Prince’s mansion. The composer himself writes to Titus Woyciechowski:

When I was there I wrote an Alla polacca for piano and cello. It is merely a series of brilliant effects, a salon-piece for the ladies: you see I wanted something for the Princess Wanda to learn—I was giving her lessons at the time. She is young, seventeen, pretty and God knows how pleasant it was to place her little fingers on the keys.

Chopin’s amorous intentions seem to have been, at least part, in jest to his friend as the Princess’s father would have been present in the parlour, playing the cello part in the earliest domestic performances of the work. The following year Chopin penned an introduction to the piece and it was dedicated to the cellist Joseph Merk and published as what we now know as his Introduction and Polonaise, Op 3. The composer does the work an injustice to dismiss it as tinsel for the drawing room as it is a delightful work, featuring filigree piano passages and sustained themes for the cello.

The excellent, youthful Op 8 piano trio aside, Chopin did not publish anything featuring the cello until near the end of his life. Indeed the Cello Sonata in G minor, Op 65 is his final opus number (the later opus numbers all published posthumously, against Chopin’s own wishes). Wracked by poor health and the fall-out from a complicated, exacting and dramatic situation involving his lover Georges Sand’s children, his surviving sketches from the period of composition (1845–46) unsurprisingly show that the ailing composer was toiling as never before over his work. Throughout his career, Chopin could move rapidly from composing at the piano to producing a publisher’s draft without the need to spend a great deal of time at the sketch-pad stage. The breakdown in his relationship with Sand and her family can only be part of the reason for the extra ink expended on the Cello Sonata. Its extended nature and the instrumental resources involved seem to have caused him problems striking a balance amongst the movements, and between the cello and piano themselves. Chopin describes his uncertainty and how it was resolved to his family:

Sometimes I am satisfied with my cello sonata, sometimes not. I throw it aside and then take it up again…When one is doing something it seems all right, otherwise one would not write anything. It is only later that one reflects carefully and either keeps a thing or rejects it. Time is the best form of censorship and patience the finest teacher.

Almost two years in the making, Chopin did let time do its work and the result was a masterpiece which is even now not quite as appreciated as it ought to be. The opening movement has some of the flavour of his approach in his piano sonatas, while creating space and vistas for the cello to enjoy. The second movement is a scherzo with hints of the mazurka, the slow movement wistful and poignant, while the finale delicately balances bright triplets with rather more ominous passages. The work as a whole is beautifully wrought, touching and, although on the reflective side, has a restorative refinement and grace. The British conductor and pianist, Sir Charles Hallé left an account of witnessing Chopin and his good friend, the cellist Auguste Franchomme actually perform the sonata privately:

On our arrival we found [Chopin] hardly able to move, bent like a half-opened penknife, and evidently in great pain. We entreated him to postpone the performance, but he would not hear of it; soon he sat down at the piano, and as he warmed to his work, his body gradually resumed its normal position, the spirit having mastered the flesh.

Only the last three movements of the work were ever performed in public by Chopin and Franchomme, the work’s dedicatee. The occasion was at a concert in the Salle Pleyel, Paris, in 1848, which proved to be Chopin’s final public performance.

Unlike the rarefied piano-specialist Chopin, Camille Saint-Saëns contributed a great deal of music to almost every genre in the classical canon. Not satisfied with this, he wrote poetry, penned a successful play and a number of travel books, was the first composer of real standing to provide a film score (for the 18-minute L’assassinat du duc de Guise) and took part in discussions or produced learned papers and articles on subjects as diverse as mathematics, astronomy, lepidoptery, acoustics, astronomy and the occult. Liszt proclaimed him the greatest organist in the world and one of Wagner’s acolytes thought him the finest musical mind of the day. His friend, the ever-arch Berlioz remarked of him: ‘He knows everything, but lacks inexperience’. His works for the cello add much to the repertoire of an instrument which had been provided for rather poorly by composers in the Nineteenth Century. Ranging from the intimacy of the Romance in D major through the rigor of the sonatas, to the grander statements of the concertante works, Saint-Saëns has given cellists a great deal to conjure with.

Thirty-three years after the great success of his First Cello Sonata, Saint-Saëns, whilst on his travels, settled in Biskra, Algeria to write a second for the instrument in February 1905. Accustomed to completing his scores with alacrity, the sonata appears to have caused him a little more sweat than normal, prompting him to write: ‘There, it is finally finished, the accursed sonata! Will it please or not? That is the question.’ The first performance of the Cello Sonata No 2 in F major, Op 123 was given on 7th November 1905, with the composer accompanying the cellist Joseph Hollman, at the private residence of Alphonse Blondel, director of the piano manufacturer Érard. The composer himself summed up the sonata thus:

The first movement is not an Allegro but almost an Andante—a piece with many demisemiquavers…In the Scherzo con variazioni I have not followed the trend in which the variations have about as much in common with the theme as the moon does with a pickled herring; but nonetheless they are dissimilar…The Adagio will draw tears from sensitive souls, whereas the Finale should awaken all those who were put to sleep by the other movements.

Although the work did not garner the critical and public plaudits accorded to Saint-Saëns’ earlier cello sonata, it has gradually made its way into the repertoire. And rightly so, as it is a marvellous work full of the boundless creativity and energy that only a master of the ilk of Saint-Saëns could muster as a septuagenarian.