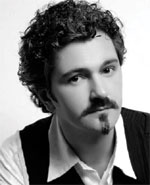 With a repertoire, which ranges from Elizabethan Virginal music to composers of the modern day, Grimwood is carving a reputation as one of the most varied and insightful musicians of his generation. Although primarily a pianist, he is frequently to be found performing on harpsichord, organ, viola or composing at his desk. Felix Aprahamian once wrote of him: ‘Probably the finest all-round musician I have ever known.’

He is a passionate champion of the early piano, and in 2009 performed Liszt’s Années de Pèlerinage at the Wigmore hall on an 1851 Erard to rapturous critical acclaim. His recording of the same was CD of the week in the Telegraph, Editors Choice in Gramophone magazine and has been unanimously praised in the press.

On being offered a scholarship to the Purcell School in 1987, he studied piano with Graham Fitch, violin/viola with Elspeth Illif and Sybil Copland and composition/counterpoint with Tim Stevenson. He later finished his pianistic training under the tutelage of Vladimir Ovchinnikov and Peter Feuchtwanger. He has subsequently enjoyed a solo career, which has taken him across the globe, performing in many of the world’s most prestigious venues and festivals. He has been the recipient of several awards but has always steered clear of competitions, believing them to be detrimental to the musical community.

A passionate Chamber musician, Grimwood’s work has always been closely associated with cellist Jamie Walton with whom he recorded the Grieg and Rachmaninov Sonatas for Signum Records. Their combined work has seen them performing a recital of Chopin at Symphony Hall, Birmingham where they shared the evening with Krystian Zimerman, as well as an appearance at the Chateauville Foundation in Virginia, USA at the personal invitation of Maestro Lorin Maazel.

His recording and performances of Liszt on an 1851 Erard have won him rapturous critical acclaim, and his acquisition of Moscheles’ 1840 Erard will enable him to explore the Romantic repertoire more fully.