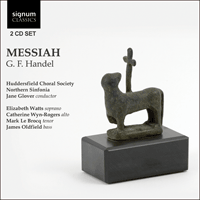 The Huddersfield Choral Society continues its esteemed relationship with Signum Records with arguably the best-loved musical work of all time Messiah, more than two and a half centuries on from its celebrated first performance in Dublin’s New Music Hall in April 1742.

'In an interview ten years ago, Jane Glover confessed she'd done Messiah some 50 times, but liked to address it always to the audience member who'd never heard it before. She does that here, delivering an unfussy and unadorned reading that gives Handel a vernacular immediacy that is profoundly appealing. It's a crowded market, inevitably, but Glover's emphasis on firm tempi and natural articulation pushes this version to the head of the queue, for newcomers and adepts alike. In that same interview, she claimed to prefer listening to playbacks on cassette in her car, to hear the performance as a whole, rather than focus on any chinks a clean album might throw up. There are flaws here, arguably, but they aren't structural: this is a rugged and utterly musical Messiah' (Choir & Organ)
'Glover's sense of drama, attention to detail and tempo relationships, and feeling for ritual nourish a persuasive interpretation, one backed by the Northern Sinfonia's stylish playing. Elizabeth Watts and Catherine Wyn-Rogers add deep emotional impact to the performance' (Classic FM)» More
'George Bernard Shaw said it should be a capital offence to perform Messiah with more than 80 musicians, and protested against the Victorians' 'attempts to make the brute force of a thousand throats do what can only be done with artistic insight and skill'. His dream has been fulfilled. Yet the old tradition lives on, though, judging by this splendid account, recorded in Huddersfield last December, it has been refined by the influence of the early-music movement. The buoyant chorus, under Glover's incisive direction, goes from strength to strength. Four vigorous soloists play their part, especially the tenor Mark Le Brocq and the soprano Elizabeth Watts, particularly fine in If God Be for Us' (The Times)

Arguably the best-loved musical work of all time, Messiah has also one of the most fascinatingly absorbing histories. Even today, more than two and a half centuries on from that celebrated first performance in Dublin’s New Music Hall in April 1742, interest in—and the zest for greater knowledge of—this wonderful work continues utterly unabated.

There are those who advocate performance by small chamber groups, others who enthuse over large scale presentations (including one recent, and memorable, broadcast conducted by the late Harry Mortimer with Dr Denis Wright’s scoring of the accompaniment for brass band). The work attracts countless renditions annually involving, in the words of the Prayer Book, ‘all sorts and conditions’ of folk, not least being the many ‘bring and sing’ events.

The business of performing Messiah in the light of contemporary musical resources available has occupied musicians and scholars ever since the work was first presented under the direction of Handel himself. There are many performances accompanied only on a keyboard (normally organ), others reflecting the contrasts envisaged at some of Handel’s own performances when he designated portions of the orchestral accompaniment to be given by a smaller group of players (senza ripieno) rather than the full provision. Many modern presentations make proper use of the keyboard continuo to provide harmonic completion of the texture exactly as in Handel’s own time—others might use an arrangement of the accompaniments for recitatives for instruments other than keyboard.

Early on in the work’s history, no less a composer than Mozart tackled the difficulty of providing an accompaniment which filled out the music in very much the same way as the continuo part allotted to the discerning organist or harpsichordist of today. His ‘version’ was devised for the salon rather than the church or concert hall. Messiah is by no means the only Handel choral essay to have received the ‘Mozart treatment’; there exist similar versions of Acis and Galatea, the Ode for St Cecilia’s Day and Alexander’s Feast. All were produced for the musical performances promoted in late 18th century Vienna by Baron van Swieten. Mozart’s Messiah accompaniments have proved far more durable than his other treatments, and were incorporated within the first scholarly edition of the work (by Professor Ebenezer Prout) published in 1902.

Others besides Prout, Shaw and Bartlett have left their mark on contemporary understanding of the complex history of Messiah. It was London Choral Society conductor John Tobin who prepared the authoritative text for the Bärenreiter Handel Edition (NHA), whilst the efforts of the BBC’s Basil Lam can be heard in the famous late 1960s recording by the late Sir Charles Mackerras (as well as in numerous broadcast transmissions). Mackerras’ stylish performance was distinguished by being the first such to be recorded deploying a male alto (the young Paul Esswood) in addition to a contralto. Besides countertenors and falsettists, Handel himself also made use of boy trebles for certain numbers. Of the music itself, very little need be said, so well-known and greatly loved are the individual component movements and the work as a whole. Suffice it to say that it is often the simplicity and deep pathos inherent in Handel’s vocal lines that makes the greatest effect; indeed, it can be asserted that Handel’s intensely personal response to the rhetoric inherent in the words is the most significant single factor in this glorious work.

We do well, perhaps, to remember the assessments of Handel attributed to later geniuses:

“He was the greatest composer that ever lived. I would uncover my head and kneel before his tomb,” declared Beethoven; whilst Haydn, after hearing Messiah for the first time, reportedly declared of Handel, “He was the master of us all.”

And yet, Messiah is by far the least typical of Handel’s many oratorios. This is due in the main to the special genius of his librettist Charles Jennens, who was responsible for the imaginative compilation of the verbal text—a compilation which has, in itself, probably done almost as much to establish the work in the hearts and minds of successive generations as Handel’s music. Messiah, truly, stands in a class of its own—as much almost a liturgical observance as a concert piece; not in the manner of the Passion oratorios from the Lutheran tradition, but more as a series of scenarios and reflective tableaux. Sir Malcolm Sargent’s famous remark on the role of the conductor springs to mind. He maintained that narrative Passions were the musical equivalent of a motion picture, with Messiah as more a series of magic lantern slides—his thesis being that anyone, given sufficient technical background, could load a cinema reel and switch on, but that it took real judgement and timing to control the progress of magic lantern slides.

Bringing us back to Handel’s own performances, it is of interest to recall the assessment of a French poetess:

The Oratorio, or pious concert, pleases us highly. English words are sung by Italian performers, and accompanied by a variety of instruments. HANDEL is the soul of it: When he makes his appearance, two wax lights are carried before him, which are laid upon his organ. Amidst a loud clapping of hands he seats himself, and the whole band of music strikes up at exactly the right moment. At the interludes he plays concertos of his own composition, either alone or accompanied by the orchestra. These are equally admirable for the harmony and the execution. The Italian opera, in three acts, gives us much less pleasure.

Handel was engaged extensively in the composition and presentation of oratorio in London for the last two decades of his life. His business sense and entrepreneurial energy seems to have captured the mood of the age. Had he remained stubbornly committed to opera composition, his twilight years would have been much less comfortable and his public far less appreciative. The composer’s curt comment to a member of the nobility is especially revealing of his own attitude to oratorio. On receiving the compliment of having provided his audience with a ‘noble entertainment’ Handel is alleged to have replied: “I should be sorry if I only entertained them. I had wished to make them better…”

The work’s first performance was presented by the combined choirs of the Dublin Cathedrals (Christ Church and St Patrick’s) under the composer’s direction. Originally scheduled for the 12th April 1742, the performance was subsequently postponed for a day ‘at the desire of several persons of distinction’ as the news reports have it.

Press interest in the premiere was intense—almost at fever pitch—and the gloriously quaint announcement on the day of the concert in Faulkner’s Dublin Journal for 13 April has often been quoted:

The Stewards of the Charitable Musical Society request the favour of the Ladies not to come with Hoops this Day to the Musick-Hall in Fishamble Street: The Gentlemen are desired to come without their Swords. This Day will be performed Mr Handel’s new Grand Sacred Oratorio, called THE MESSIAH…

The solos in the first performance were taken by the professional lay clerks from the Cathedral Choirs. It is probable that Signora Avoglio and Mrs Maclaine provided the soprano allocation with Mrs Cibber joining two countertenors in the alto provision. Several numbers were repeated upon continuous applause, and Mrs Cibber’s rendition of Handel’s pathos-ridden and wonderfully expressive setting of He was despised was such that the Revd Dr Delany was reported to have leapt from his seat, shouting ‘Woman, for this thy sins be forgiven thee!’.