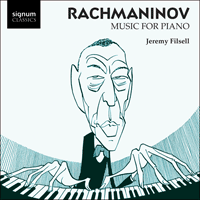 Jeremy Filsell is one of very few performers to have established a virtuoso concert career as both a pianist and organist on the international stage. This recital album explores Filsell's lifelong love of Rachmaninov's piano music, surveying selections from preludes and sonatas as well as two song transcriptions.

'Jeremy Filsell confesses that through featuring repertory that has remained in his consciousness ever since he 'could first reach the piano's keys and pedals simultaneously' this recording represents 'the sum of a personal musical journey'. Such close identification with what he terms 'Rachmaninov's inexhaustible variety of expression' is strongly reflected in his well-chosen and warmly recorded programme which inevitably includes many familiar favourites' (BBC Music Magazine)» More
'In many ways, the readings are eloquently persuasive. He's certainly got the measure of Rachmaninoffs dark colors (try the sonata's glowering middle movement), and his handling of texture is often beguiling' (Fanfare, USA)» More

The surfeit of Rachmaninov’s piano music in the recording catalogue nowadays testifies to the enduring allure of his music for pianists since his death nearly seventy years ago. As its appeal has marked my own pianistic journey, this recording reflects my personal enthralment with it over a thirty-year period. Its attraction for me began with a treasured leather hardbound copy of the Preludes that I inherited from my maternal grandfather. To my regret, I never knew him—he died a few months before my birth—for in his day, he enjoyed a reputation as a pianist, organist and conductor in the black country region of England and accompanied many singers of that time (including Heddle Nash and the young Kathleen Ferrier).

His music library included all the standard keyboard repertoire of Bach, Beethoven, Chopin, Schubert, Schumann, Brahms and Rachmaninov, a musical treasure-trove that, after his death, became my parents’ property. Thus, this collection came to illuminate my own youthful, burgeoning appetite for music per se. As a pianistic novice I ‘played’ all of it, well before I could comprehend any of its aesthetic or technical substance or indeed grant it any kind of artistic justice.

I remember vividly the hard-bound edition of Rachmaninov's Preludes, which seemed to provoke a greater fascination in me above other music. Was this because of its expensive-looking and unique dark blue leather cover, I wonder? It urged special handling, for sure, and I suspect that youthful innocence made the natural extension to assume that the music it contained therein was also special. I was not mistaken, of course, and I recall being struck by the elegance of the way this music looked on the page and being enticed by the intricacy of its contrapuntal detail—not that I was able to articulate such things at a tender age.

Beyond this, my parents’ LP collection included a recording of the Preludes played by Moura Lympany and their outsize sleeves remain indelibly imprinted on my memory, as much for the rather stiff, but perhaps now iconic, black and white images of Lympany that adorned the front cover, as for the performances themselves. Nonetheless, listening to Rachmaninov’s music on the ancient record player and trying to follow the music, I do recall how vivid and sophisticated this music’s detail seemed to be. Inevitably I desperately wanted to play it and I recall trying to pick out lines of the Eb Prelude Op 23 No 6, attempting—unsuccessfully—to mimic the sweep and energy of Lympany’s performances. Thus, this present recording is the sum of a personal musical journey and whilst the programme is something of a pot-pourri, it represents not only much of the music that has remained, leitmotif-like, in my musical consciousness since I could first reach the piano’s keys and the pedals simultaneously, but, en route, the inexhaustible variety of Rachmaninov’s expression.

Whilst the Preludes here represent an earlier part of my own path (and the famous C# minor represents Rachmaninov’s—a piece which plagued him wherever he went), the second Sonata I learnt as a college student. There are many who advocate the authenticity of and preference for Rachmaninov’s initial version (1913), yet I have always been drawn by the revisions (1931), symbolising as they do, the leaner and perhaps more condensed style of his later writing. Rachmaninov has rarely been thought of specifically as a rhythmicien, but the detailed rhythmic organisation of his scores is a remarkable feature, an approach embodied both in his own precise playing style (where a compelling rhythmic drive was allied to a natural melodic elegance) and in his later aesthetic draw to a more neo-classical sensibility (exemplified by the textural and episodic clarity found in the Paganini and Corelli Variations, the 3rd Symphony and in his last but perhaps most brilliant flowering of orchestral expression, the Symphonic Dances Op 45). In performance itself,Rachmaninov was also not averse to the odd moment of—entirely admissible—textual license and those familiar with his recording will spot the impenitent reference to it here in the cadential peroration in the G minor Prelude Op 23 No 5.

One of the Song transcriptions derives from my own friendship with and admiration for the British composer and pianist Francis Pott, a musician whose creativity, artistry and scholarship has proved a continual musical inspiration to me over many years. His understanding and knowledge of all things pianistic is second to none and his engagement with the music of Rachmaninov in particular motivated this ‘free’ transcription. At times, it appears to surpass the original in gestural extravagance and textural complexity—presenting a significant expansion of, and often harmonic digression from, Rachmaninov’s Song—and is more representative of paraphrase than transcription.

Beyond the more obvious and superficial technical demands, however, it reflects the intensity of Pott’s creative mind, his absorption of Rachmaninov’s textural implications and the predilection for distributing melodic strands across differing voices.