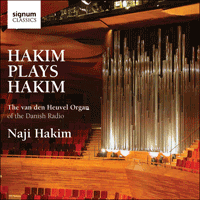 The van den Heuvel Organ of the Danish Radio

As both an organist and a composer, Lebanese-born Naji Hakim has distinguished himself as one of the most active artists of his generation. A virtuosic performer, who succeeded Olivier Messiaen as organist at l'église de la Trinité in Paris, many of his works draw on his own Christian beliefs (in 2007 he was honoured with a Papal award for his services to the church). The works are recorded on the new van den Heuvel organ of the Danish Radio Concert Hall, Copenhagen (opened in 2009)

'Hakim's spiritual exuberance is expressed in harmonically ear-tickling music which sings and dances, accelerating, in his inimitably breathless toccatas, to the insane-sounding speeds of whirling dervishes' (Choir & Organ)» More

Singers and dancers alike say:
All my fountains are in you.
Dansende synger de:
Alle mine kilder er i dig.
(Psalm 87:7 / Salme 87:7)

All my founts shall be with you is a Danish hymn by Nikolaj Frederik Severin Grundtvig (1783-1872), one of the most outstanding Danish theologians. He has left his stamp on Danish culture with his wide-ranging works, as priest, hymn writer, author, statesman, historian, Nordic philologist and educator. Grundtvig wrote roughly 1500 hymns, and about one third of the hymns in The Danish Hymn Book (2002) were written or re-created by him.

The hymn refers to God’s channel to us through baptism. All my founts shall be with you is God’s living word to his people forever: to Israel, to Jesus, to the church, to the baptized and the communicants. All my founts shall be with you is God’s promise that life streaming from him wells forth over us for all time. The fount of life flows over us in baptism and bestows on us the Holy Spirit, the forgiveness of sins and life eternal. That eternal life begins in baptism and is a foretaste of a new heaven and a new earth at the end of time.
Pastor Hanne Margrethe Tougaard © 2010

Naji Hakim’s piece All my founts shall be with you is based on Thomas Laub’s melody for Grundtvig’s hymn Alle mine kilder skal være hos dig and consists of 10 symphonic variations:

1. Ouverture – Animé: Initial variation evoking the unfailing sources and the unquenchable gush of the Spirit. The same type of figuration is found in the other variations in perpetuum mobile, in scales or arpeggios.
2. Hymne: The melody is presented in an expressive harmonic texture on the foundations stops.
3. Résolu: Perpetuum mobile envelops or enhances the cantus.
4. Nocturne: Impressionistic and mysterious variation. Here the melody is veiled in ornamental lines—the Très majesteux recalls the first section of the hymn with an ascending ornamental line from the bass to the extreme treble, to represent the passing of the spirit into Eternal Life.
5. Gracieux – Expressif – Aimable – Dansant – Expressif – Aimable – Expressif – Gracieux: Central variation, theatrical and naive, playing on the alternation of moods.
6. Avec feu: A perpetuum mobile recalls the third variation.
7. Nocturne: Expressive ornamentation of the melody in the rhythmic style of a sicilienne.
8. Rythmé: Exuberant and vivacious.
9. Modéré: Descending scales symbolize the abundance of the gifts of the Spirit.
10. Héroïque – Résolu – Un peu plus vif – Très vif: Final variation articulated in four increasingly rapid sections and recalling the melody of the psalm in exaltation.

Fight is necessary if life shall grow,
not fight but for daily bread,
but fight for freedom in life and faith—
for eternal standstill is death!
Hans Vilhelm Kaalund (1818-1885)

I love the colourful world is my response to a commission from the organ-builder, Hans-Georg Vleugels, who asked for a piece featuring ‘a musical journey from Beirut, through Istanbul and Paris, and finally into Hardheim!’. While considering this idea with great interest—an idea which recalled my own history being Lebanese by birth, living in Paris and travelling all over the world—I was introduced by my friend, Pastor Hanne Margrethe Tougaard, to the Danish folk song entitled Jeg elsker den brogede verden (Text: Hans Vilhelm Kaalund, 1877; Melody: Thorvald Aagaard, 1922; ‘Ich liebe die farbenreiche Welt’, ‘I love the colourful world’). Both the melody of this song and its text became my source of inspiration for the composition. It consists of two movements: a Praeludium developing a free ornamentation of the melody in a poetic and expressive mood on the flutes and voix céleste, and a rhythmical, powerful and joyful Tanz-Toccata. Besides the fact that this work pays tribute to the colourful organ cases and sounds of Vleugel’s organs, it philosophically punctuates the evolution of my music; rooted in my faith, dedicated to the Glory of God and the Joy of mankind, and inspired by several cultural, religious and ethnic sources.

At the initiative of Pastor Hanne Margrethe Tougaard and of organist Flemming Chr. Hansen, the Sakskøbing Church, Denmark, released a CD of Danish hymns in September 2004 titled ‘Salmer til tiden—en musikalsk velkomst til den nye salmebog’ (Hymns for our time—a musical introduction to the new hymn book).

The Sakskøbing Præludier of Naji Hakim are based on some of these chorals, coming within the framework of an ecumenical approach and to pay a grateful homage to the Sakskøbing parish, to its organist and to its pastor. The work has been written in two versions: one version for Organ and another version for Chamber Ensemble (flute, clarinet, bassoon, harp, violin, viola and cello).

The Preludes can be distinguished by characters full of contrasts, which accompany the poetic line of the texts of the hymns, the theological axis that underlies them and the liturgical time. They find their place as much in the liturgy as they do in the concert.

Mit hjerte altid vanker develops a dancing movement around the choral of Carl Nielsen. Chimes, melisms, aksak rhythms (3+2+2) or toccata give the dominant colour of the cycle, emerging from the joy of Christmas. Expressive harmonies accompany the declamation of the tenor of Nærmere, Gud, til dig. In O Gud, du ved og kender the cantus is counterpointed by a perpetual movement, an image of the confident Christian, carried by a compelling stream in the steps of Christ. At sige verden ret farvel is an expressive, harmonic meditation full of chromaticism, facing the torments of death and the mystery of Redemption. Hil dig, Frelser og Forsoner illustrates the loving and grateful thrust of the Christian soul towards the Crucified, Saviour and Consoler. One may figure in the perpetuum mobile of the middle section, a picture of the Eternal Joy in Christ. A relief of serenity and of light frame the majestic declamation of the tenor of Den mørke nat forgangen er. Based on a Swedish popular melody, Nu blomstertiden kommer offers a cheerful and dancing thanksgiving, in praise to the Creator. The Easter choral par excellence in Denmark, Påskeblomst is paraphrased harmonically here, with an ascending cadential progression and a crescendo culminating on the splendour of the Resurrection. The overflowing joy of Op, al den ting, som Gud har gjort takes up again the character of the initial movement of the cycle and falls within the thrust of Psalm 150: ‘Let all that breathes praise the Lord’. The peaceful paraphrase of O kristelighed, conjugates the ABA form to the ornamental variation. The light writing of Så vældigt det mødte os først i vor dåb symbolises the baptismal water and the encounter with the Beloved. Befal du dine veje concludes the cycle in a popular and festive character, exuberant with joy.

This piece is based on a Danish song Vil du danse med mig? (Will you dance with me?), by the author and composer Hanne Kurup. It consists of a set of 10 very contrasted variations: Theme, Cantabile, Valse, Deciso, Arabesque, Burletta, Tango, Scherzando, Berceuse and Finale. The title To call my true love to my dance is quoted from a Christmas carol: Tomorrow shall be my dancing day. The melody of Vil du danse med mig? is used with kind permission of Hanne Kurup.

Now the God of peace, who brought back from the dead our Lord Jesus, that great Shepherd of the sheep, through the blood of the everlasting covenant, make you perfect in every good work to do His will, working in you that which is well pleasing in His sight, through Jesus Christ, to whom be glory for ever and ever. Amen. (Hebrews 13, 20-21)

In the same way that the pastor has a mission to gather the community, and go out, like the Good Shepherd, to find the sheep that has gone astray, the bell has a mission to summon the faithful to the common assembly, to reach out for the farthest ones, to wake up the dozing ones and stimulate the indifferent. This suite is based on the Glenalmond chime. The music here applies the Christian symbolism of the bells to biblical quotations referring to the Good Shepherd. The opening movement, Strømmende (Streaming), develops the chime melody in a cantabile style, with a lively coda. In the second movement, Favnende (Embracing), the theme is articulated with ostinato figures and dark harmonic colour. The middle section, scherzando, prepares a clear diatonic recapitulation. Smilende (Smiling) is characterized by its light texture and registration (flutes 4 and manuals alone). Jublende (Jubilating) is a more developed movement combining rondo-sonata and variation forms.

1. Strømmende (Streaming)
‘The Lord is my shepherd; I shall not want. He maketh me to lie down in green pastures; He leadeth me beside the still waters.’ (Psalm 23, 1-2)
2. Favnende (Embracing)
‘If a man have a hundred sheep and one of them be gone astray, doth he not leave the ninety and nine, and goeth into the mountains and seeketh that which is gone astray? And if it so be that he find it, verily I say unto you, he rejoiceth more over that sheep than over the ninety and nine which went not astray.’ (Mat. 18, 12-13)
3. Smilende (Smiling)
‘Thou anointest my head with oil; my cup runneth over.’ (Psalm 23, 5)
4. Jublende (Jubilating)
‘Surely goodness and mercy shall follow me all the days of my life; and I will dwell in the house of the Lord for ever.’ (Psalm 23, 6)

Aalaiki’ssalaam ‘Variations on a lebanese theme: Peace be with you.’
To Dr Franz Hauk, Organist of Liebfrauenkirche, Ingolstadt.

This work is inspired by the tragic events that occurred in the Middle East and particularly in Lebanon in summer 2006, and aims to be a testimony of Peace and Joy. It follows the theological and musical line of another work of the composer, Die Taube and echoes Pastor Hanne Margrethe Tougaard’s preface for this same work: Lad Guds melodi klinge i jer og lede jeres fødder ind på fredens vej (Let God’s melody resound in you and guide your feet into the way of peace).

Alaiki’ssalaam (Peace be with you) is a Marian Maronite melody developed here in a set of seven variations. The first variation is a joyful melismatic ornamentation in contrasted modes. Variations two and three proceed by rhythmic ostinato or aksak rhythm (3+3+2) around harmonic frames of the theme; they are linked to a powerful and dark Marcia (Variation four). An expressive harmonisation in the middle of the work (Variation five) is followed by a joyful arpeggio. Variation seven is articulated in three sections progressing from an initial habanera, through a tonal, rhythmic and dynamic gradation, to burst out in the brilliant and cheerful coda.

The programme on this recording prolongs the theological trajectory of my earlier works with a special focus on Danish and Lebanese melodic or poetic sources. The orchestral characteristics of the van den Heuvel organ of the Danish Radio concert hall offers a large spectrum of dynamics and colours to serve the singing, dancing, peaceful or fiery rhythmic drive of the music.