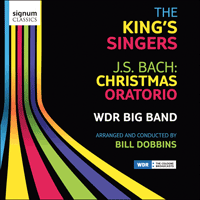 A unique album from two versatile and distinctive groups of performers: The King’s Singers and the WDR Big Band perform a new jazz version of J.S. Bach’s Christmas Oratorio, arranged and directed by Bill Dobbins.

Recorded live in concert, this performance captures the timeless and versatile nature of Bach’s work, retaining the integrity of the original whilst presenting it in wholly new setting. Both groups are Grammy award winners; The King’s Singers, famed for their precision and sound, and the WDR Big Band, one of Europe’s leading jazz-ensembles.

When Lucas Schmid, producer of the WDR Big Band, first mentioned his interest in a program of music from the Christmas Oratorio of J.S. Bach, arranged to feature this ensemble in combination with the King’s Singers, I was immediately interested and excited. Having collaborated several times with this group of uniquely gifted vocalists, including the WDR Big Band’s Bach 2000 project, I knew there was an opportunity to create something very special indeed. Bach composed the work between 1734 and 1735. Since each of the six cantatas that make up the Christmas Oratorio was originally intended for a particular Sunday in the liturgical year, the sheer quantity of music is far too much for a single performance. The first major part of my work, then, would be the musical selection.

The practice of translating selected pieces from the classical music repertoire into a jazz or jazz related idiom has always seemed to me to be a natural and especially fruitful one, since the best music in both traditions shares the same powerful creative elements at its core. The musical language of chromatic tonality that blossomed during the time of Bach, and continued to play a central role in western music through the first half of the twentieth century, is essentially the same language used by mainstream jazz musicians from the inception of that music up to the present time. The primary additional elements in jazz are those coming from the potent tradition of blues music and its related genres, the rhythmic element of swing, and the personal sounds and expressive devices through which jazz musicians have greatly expanded the ranges and variety of sounds produced on western musical instruments. And the element of improvisation, a vital ingredient in any jazz performance, was also an indispensable skill for the musicians of Bach’s time, in which music was an inclusive and holistic discipline, as it largely remains in jazz today.

Many young jazz musicians and even more jazz students are unaware that most of their harmonic vocabulary, and much of their thematic material as well, was developed by European composers, and Bach was already working with much of this at the highest level of artistic expression in the early 1700s. On the other hand, many classical musicians and even more classical music students are unaware that it is primarily jazz musicians who continue to creatively use and maintain the unique language of chromatic tonality from which all the works of their standard repertoire were composed. In fact, I am convinced that if Bach were alive today, he would certainly be involved in jazz, since jazz is the music of our time that combines a richly evocative chromatic musical language with the creative discipline of improvisation in a myriad of instrumental and vocal combinations from solo performers to chamber ensembles and large orchestras. Jazz also maintains a connection to folk and popular music, and is rooted in a strong rhythmic idiom that has often been connected to social dancing. Of course, Bach used folk music, chant themes and hymn tunes as melodic sources, and his music also has a powerful rhythmic aspect, which was sometimes related to dance rhythms of the day.

There are those who may question the translation of sacred music into idioms that have elements in common with popular music. Although I certainly have no such objections, it is worth pointing out that much of the musical content in the Christmas Oratorio was adapted from Bach’s secular works, combined with a new text. These parody techniques were of great use to such a prolific composer. Since much of Bach’s secular music was composed for singular events, such as a king’s name day or a prince’s birthday, the adaptation of particularly memorable pieces for church music enabled these works to have a longer performance life and to be heard by a wider audience. It is interesting to note here, that many people had objections when gospel musicians such as Thomas Dorsey began to set the texts of old hymns and sacred songs to music that came from blues and African-American folk and popular traditions, and then brought this music into the church. For many church going black Americans of the 1920s and 1930s, jazz and the blues were the devil’s music. One of Thomas Dorsey’s most successful arguments to some of these hardnosed critics was, “Why should we leave some of the best music to the devil?”

It is clear enough to me, that the music of Bach is so strongly communicative that it can easily stand some rhythmic transformation and a tasteful degree of harmonic enrichment without losing its essential meaning. There are even rhythmic elements in the original version that clearly suggest specific Latin or jazz rhythmic genres, as a comparison of the original piano vocal score of the oratorio with the arrangements presented here will clearly demonstrate. There are also modal colours in some of the melodies that suggest jazz related idioms. At the end of the vocal sections of the chorus number, Ruler of Heaven (Herrscher des Himmels), the sonorities in the original music suggest blues. Likewise, in the subsequent chorus number, Fall with praises and thanksgiving (Fallt mit danken, fallt mit Loben), the gospel vamp that starts the improvised trombone solo was clearly suggested in the rising and falling harmonies of the opening thematic section of the piece. The masterful counterpoint in the tenor aria, I only live to give thee worship (Ich will nor dir zu Ehren leben), demanded a basic swing approach in order to maintain the clarity of the independent melodic lines. There is imaginative use of both syncopation and chromaticism in many sections of the original version that is centuries ahead of its time. One of the best examples is the soprano aria, But a gesture from his hands (Nur ein Wink von seinen Händen). My use of an unusual Latin rhythm in triple meter simply brings added emphasis to these beautiful aspects of the music.

Perhaps the most impressive characteristic of Bach’s music is its ability to speak to and to nourish the whole person. It is easy enough to find examples of music in today’s world that are primarily intellectual, emotional or physical. In fact, most music we hear tends to appeal primarily to one side of our experience. But the greatest music, of whatever historic period, has food for the intellect, the emotions, and the body. There is no music that exemplifies this ideal of completeness and balance better than the music of Bach. And any music that can rightly be referred to as timeless embodies this ideal.

My aim in arranging this program of music from Bach’s Christmas Oratorio for the WDR Big Band and the King’s Singers was threefold. First, I wanted to select chorus numbers, arias and chorales that represent the musical diversity and imagination to be found in the six cantatas that comprise the entire work, while also retaining the recitatives of the Evangelist, which convey the Christmas story as presented in the Gospels. Next, I wanted to translate the musical content and dramatic character of the original into the more contemporary idioms of American jazz and Latin music, while remaining true to the spirit of Bach’s original material. Finally, I wanted to arrange and orchestrate the selections in a manner that features the extraordinary talents of both the WDR Big Band and the King’s Singers to best advantage.

There are moments in the programme where the big band roars in its customary fashion, but others when the woodwinds and flugelhorns create a more restrained and subtle orchestral sound. The individual sections of the band are featured as well as the full ensemble, and the wealth of individual solo talent also plays a central role in developing the moods of the larger pieces in a personal and spontaneous manner. Of course, the King’s Singers are the featured “soloist” in my personal vision of this creative masterpiece. Just as the WDR Big Band is one of the world’s premiere jazz orchestras in terms of both virtuosity and musical versatility, it would be hard to imagine a vocal group better equipped than the King’s Singers to bring a fresh perspective to this musical treasure from the early eighteenth century. They are truly one of a kind, and this collaboration is especially enjoyable when the material we are working with is of such high caliber. Each of the individual singers has featured selections here, but their remarkable qualities as an ensemble are the focal point of much of the work. In addition to the two unaccompanied chorales, there are numerous moments within the larger pieces where there is little or no accompaniment, and their command of exquisite subtlety and expressive nuance can be fully appreciated. At other times they have the opportunity to sing full force with the support and encouragement of a powerful and driving big band. The abundance of musical skills and creative potential involved in the entire team here is truly an arranger’s dream.

I would like to thank Lucas Schmid and the WDR in Cologne for providing the opportunity for such a special program to be created. I sincerely hope that you all enjoy listening to this music as much as we enjoyed making it.