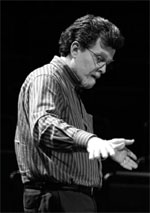 Bill Dobbins is professor of jazz studies at the Eastman School of Music in Rochester, New York, where he teaches courses in jazz arranging and composing, jazz pedagogy and history, and directs the award winning Eastman Jazz Ensemble and Eastman Studio Orchestra. From 1994 through 2002 he was principal conductor of the WDR Big Band in Cologne, Germany. He continues working there as guest conductor, as well as with the Metropole Orchestra in Hilversum, Holland.

Mr. Dobbins also has a background as a classical pianist, having performed with orchestras and ensembles under the direction of Louis Lane, Pierre Boulez, Lukas Foss and Frederick Fennell. He was a prizewinner in the 1972 Gaudeamus International Competition for Interpreters of Contemporary Music in Rotterdam. As a jazz pianist, composer, arranger and conductor, he has collaborated with such well known artists as Clark Terry, James Moody, Chuck Israels, Red Mitchell, Phil Woods, Al Cohn, Eddie Daniels, Dave Liebman, Kevin Mahogany, Peter Erskine, Gary Foster and the Kings Singers. He is also active in jazz workshops in music schools and conservatories throughout the world. In addition to his long association with the Eastman School, he headed the jazz studies department at the Hochschule für Musik in Cologne from 1998 to 2002.