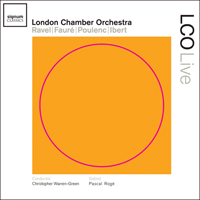 The LCO return to disc on Signum with a new programme of French orchestral works by Ravel, Fauré, Poulenc and Ibert. Their ‘LCO Live’ series captures the vibrant, exciting performances they give at their London home of St. John’s, Smith Square. Singled out as one of the capital’s (and the nation’s) leading ensembles, the LCO and their Music Director Christopher Warren-Green performed for the wedding service of TRHs The Duke and Duchess of Cambridge earlier this year.

Ravel Le Tombeau de Couperin
Composers do not, in general, make good soldiers. The practice and theory of one seems inimical to the other: something to do, perhaps, with obeying orders and submitting to the yoke of teamwork rather than the draw of solitary invention and endeavour; also and more debatably to the heightened sensitivity of the artistic temperament that renders it unsuited to the gore and horror of the battlefield. It’s an anomaly of history that, for half a century (roughly 1895-1945), pushed composers and other sensitive souls into the arena of war, when technology had not matched the reach of geopolitical conflict. The music composed with slaughter fresh in the mind’s eye and ear, therefore, may also have anomalous qualities.

Ravel was exempted from conscription on health grounds, but he was desperate to serve his country in the Great War. In March 1916—at the age of 40—he chose to serve at the Front as a truck and ambulance driver. In September 1916 he became ill with dysentery and in January 1917 while he was recuperating in Paris his mother died suddenly. In November that year he completed a suite for piano, and dedicated each of the six movements to the memory of a friend lost in battle. The suite was first performed in April 1919, and three months later he re-composed four of the six movements for chamber orchestra.

It was never Ravel’s way, though, to wear the scars of grief and depression on the sleeve of his music. Instead they are sublimated within antique forms: the Baroque dance suite, and the idea of a musical Tombeau, or memorial, with which French composers had remembered their friends, teachers and heroes for four centuries and more. Ravel did not presume to trespass on the music of François Couperin (1688-1733), but chose instead to honour the spirit, the clarity and the grace of his work in a personal tribute, inevitably coloured by nationalist sentiment, of surpassing gentleness and delicacy. This character and the exquisite avoidance of irony in its revival of old and formal dance rhythms, make the suite diametrically opposed to Ravel’s other ‘war’ work, the opulent and savage parody of waltz form, La valse. Only at the unlikely yet powerful climax of the Minuet are we directly confronted with the scale of what is lost; whereas the bluesy sign-off, equally unlikely and imaginative in its way, more typically wears the suite’s overall demeanour of a sad smile.

Fauré Pavane Op 50
Forget (if you had remembered them) S Club 7 and World Cup ’98. Think instead of a high- Renaissance palazzo, the origin of the Pavane as a courtly dance with four beats in the bar: or of a private chamber in an Elizabethan house, appointed with recorder and lutenist. John Dowland, Thomas Morley and many others wrote Pavanes for this mise-en-scène: Morley described the Pavane as ‘a kind of staid music, ordained for grave dancing’.

So it is in Fauré’s ‘translation’ of the dance to late-nineteenth-century Paris. The flute, modern cousin to the recorder, sings the doleful main theme; you can even hear the archaic lute in the gentle, plucked bass of the accompaniment. After the theme has passed from the winds to the strings, there is a short middle section, more impassioned but still in the modal, detached style of the whole, before the theme returns.

Poulenc Piano Concerto
In November 1948 Poulenc made his first tour of the USA with his confidant, the baritone Pierre Bernac. On it he played a commission, the last of his sparkling keyboard concertos, for piano. He had in fact composed for solo piano and orchestra 20 years before, with a ballet, Aubade, that epitomises the irreverent, obstreperous, to-hell-with-it spirit of 1920s Paris. The concerto often revisits that music and those times, sometimes coloured with a rosy, Russian romanticism that is then all the more rudely banished by the many deliberate discontinuities. It was around this time that a friend coined the phrase that Poulenc never quite lived down, ‘half monk, half thug’.

Neither was true of his sociable personality, but his music tends to the extremes that he was otherwise reluctant to discuss. His next work, for example, was the Stabat Mater, and in describing the startling leap of style from one to the other to a friend, he wrote that ‘I am as sincere in my faith, without any messianic screamings, as I am in my Parisian sexuality … My musical tone is spontaneous, and in any case, I think truly personal.’ As with the music of Ibert, so Poulenc at his most capricious either repels those allergic to its short attention spans, or attracts others who find relief in music that doesn’t take itself too seriously.

The plaintive, singing subject of the first movement is subject to various treatments, some of them more dignified than others, though the procession from song to march to keyboard lionism to voluptuous romanticism may remind you of Rachmaninov’s Paganini Rhapsody, and the theme itself is not unlike one from the same composer’s Third Piano Concerto.

As though Poulenc had tired of the theme, however, the orchestra skitters away with a neoclassical Minuet, itself succeeded before too long by another romantic melody, horns to the fore. At the centre of the movement is an aspiring sigh on the strings, a tiny prequel to his greatest work, the opera Dialogues of the Carmelites. It ushers in a slow section, serene and contemplative, even liturgical with its block chords. When Poulenc is in this mood, however, nothing can last for long, and the wild parade continues.

The second-movement Andante begins with the rhythm of a heartbeat. The finale is in the popular Nogent-style which Poulenc had made his own 30 years previously. The piano collaborates with the orchestra, rather than playing an adversarial role as the organ does in its concerto. Le Figaro probably got it right: ‘Certainly it isn’t a concerto at all but a little picture of manners, done up by a minor master.’

Rachmaninov returns with the gentle theme of the slow movement and its heartbeat accompaniment, though the subsequent development naturally scorns any heady eruptions of emotion: when it came to Russian music, Poulenc (and his French contemporaries) held the ‘objective’ coolness of Stravinsky as a model of restraint. Instead, a quicker central section dispels the tension and gives an unlikely context to the soloist’s grandiose fulmination. The finale is perhaps the most typical of Poulenc, with its majorminor scamper, its Mozartian good humour in instrumental conversation and diffident send-off.

Ravel Pavane pour une infante défunte
The violinist Pablo de Sarasate encouraged one creative strain of enthusiasm for Spanish culture among French composers, that paid homage to popular or folk tradition. Born in the Basque country, Ravel was ideally placed to make his own contribution to what was becoming an increasingly fertile crosspollination of Romance cultures. L’Heure Espagnole (1907—9), that most perfect of comic operas, is one hilarious entanglement of sensuality and manners; the instrumental Rapsodie Espagnole (1907—8) brings darker harmonies to the opera’s swing and sexiness, and in turn this affecting little Pavane ‘for a dead Infanta’, or child princess, shares some of the Rapsodie’s wistfulness, but in the more reserved context of the aristocratic dance-form.

Ravel wrote the Pavane for piano back in 1899, while still a member of the composition class at the Paris Conservatoire. He didn’t have any particular deceased princess in mind, but he dedicated the Pavane to a living one, his benefactor the Princesse de Polignac. When he came to orchestrate it 11 years later, Ravel had behind him the experience of writing the two ‘Spanish’ works above and much else besides for larger forces, and no Ravel ‘orchestration’ simply transfers the notes from one instrument to another: in the process, the original work is always refined and tinted. The famous melody would be perfectly at home on the flute, most French of instrumental voices, but it gains additional distance and poignancy on a pair of muted horns.

Ibert Divertissement
You need only glance at the orchestra to see that the Divertissement began life in the theatre pit, as incidental music. With solo winds and brass and a varied and busy percussion section, the band is calculated to conjure a bright instrumental palette in tints and splashes of light, Mediterranean colour; perfect for a French farce about an Italian Straw Hat. The hat in question is eaten by a horse that is meant to deliver a groom to his wedding. Delays and chaos inevitably, delightfully ensue. After the opening carnival of scales (very Saint-Saëns) comes a funeral march—or is it an abortive wedding march? Mendelssohn keeps poking his head around the door, and the reference to the sublime madness of A Midsummer Night’s Dream is only too appropriate. But the following Nocturne is entirely French in character—you can almost see Belmondo and rings of cigarette smoke through the light string haze.

The wedding party returns to dance a waltz. When the most famous of them all appears, who knows whether it’s in nosethumbing parody or affectionate homage? Erik Satie wrote a ballet, Parade, and this movement shares its riotous surrealism. The bizarre juxtapositions of key reach a climax with the opening crashes of the finale. A policeman blows his whistle in a vain attempt to halt the carnage. Not a note is wasted. Even if you could hardly tell that Ibert loved Wagner, or followed the radical journey of Boulez and friends with interest, the Divertissement would be less diverting if it lacked such polymathic perfectionism.