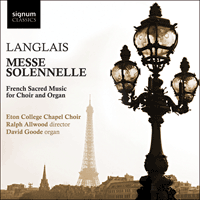 Eton College Chapel Choir perform an enchanting selection of twentieth Century French Choral and Organ music. As well as music by composers who were at the heart of French musical life in Paris, such as Olivier Messiaen and Francis Poulenc, this disc features works by lesser-known composers such as Déodat de Severac and Pierre Villette. The choir’s history can be charted back to the founding of Eton in 1441 by Henry VI. The present day choir is comprised of Eton students (with the occasional master), about half of whom have been choristers at cathedrals or chapels before they come to Eton for their secondary education.

'Received unsolicited and gratefully, this is a great album … the production is first class, with full informative notes, all the sung texts and several illustrations. Eton College Chapel lends its acoustic to a quite exceptional choir/organ disc, which will give pleasure also to people who may not be regular choral music collectors' (Musical Pointers)» More
'Pluses first: this is a great programme of too-seldom-heard 20th-century French choral works, headed by Jean Langlais' Messe solennelle, along with organ works by Messiaen and Roger-Ducasse, expertly played by David Goode (who acts as accompanist elsewhere on the disc)' (Classical Music)

The six composers represented in this programme of 20th Century French choral and organ music provide an interesting insight into the degree to which the nation’s musical life revolved around Paris, and particularly the Conservatoire, that legendary institution with which anybody who was anybody in French Music during the late 19th and 20th centuries seems to have had some connection. It was indeed a closely-knit community of musicians. Olivier Messiaen (1908-1992), the best-known composer amongst them, and renowned organist at L’Eglise de la Trinité, studied there from the age of 11, and returned as professor of harmony (from 1941) and composition (from 1966), staying until his retirement. Amongst Messiaen’s teachers was Marcel Dupré (1886-1971), one of the century’s most noted international organ recitalists, who had, himself, studied there from a young age, and spent much of his lifetime as organist at St. Sulpice, a short metro journey under the Seine. He had inherited the post from his Conservatoire teacher, Widor. Another of Dupré’s Conservatoire pupils was Jean Langlais (1907-1991), who spent much of his working life as organist at St. Clotilde, a short walk up the Rue de Grenelle from his teacher’s church. Langlais was blind from a young age, and returned to teach at the Institut National des Jeunes Aveugles, where he had studied as a child; he also taught at the Schola Cantorum. Representing the oldest generation here is Jean Roger-Ducasse (1873-1954), who studied at the Conservatoire with (amongst others) Gabriel Fauré, before succeeding him as professor of composition.

By contrast, Déodat de Severac (1872-1921) and Pierre Villette (1926-1998) were a little too much on the fringe to make it into the Parisian ‘Magic Circle’: the former travelled from his native Languedoc, but opted for the Schola Cantorum, studying with Vincent D’Indy before returning to the south, where his compositional career remained relatively unknown. Villette, too, studied in Paris at the Conservatoire (with Maurice Duruflé), but soon returned to the provinces in order to become director of the Conservatoire at Besançon, before moving to Aix-en-Provence, where he spent the rest of his life, his music again remaining in comparative obscurity. That leaves Francis Poulenc (1899-1963): by the time he had started having composition lessons with Charles Koechlin he was already notorious as a member of the popular clique of young composers known as Les Six, whose predominant “two fingers-up-at-the-establishment” attitude very much captured the spirit of the Twenties. Of all the members of Les Six, Poulenc went on to earn himself the most enduring reputation as a composer.

Composed in 1951, the Messe solennelle is perhaps Langlais’ best-known choral work. The piece is scored for four-part choir and two organs, written with the traditional French cathedral configuration in mind: passages of music on the Grand Orgue, which would usually be situated high up on the west wall of the cathedral, alternate with choral sections accompanied by the smaller Orgue de Choeur situated near the choir towards the east end. In the absence of two suitable organs, however, the work can be played on one, as is the case in this recording, where the majestic 1902 Hill proves more than adequate. Langlais’ language is characterised by melodies which—although original creations—show a distinct affinity with plainsong. These, combined with vivid modal writing, striking use of quasi-mediaeval parallel fourths and fifths, a colourful control of dissonance, and a mastery of the organ’s tonal palette, give the work an arrestingly unique and instantly recognisable quality.

Although De Severac’s varied oeuvre includes several operas and stage works, a number of substantial orchestral and chamber works, and many solo instrumental pieces, his charmingly simple setting of Tantum ergo has become perhaps his best-known work, especially in England, where it has been widely adopted by church and cathedral choirs. Its attractive hymn-like simplicity and diatonic harmonies give it an appealing directness of expression.

The style of Pierre Villette combines a number of varied and popular influences ranging from the plainchant of the traditional Catholic liturgy to jazz, from the soft-toned romanticism of Fauré to the colouristic harmonies of Debussy and early Messiaen. All of these combine to form a colourful and often rich harmonic language. His choral music has become popular in recent years, largely due to performance by choirs outside France. Indeed, although his instrumental and solo vocal music has remained comparatively in the shadows, Villette must now be amongst the most widely performed composers not yet to have gained an entry in the Grove Dictionary. The sheer complexity of his harmony in many of his works is perhaps partly to blame for the lack of performances for many years. That said, the four pieces recorded here rank amongst his simpler motets. O salutaris hostia, written in 1954, is somewhat the most challenging of the four—both to sing and to hear—while the remaining three motets are late works, written between 1992 and 1995, and present a largely melodious and approachably contemplative stance. In all four works, Villette’s practice is to present his initial melodic material using fairly diatonic harmony, reserving the lusher chromaticism for more developmental phrases, and—his trademark—a lavish splash of harmonic colour in the final phrase of each work.

The composer of the broadest scope and widest range of influences represented here is without doubt Olivier Messiaen. Initially inspired by the colouristic and exotic harmonies of Debussy, his music incorporated elements as diverse as the rhythmic features of ancient Greek and Hindu music, the modality of Oriental music, and birdsong. Most of his melodic and harmonic material is based on a complex system of ‘modes of limited transposition’ which he pioneered, lending an instantly recognisable quality to all his works, while, underlying his entire compositional outlook was his unshakeable Roman Catholic faith. As a teacher of composition he was himself very influential, and certain aspects of his own work (particularly his exploration of the compositional ideas central to “total serialism”) can be said to have directed the course of the Avant-Garde style spearheaded by Pierre Boulez in the 50s and 60s, although he did not himself choose to pursue that path. Indeed, such was his stature as a composer that—for the most part at any rate—he was able to maintain the respect of both his Avant-Garde colleagues and the more traditional ones. The two works included in this programme represents opposite ends of his compositional career. The unaccompanied motet O sacrum convivium is an early work, revelling in a static chromaticism, which lends the work a fervently devotional quality. Though much of Messiaen’s music is overtly Christian in content, this is his only liturgical motet; the composer, with characteristic eccentricity, believed that plainsong was the perfect, and unsurpassable, music with which the liturgy should be adorned. By contrast, Institution de l’Eucharistie, from the Livre du Saint Sacrement, is a late work; here the heart of the work is in the juxtaposition of the purity of the major chord with sonorities of ever-increasing dissonance, culminating in an arrestingly discordant cluster at the work’s climax. This gradual harmonic progression is embellished with birdsong-like flourishes in the right hand, making use of some of the instrument’s more colourful tones.

Marcel Dupré was primarily known in his lifetime as an organist and talented improviser and composer of organ music, though, like many of his contemporaries in the organ lofts of Paris, he contributed a number of choral works to the repertoire. The charming motet Ave verum is appealing through its unassuming simplicity. An ingratiating descending theme is presented in imitation over lulling repeated chords in the organ, becoming gradually more chromatic and declamatory as the text demands, before returning to the tranquillity of the opening.

Until 1936, Poulenc had little to do with the music of the church in his composing life. When, however, he dramatically rediscovered the Roman Catholic faith of his childhood in the wake of the devastating loss of a close friend in a car accident, there followed a significant number of sacred compositions, both liturgical motets and concert works (such as the large-scale Gloria and the opera Dialogues des Carmélites). His setting of the Salve regina is typical of his unaccompanied motets. Poulenc writes in a direct, homophonic style; his harmonic language is tonal, with occasional colourful use of chromaticism and added-note (sometimes verging on “wrong-note”) harmonies. The result is a uniquely appealing language which simultaneously expresses devotional fervour, spiritual serenity, and a down-to-earth simplicity.

Gabriel Fauré’s music is never too far from the musical language of his pupil, Jean Roger-Ducasse, though the younger composer at times adopts a more colourful chromaticism to his language, with impressionistic touches. The short but sublime motet Regina caeli is scored for soprano soloist (in this performance the part is taken by a boy treble) and four-part choir. In a manner not unlike that of Debussy, Roger-Ducasse makes particularly effective use of inversions and added-note harmony, which lends the music an ethereal quality. The Pastorale for organ is another work of sublime beauty, though on a much larger scale. It is surprising that the piece is little-known and rarely performed, for it is a veritable virtuosic masterpiece—and one which manages to convey a real grandeur of structure without ever losing its lightness of touch. The work is based on a serene siciliano theme, which the composer gradually develops with ever-increasing harmonic daring and textural intricacy, exploiting a huge range of the instrument’s tonal colours, and building up a thrilling climax, before subsiding once more to the peaceful manner in which it started.