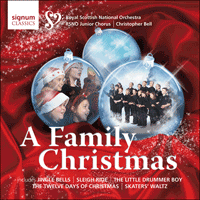 The Royal Scottish National Orchestra’s Christmas concerts are one of the highlights of this celebrated ensemble’s musical year. Joined by the RSNO Junior Chorus, this disc captures some highlights of these concerts with a selection of festive favourites both old and new.

'Scottish audiences will be familiar with Christopher Bell’s lively, eclectic Christmas concerts. Here, Leroy Anderson’s Sleigh Ride sites alongside The Little Drummer Boy and Jingle Bells. The mix is infectious and the performances full of fun and panache' (The Daily Telegraph)
'There are plenty of Christmas albums around, as you know, but this one is blessed with an extra dose of charm' (Classic FM Magazine)» More

Since I started doing Christmas concerts with the RSNO, every year I have included a song that invites the audience to join in with actions. The five I have included here are amongst the most popular.

Christmas Alphabet
This song made famous by Dickie Valentine appealed immediately because the letters spelling C-h-r-i-s-t-m-a-s are acted out by the audience à la Village People’s YMCA! I set about devising the actions and it has been a hit at many concerts over the years. “S” has provided particular amusement. You can of course make up your own actions, but the shapes shown in the booklet are roughly what we do at RSNO Christmas concerts!

The Twelve of days of Christmas
I am sure that the RSNO was the first to do this at Christmas concerts and so these are the definitive actions. Emulated wildly in other places I am told.

1 A Partridge in a Pear Tree: Flap elbows to body
2 Turtle dove: Rest your head on loved one’s shoulder
3 French Hens: Place hands on head and flap like rabbits ears (!)
4 Calling birds: Cup hands round mouth and make this a loud call
5 Gold Rings: Arms held above your head to make a ring
6 Geese a-laying: Squat down to lay an egg
7 Swans a-swimming: Imitate breast stroke in front of you
8 Maids a-milking: Milk imaginary cow at face level
9 Ladies dancing: Turn through 360 degrees
10 Lords a-leaping: Leap in the air
11 Pipers piping: Imitate a piccolo (I have always assumed it was not intended to be the Scottish pipes!)
12 Drummers drumming: Vigorous drumming to the side at waist height

Jingle Bells
At some stage in my past someone asked the audience I was in to get out car keys and jingle them along to Jingle Bells. It makes a truly magical sound and covers up the fact that most audiences don’t know the words for the second verse!

Schneewalzer
This arrangement of a Bavarian waltz instructs the orchestra to sway right and left in the chorus. There has never been an official instruction to jump up randomly, though you might find that happening at our concerts! Audience members raise their arms above their heads and sway gently in time to the music.

The penguin song
A combination of a simple, cumulative action song, Have You Ever Had? and Consider The Penguin by Keith Stannard.

Verse 1: moves the right arm, with the hand at 90 degrees like a penguin’s wing sticking out bouncing against your body in time to the beat.
Verse 2: adds the left arm,
Verse 3: adds the right leg,
Verse 4: adds the left and right alternately (or you will either do star jumps or fall over!) and
Verse 5: adds the head nodding! Merry Christmas!