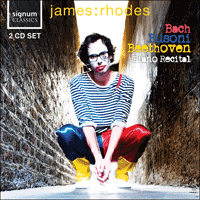 'As someone who has never been to a music college, done my diploma in piano playing or participated in any competitions, I feel particularly blessed to have been able to choose to learn pieces of music for the simple reason that I absolutely love them. I have never been forced to slave for hours over a piece of music that doesn’t make my skin crawl with pleasure or raise my heartbeat to almost viagra-induced levels. This album is a perfect example of me as a musician and piano-fanatic choosing works that for as long as I can remember have blown my mind'
James Rhodes (2010)

'An innovative and imaginative musician of real talent … his best playing here is the Bach Partita, outstanding in every way—lightly pedalled, lucidly voiced, with a lithe, rhythmic buoyancy and deeply expressive Sarabande' (Gramophone)
'[James Rhodes] obviously loves the big-boned majesty of Busoni’s transcription of Bach’s Toccata, Adagio and Fugue in C BWV 564, and brings a wildly emotional, personal insight into both Beethoven’s Sonata No 30 in E opus 109 and Bach’s Partita No 6 in E minor BWV 830 … fresh, vital and undeniably exciting' (The Observer)
'These are accounts to challenge the competition; his musicality and technical mastery held us with complete attention easily … recommended' (Musical Pointers)

One of my favourite pianists, Glenn Gould, retired from public performance at an early age to focus exclusively on the recording studio. The title of this album was inspired by Gould from an interview he gave re the pros and cons of studio work vs live performance. He was referring to the ‘womb like security the studio provided’ and did not want all the academics out there analyzing him on the basis of him using the term ‘womb’. Before he made that statement he was wise enough to suggest that ‘now at this time would all Freudians please stand aside’. My feeling is that classical music can tend to take itself too seriously (you should have seen some of the emails I got about the title of my previous album: ‘Razor Blades, Little Pills, and Big Pianos’!). The title of this album is my, perhaps rather awkward attempt to say that even though I have not arrived on the classical music stage via the conventional route (competitions, conservatories etc.), even though I have not been performing from the age of 6 and as a teenager was more interested in Kylie than I was in practicing scales, my goal is, as it always will be, to make my career about one thing and one thing alone—music.

I feel particularly blessed to have been able to choose to learn pieces of music for the simple reason that I absolutely love them. I have never been forced to slave for hours over a piece of music that doesn’t make my skin tingle with pleasure or raise my heartbeat to almost viagra-induced levels. This album is a perfect example of me as a musician and piano-fanatic choosing works that for as long as I can remember have blown my mind.

We start with Busoni’s masterful transcription of Bach’s Toccata, Adagio & Fugue. Originally written by Bach for the organ in 1710, Ferruccio Busoni transcribed it for piano in 1900. As Busoni himself said, ‘From Bach I learnt to recognize the truth that Good and Great Universal Music remains the same through whatever medium it is sounded’ and as anyone who has listened to Vladimir Horowitz’s sublime performance of this piece from his 1965 comeback Carnegie Hall concert will attest, Busoni is more than capable of translating this mighty organ work into a cathedral of a piano piece whilst losing nothing of its original genius.

Busoni liked to cleanse works of ‘the dust of tradition’. He believed that if Liszt was the summit of piano playing, Bach was the foundation of it and his respect and admiration of Bach is evident throughout all of his transcriptions.

All the way through this work there is great humour (for example the organ pedal solo in the Toccata, the improvisatory and bouncy fugue subject) and intense longing (the beautiful, singing, dissonant Adagio)—Busoni himself writes wonderful instructions to the performer: quasi improvvisando, robustamente, con intimo accento, umoristico, and my favourite, quasi parodisticament (which I take to mean: play this passage as if parodying the original theme). This is very much a kind of red-blooded Bach with whom few are familiar and in Busoni’s hands the piano is more than a match for the sonic capabilities of the organ.

We then move on to Beethoven’s 30th piano sonata. This work is the first of the trilogy of his last sonatas that represents the absolute pinnacle of his writing for the piano. In three movements, with a bipolar first movement (fluid beauty interspersed with questioning hesitation), a furious second and an otherworldly and spiritually profound last movement (a set of theme and variations), it has been in my head ever since I was a child. Allegedly as a child himself, Beethoven was almost beaten to death twice by his alcoholic father, he was born into a household of poverty, disease and neglect. He even had to play the viola as a child in order to make money.

That a man so riddled with pain, depression, abuse and, of course, deafness, can create a work of such beauty and redemption is and will always be an inspiration to me.

It is often the case that tortured souls channel their emotional damage into something extraordinarily creative, so it is no surprise that from this hellish childhood sprang a man who singlehandedly dragged musical language from Classical to Romantic. ‘Interiority’ is the word I can best think of to describe his music (especially his later works). This music is not about the glory of God or the whims of the aristocracy, like so much of what had come before. It is all about feelings and something deep inside us all that manages to transcend limitations and climb to a higher plane of existence, something which quite clearly Beethoven achieved on a scale that for me goes beyond human and into the ethereal.

Next up is Bach’s desolate and angst-ridden 6th Partita. This is not an easy piece to listen to. Longer than all but one of Beethoven’s 32 sonatas, it was written after the death in infancy of several of his children (an all too common event in the early 1700s) and is soaked through with grief, melancholy and rage. Bach fathered twenty children by two different wives and only ten survived into adulthood. At a time when grieving was not permitted, especially for men, Bach clearly channelled his pain through his compositions and of all his six Partitas this is the one that grabs you by the neck and doesn’t let go.

The word ‘Partita’ can be best translated as ‘suite’, something Bach seemed to compose in lots of six—6 English suites, 6 French, 6 Cello and 6 Partitas to name a few (conspiracy theorists and Freudians among you read into that what you will). Heavily influenced by the Italian and French style—intricate ornamentation, sprightly dance movements etc.—the six partitas are the most technically demanding of all of Bach’s keyboard suites. Works like this were strikingly original—as Johann Forkel (the publisher of Bach’s first biography) said: ‘Such compositions for the Clavier had not been seen or heard before, and a young man who could play them was sure of success. Our young players of today would profit by the study of them, so brilliant, agreeable, expressive, and original are they’.

The Partitas were written around 1726, when he was Director of Music in Leipzig—a hugely prestigious job which made outrageous demands on Bach’s time as a composer, choirmaster, and teacher. It is testament to his phenomenal energy that he managed to compose so many works (including the Partitas) beyond the remit of this job.

Written on the title page of the set of Partitas was the following statement: ‘composed for music lovers to refresh their spirits’. Which is absolutely fine for the first five Partitas but as I hope you can hear, for the 6th it is pretty much taking the piss. I know of no other keyboard works of Bach that are so intrinsically and consistently dark, angry, and furious.

At a time when Bach was continually receiving various forms of influence from the church and court, his message was clear: he was a force to be reckoned with. In my opinion, along with the Goldberg Variations, this Partita is his greatest keyboard composition. It comprises seven movements, all in E minor, with a final angular, aggressive, brutal fugue that is as uncomfortable to play, as it is to listen to—in a just-ran-a-marathon kind of way.

To finish, I’ve chosen Bach’s keyboard transcription of the adagio from Alessandro Marcello’s oboe concerto. Marcello was a contemporary of Bach: philosopher, mathematician, poet, nobleman and a composer. His oboe concerto is the best known of his works today, thanks in no small part to Bach’s transcription of it. It’s beyond me that some people consider Baroque composers to be un-romantic—one’s whole heart and soul can be poured into this piece either when playing or listening to it.

This work was the first one I learned away from the piano by simply studying the score. I was in a locked psychiatric ward at the time and these two pages of musical notes offered me more comfort, peace and hope than any of the medication they shoved in me.

Music has always been a partnership between composer, performer and audience, and I am always thrilled to hear what people think about the music and the performance. Do feel free to let me know your thoughts be they good, bad or indifferent, via Twitter or my website.