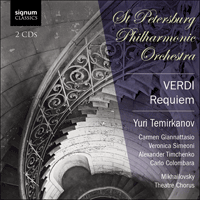 Signum Records are proud to present the first release in a new series of live orchestral recordings featuring the illustrious St Petersburg Philharmonic Orchestra, led by their chief conductor Yuri Temirkanov. These new recordings have been made possible thanks to the recent refurbishment of their home concert venue, the Grand Philharmonic Hall, allowing many of us to hear for the first time the excitement of the Philharmonic’s performances in their resident city of St Petersburg.

'The darker side of Verdi suits the Russian mood. La Scala itself would be hard-pressed to offer more appropriately sounded and coloured singing and playing than that provided here by the Mikhailovsky Theatre Chorus, with its dark-toned Russian basses, or the St Petersburg Philharmonic itself … Temirkanov has his own special affinity with aspects of the Verdi style … Under Temirkanov, sober respect for text and music is the order of the day. The result is a scrupulously prepared performance that is devout without taint of religiosity, considered but never dull' (Gramophone)
'This is a full-blooded performance of Verdi 's late work … full marks for passion' (The Daily Telegraph)

By the time Verdi came to compose Aïda in 1870, it seemed as if his time as a composer was nearing its end. With some 23 operas to his name, he was the grand old man of the genre in Italy and was revered throughout his homeland and much of the rest of Europe as one of the most important musical figures of the age. His first great operatic success story was Nabucco, which had catapulted him to instant fame as a young man, 30 years before Aïda and, after the incredible trio of Rigoletto, Il Trovatore and La Traviata in the early 1850s, Verdi’s star never looked likely to fade. But, in the early 1870s and fast approaching 60 years of age, the composer appeared to be happy enough adopting the life of a country squire, pottering about on his farm at Sant’Agata, outside Milan and overseeing various productions of his stage works. He completed only two more operas in the last 20 years of his life, but as these happened to be a pair of masterpieces, Otello and Falstaff, he did not quite follow Rossini’s example of laying down his pen for the latter part of his adult life.

The death of the poet and novelist Alessandro Manzoni in 1873 spurred Verdi immediately back into compositional action. He proposed to the Mayor of Milan, via his publisher Ricordi, that he would like to compose a requiem for the great man to commemorate the first anniversary of his death. That the proposition was so readily agreed is testament not only to Manzoni’s popularity as the writer of Italy’s most widely read novel, I promessi sposi, but to his position as an ardent Italian nationalist and prime literary supporter of the movement for the liberation and unification of Italy—il Risorgimento. Still regarded as one of Italy’s most cherished artistic treasures and, indeed, a paradigm for the modern Italian language, I promessi sposi was an instant and runaway success from its first publication in 1827. It remains the most popular historical novel in Italy and has undergone numerous treatments in film, opera and other media. While its subject matter seems innocent enough—Lombardy under oppressive Spanish rule in the early Seventeenth Century—readers of the day were quick to seize on the parallels between the Spanish overlords and their own eighteenth-century predicament under Austrian rule. Verdi was an enormous fan of the novel and his earliest operas reflect as much—picking up on the growing nationalist sentiment of the times. Even the redoubtable Sir Walter Scott, supplier or inspirer of some of the most popular song lyrics and opera libretti of the century, thought I promessi sposi unrivalled as the finest romance of the day.

Despite Manzoni’s advanced age (he was 88 when he fell down some church steps to his death), when Verdi heard of his death he was distraught: ‘Now all is over, and with him ends the most pure, the most holy, the greatest of our glories’. To Verdi he was more than just a national hero and sublime author, but also a stellar personality and humanitarian without parallel. Such was his admiration that he appears to have deliberately avoided meeting Manzoni and when his wife, after a meeting with Manzoni, brought back a portrait signed, ‘to Giuseppe Verdi, a glory of Italy, from a decrepit Lombard’ he returned the favour, inscribing his own portrait with the words, ’I esteem and admire you as much as one can esteem and admire anyone on this earth, both as man and true honour of our country so continually troubled. You are a saint, Don Alessandro’. Verdi did eventually overcome his shyness and the two Italian masters met in 1868 in Milan. The composer, though, was still overawed, writing, ‘What can I say of Manzoni? How to describe the extraordinary, indefinable sensation of that saint…produced in me’. Verdi could not bear to attend Manzoni’s funeral and instead visited the burial site alone at a later date to pay his respects.

By late June 1873, Verdi was already at work on the Requiem and the mass was complete by early April the following year. With Rossini and Manzoni dead, he was now the only survivor of the revered Italian artistic triumvirate. Verdi had suggested that a requiem mass be commissioned from leading Italian composers a few years earlier, on Rossini’s death in 1868. While the composite work was finished by all parties, it was never performed due to various disagreements, and so Verdi’s contribution—the concluding Libera me—lay unsung in the archives of his publisher, Ricordi. Noticed a couple of years later by a perspicacious conductor, Alberto Mazzucato, Verdi was soon in receipt of a letter, Mazzucato describing the movement as, ‘the finest, the greatest and the most vastly poetic piece of music that could be imagined’. At the time he was relatively unmoved, claiming that while, ‘Your remarks would almost have planted the desire in me to set the mass in its entirety at some later date…It’s a temptation that will pass like so many others. There are so many Requiem Masses; there’s no point in adding one more’. Never the most religious of men, Verdi veered between atheism and agnosticism throughout his adult life, and so only an event of the magnitude of Manzoni’s passing could trigger the desire to complete the mass and record his personal debt to the writer.

The first performance of the Messa da Requiem took place as planned on the first anniversary of Manzoni’s demise, on 22 May 1874 in the church of San Marco, Milan, with a chorus of 120, the female choristers apparently gaining special dispensation from the church authorities in order to sing in a clerical building. Fittingly, the work was performed at La Scala opera house three days later, and again the mass was a triumph. Not everybody was happy, though. The esteemed conductor and oftentimes colleague of Wagner, Hans von Bülow was in Milan at the time of the initial performances and announced that he should not be considered among the ‘foreigners’ in the city to hear the work and, more infamously, in the Allgemeine Zeitung, that the Requiem was ‘Verdi’s latest opera, in ecclesiastical robes’. Nonetheless, the Requiem met with major success in its many subsequent European performances, and though the Italian press were scandalised by von Bülow’s remarks, he was swiftly put in his place by none other than the mighty Brahms: ‘Bülow has made an almighty fool of himself. Only a genius could have written such a work’.

Of course, there are many who would still claim that von Bülow has a point. The mass does include extremes of dynamic markings (from the ppp with which the work opens and closes, to the fff, tutta forza of the famously awe-inspiring Dies irae repetitions) and a multitude of tempo indications producing a fair amount of drama which could be said to have its roots in the operatic world. But the softer, poignant passages that abound in the piece are testament to the deep conviction with which Verdi was composing—not necessarily a religious conviction, but the fervour of a final farewell to two beloved Italians—Rossini, and most especially Manzoni. As to whether the Requiem can truly ever escape the world of opera when written by a man who spent his life composing for the theatre, let’s leave the last word to Verdi himself: ‘One must not sing this Mass in the way that one sings an opera, and therefore phrasings and dynamics that may be found in the theatre won’t satisfy me at all, not at all’.