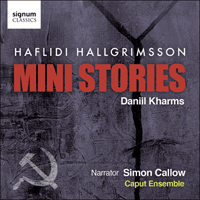 Haflidi Hallgrímsson is one of the leading figures in Icelandic musical life, and his work Mini Stories sets the surreal poetry of the soviet-era writer Daniil Kharms to music. Whilst internationally renowned actor Simon Callow brings Kharms’s texts to life, the Icelandic Caput Ensemble reflect the mood with stellar performances of Hallgrímsson’s evocative accompanying composition.

My music-theatre composition Mini Stories was commissioned by the Northlands Festival in 1997 and premiered at the Mill Theatre in Thurso, Scotland on 8 September that same year, with the Russian actor Victor Sobchak as the narrator and the LYS Ensemble performing the music. The piece was revised in 2002, providing the version heard on this recording.

I was introduced to the writings of Daniil Kharms by an old friend and Russophile, Ken Reynolds, in the early 1970s. It was a memorable discovery that produced a strong feeling of identification, and the desire to use some of Kharms’s writings for a music-theatre piece if and when an opportunity would arise. Eventually, Kharms’s writings inspired me to compose not only Mini Stories, but also a large scale opera, Die Wält der Zwischenfälle (The Whirld of Incidences) which was co-commissioned by Stadttheatre Lübeck and Netzzeit Vienna. The opera was premiered at Stadttheatre Lübeck on 11 February 2004, and received its Austrian premiere in Vienna the following year.

The stories by Kharms that I selected for this work come from a collection of short stories entitled Incidences, that were found amongst papers that came into the possession of the American professor George Gibian on one of his visits to Eastern Europe in the late 1960s. Incredible as it may seem, these amazing pieces written in Soviet Russia more than 70 years ago could easily sit beside the Western absurdist literature of the sixties and seventies: the stories range in content from mundane everyday events to black humour, absurd occurrences, mindless violence, mild eroticism and to stories reminiscent of fairy tales. The last story I use refers to a red-haired man, who is gradually “dismantled” until he exists no more. It is tempting to see this last story as a reference to the near total annihilation of peoples’ freedoms during Stalin’s reign of terror, when the safest conduct was to be virtually “unseen” and “unheard”. It also brings to mind the final days of Kharms’s life, with his prolonged death from starvation in a prison hospital in Leningrad in 1942.

On a first reading, the stories in their extreme brevity may seem startlingly simple, and even frivolous, but on closer inspection they begin to assert their grip on the reader. They come across as humorous, cynical and even cruel in their observations of human existence and behaviour. There is a disturbing contrast between the content of the stories and the minimal number of words that Kharms employs, which sometimes threatens to undermine the content of the story. Many of the stories are so rigorously pared down that they no longer seem to fit any established patterns. On the other hand, some are imbued with an unworldly atmosphere, as if written by an ‘all-seeing’ superior being, observing mankind from afar.

These stories are difficult to classify and hard to interpret. To most readers they will seem inscrutable, but that was no doubt Kharms’s intention. As Anatoli Aleksandrov noted of Incidences: “The world has been losing its agreeable order—it is in discord, even nightmarish. Without order, there can be no hierarchy, and without hierarchy there can be no sense of value”. To quote further from Neil Carrick’s monograph, ‘Daniil Kahrms: Theologian of the Absurd’: “The stories pose the reader a puzzle, but apparently provide insufficient clues for its solution”.

When I started work on Mini Stories, my original intention was to create a music-theatre piece that could be staged in either a theatre or as part of a concert, without requiring any theatrical props. Having chosen twelve stories from Incidences, I devised an order that was intended to give a sense of underlying structure to the whole composition. By placing the shortest stories at the beginning, and gradually incorporating the more substantial ones, a focal-point was reached with A young man who astonished a watchman. This story reveals a mystical, even religious side to Kharms. Two much shorter stories then follow, with the last, Blue notebook No 10, the shortest of all. It is an apt text for bringing Mini Stories to its conclusion. Kharms’s sad and lonely death certainly comes to mind when reading or listening to it.

In composing the music, I intended the texts to be recited one by one, with my own musical ‘mini stories’ acting as interludes, hopefully enhancing the absurdity of the text by existing on a different plane. The titles of the interludes are my own, except for the final piece (Victory Boogie Woogie—taken from the title of Piet Mondrian’s final, unfinished work), and reflect my original intention of creating music that is at variance with the text itself.

As the composition progressed, the absurdist nature of the stories began to assert their influence, and to dictate to a degree the musical content of the interludes. Not only did the essence of the text infiltrate the music, but the atmosphere of Leningrad—as I imagined it to be during that period—seems to be evoked, leading to some highly atmospheric music.

I decided to revise Mini Stories in 2002, and to incorporate fragments of quiet music as a background to the narration of the text, to give the impression of a near-continuous sonic presence. On repeated listening it seems to me, at least, that these new connections have given Mini Stories a greater sense of unity.

It’s worth mentioning in closing that Kharms was a great lover of music, and above the harmonium in his room was a sign that read: “Here we only play Bach”.