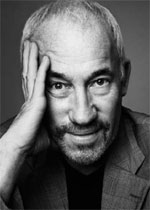 Simon Callow was born in South London in 1949. He lived in Northern Rhodesia (now Zambia) for three years; when he returned to England he became a pupil at the London Oratory Grammar School, of which he eventually became Head Boy. In 1967, after leaving school he went to work in the Box Office of Sir Laurence Olivier’s Old Vic Theatre. In 1968 he went to Queen’s University in Belfast, but after nine months he ran away to become an actor. He left the Drama Centre in 1973 to take his first job, playing the front end of a horse in Büchner’s Woyzeck at the Edinburgh Festival.

His first West End appearance was in 1975 opposite Harry Secombe in The Plumber’s Progress; later that year, he worked for Gay Sweatshop. He then joined Joint Stock Theatre Company for two years, played Titus Andronicus at the Bristol Old Vic, Arturo Ui at the Half Moon Theatre and Eddie in Mary Barnes at the Royal Court, before joining the National Theatre to create the part of Mozart in Amadeus and perform all of Shakespeare’s Sonnets. He has since worked at the Royal Court Theatre, in the West End, at the National Theatre, and at the Bush Theatre and the Southwark Playhouse. He has toured extensively, an activity about which he is passionate. In 1997, he acted in The Importance of Being Oscar, following this in 2000 with The Mystery of Charles Dickens, which he played for four years in Britain, Ireland, America (New York and Chicago) and Australia (Sydney and Melbourne). He has appeared in The Woman in White and, for the RSC, Merry Wives: the Musical. Recently he appeared playing Pozzo in Waiting for Godot with Ian McKellen, Ronald Pickup and Patrick Stewart at the Theatre Royal Haymarket.

His films include Amadeus, A Room with A View, Four Weddings and a Funeral, Thunderpants and The Phantom of the Opera. He has directed over thirty plays, musicals and operas, including the original West End production of Shirley Valentine and, most recently, The Magic Flute at Holland Park Opera, with designs by Tom Phillips.

He was appointed CBE in 1999 and is an honorary doctor of Queen’s University Belfast and Birmingham University.