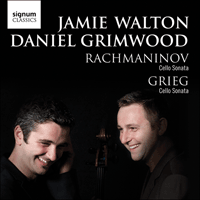 Jamie Walton is a rising international soloist with a distinctive voice of his own. Renowned for his purity of tone and uncompromising nature, Jamie is now being compared by critics to some of the great cellists of the past. He and pianist Daniel Grimwood appear regularly at Wigmore Hall and Symphony Hall, Birmingham. They have also appeared in recital at the Bridgewater Hall, Fairfield Hall, Cadogan Hall and St John’s, Smith Square as well as at the Chateauville Foundation, Virginia—a personal invite from Maestro Lorin Maazel. This is Jamie’s third release with Signum Classics. His previous releases have been received with unanimous international acclaim and there is little doubt that this latest release will be as successful.

'The musical give-and-take of these players is excellent: they seize upon the music with enthusiasm, energy and sensitivity—one can almost sense that they are keen to show us just how fine this music is … This album can certainly be strongly recommended. It is good to see these young artists taking up these works with such conspicuous success' (International Record Review)
'Fluent and thoroughly satisfactory … a very satisfying performance' (Musical Pointers)

Rachmaninov Sonata for Piano and cello in G minor, Op 19
After graduating from the Moscow Conservatory with full marks in composition and collecting the rarely awarded Great Gold medal of the conservatory, the 19-year-old Rachmaninov set about making a career for himself. He was readily snapped up by the publishing house, Gutheil, which speedily published his medal-winning opera, Aleko, as well as the Prelude in C sharp minor, Op 3 No 2—a titanic piano miniature which gained a quite extraordinary popularity in its day. Works were flowing freely from his pen and all seemed well with his world. But an absolutely disastrous premiere of his First Symphony brought everything to a standstill. Rachmaninov himself describes the effect the outright rejection of the symphony had on him:

There are serious illnesses and deadly blows from fate which entirely change a man’s character. This was the effect of my own symphony upon myself. When the indescribable torture of the performance had at last come to an end, I was a different man.

For the next three years, the composer was all but paralysed when it came to producing anything of significance. Plenty of attempts were made, but more often than not, Rachmaninov would sink back into his compositional torpor and thus little came to fruition. Through the good offices of his concerned friends, he was taken to meet a neurologist, Dr Nikolay Dahl, who spent the first four months of 1900 with the composer. Although Dahl was a specialist in hypnotherapy, there is scant reportage of what actually went on in his consultations. Nevertheless, whatever transpired during these meetings clearly had a positive effect as Rachmaninov was soon back at work with renewed vigour. The first result of this new-found confidence soon became his most popular orchestral composition, the Piano Concerto No 2 in C minor, Op18—a work he gratefully dedicated to Dr Dahl. There was to be no repeat of the debacle over the First Symphony, as the Second Piano Concerto was a triumph at its premiere.

The very next opus number in Rachmaninov’s catalogue is the Sonata for Piano and Cello, Op 19 and the work displays similar musical attributes present in the Second Piano Concerto. Much like the concerto, the sonata is a largescale, lyrical work with a bravura, ranging piano part which, at times, almost threatens to overpower the cello writing. The composer himself was keen that the two instruments act as equal partners in the musical argument rather than the piano being seen to be adopting its usual accompanying role - the thought being reflected in the order of the instruments in the work’s title.

Written in 1901, the sonata is cast in four movements and dedicated to Anatoly Brandukov, the cellist who premiered the piece, with Rachmaninov at the keyboard, on 2 December 1901. The opening movement unfolds quietly before entering more passionate territory, with the wide-ranging and intense piano part surrounding the alternately song-like, soulful or soaring cello line. The Scherzo’s menacing first theme has the most engaging of counter-weights in the succeeding song for the cello, the piano reprising delectable figurations from the Second Piano Concerto. The concerto also informs the slow movement which is shot through with much of the same long-phrased lyrical intensity. This is Rachmaninov at his heart-easing best, the rapt Andante’s melody growing in intensity as the cello soars and the piano part increases in richness. The Finale opens with an upbeat, busy figure, an appropriately dignified cello theme providing poetic ballast. The themes indulge in intricate interplay, the equal instruments integrated musically as the movement closes with a barnstorming coda.

Grieg Cello Sonata in A minor Op 36
Grieg was scarcely more prolific even than Rachmaninov when it came to chamber music—each composer providing no more than a handful of published works for the genre. While the Russian naturally excelled at the big-boned, super-scale orchestral statement, Grieg rarely warmed to the medium. In total, the Norwegian’s output of instrumental, chamber or orchestral music in the more extended classical forms numbers only eight successful compositions. The youthful Symphony in C minor, a single piano sonata and a brace of violin sonatas were followed by an 1877 string quartet and latterly by his Third Violin Sonata and the Cello Sonata. It might be noted, though, that the most brilliantly wrought of the early works, the Piano Concerto in A minor, Op. 16 remains, alongside Rachmaninov’s Second Piano Concerto, right at the top of the general public’s list of favourite works for piano and orchestra. Nonetheless, Grieg was significantly more successful, in musical, financial and popular terms, with the intimate and refined arts of the piano miniature and the accompanied solo song. His 10 volumes of Lyric Pieces together with his equally impressive output of songs were consistent best sellers. His most famous song, Jeg elsker Dig (I Love You) sold some 60,000 separate sheet music copies alone between 1883 and 1906. By the turn of the century, he was undeniably one of the most popular living composers, in privatehomes and concert halls, in the Western world.

With the exception of the superlative works of Beethoven and Brahms, the Romantic era was less kind to cellists than to pianists or violinists when the classical sonata is considered. Somehow the cello seemed not to have fired the imagination of too many of the top rank composers, perhaps because there was no galvanising cello equivalent of the devilish violin of Paganini or the demonic piano of Liszt. The more welcome, then, is Grieg’s sole venture into the territory. His Cello Sonata in A minor, Op 36 was composed as part of a package arranged through his Leipzig Publishers, Edition Peters, who offered some 3,000 Marks for works including a second piano concerto (which was never completed), the Cello Sonata and a second set of the Lyric Pieces. The Cello Sonata was the first of the bunch to be completed and was dedicated to the composer’s cellist brother, John. The first performance took place in his publisher’s home city of Leipzig, on 27 October 1883, with John Grieg’s teacher, Julius Klengel on cello and the composer at the piano.

The opening of the sonata is a rather tense affair, exhibiting, for Grieg, an uncharacteristically intense first theme, introduced by the cello. The delectable second theme is more like Grieg as we know him from the songs and miniatures—warm and golden. The cello is unusually given a minor concerto-like cadenza and the coda echoes the opening of the composer’s Piano Concerto, much as Rachmaninov’s own Cello Sonata reprises parts of his Second Piano Concerto. The second movement, a soft Andante, takes its lead from Grieg’s incidental music to the play Sigurd Jorsalfar, a storm scene interrupting the quietude before the main theme returns to reaffirm its serenity. The Finale is introduced by another short cello cadenza, whereupon we are led into a sometimes merry and occasionally darker-hued dance that is reminiscent of Grieg’s beloved Lyric Pieces in its folk-like nature, pathos, vigour and exuberance.