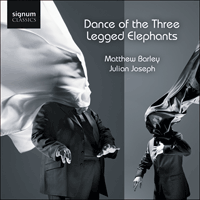 Dance of the three-legged elephants

Dazzling yet intimate, this set of tracks is the work of two brilliant and internationally renowned musicians who are also close friends, and their friendship pours from the music with passion, intensity, humour and inspiring energy. The central focus here is ‘collaboration’—the musical collaboration of Barley and Joseph and the traditions from which they have individually evolved, and their combined collaboration with other composers in a series of imaginative arrangements.

'It’s a worthy Recording of the Month' (MusicWeb International)» More

Dazzling yet intimate, this set of tracks is the work of two brilliant and internationally renowned musicians who are also close friends, and their friendship pours from the music with passion, intensity, humour and inspiring energy. The central focus here is ‘collaboration’—the musical collaboration of Barley and Joseph and the traditions from which they have individually evolved, and their combined collaboration with other composers in a series of imaginative arrangements. Matthew Barley’s influences are initially classical, but have broadened into world music, Indian music and electronic music; with Julian Joseph the influences again have a strong classical heart but we know him primarily as a jazz performer and composer. But the classical performer and the jazz practitioner are searching for the same thing—as Joseph puts it ‘improvisation is pulling magic out of the air’—so that through their playing music together, and challenging each others’ musical experience they end up blurring boundaries which, as Barley says, ‘never really existed’ between genres and people. We are transported through music which at times echoes the romantic harmonies of the European tradition, then again the latin rhythms of South America, then blues and swing, and then something very modern and avant-garde. These myriad tones, textures, feels, grooves and emotions hold together in a fabulous aural tapestry, at times freely improvised and at other times more arranged or composed, as is the jazz tradition. The ways in which these performers draw classical and jazz together is literally infinite and is proof of how jazz, once an outsider to classical music, has been absorbed; indeed you could argue that it is actually the other way round, and the classical colours and sensibilities become merely aspects of the improvising force. Or maybe that would be to suggest boundaries that do not, or should not exist … Anyway, the great jazz artist Miles Davis (celebrated on this CD in the John McLaughlin track Miles beyond), would have been thrilled to hear Barley and Joseph working so freely in and out of their traditions, because for Davis, to perform jazz was never to stand still, but always to be moving forward and challenging expectation, absorbing new influences and creating great music.

In the main these tracks follow a traditional jazz concept of episodes. There is often a presentation of the tune or ‘head’ which is pre-arranged, followed by solo sequences where one instrument is to the fore and the music is more improvised. This ‘conversation’ between musical personalities takes many textural forms, so for example in [Used to be a] Cha Cha—originally a Herbie Hancock/Jaco Pastorius classic—the piano keeps the left hand ostinato patterns moving as the cello soars above before the performers swap round and the cello takes the ostinato, or in Dance of the three-legged elephants, where the cello produces a pizzicato walking bass over-which the piano plays fast jazz lines before the textures are again reversed.

There are three Improvisations providing links to more composed sections. The first, Improvisation No 7 provides a mood setting introduction to the CD as a whole, exposing some of the fundamental elements of the duo sound. Thus we hear bass ostinato in a ‘walking’ jazz style, chords, melody, pedal-points and a soft lyrical line, elements which will be elaborated in subsequent sections. The second, Improvisation No 3 has a Satie-esque chord pattern in G minor over which the cello weaves lyrical lines with semi-tonal figures and grace notes. There is an intoxicating move to E flat in the chord sequence, and piano and cello each have solo sections working over the ‘changes’ (repeating chord patterns). The final improvisation (No 2) makes use of effects including pizzicato and tapping on the bodies of the instruments, which build up a vivid and engaging rhythmic tapestry. This improvisation allows cello and piano free rein of their technical and harmonic skills.

There are three original Julian Joseph compositions featured on the CD. Castellain sunshine opens with high piano chords, cello pizzicato and piano effects (such as strumming the strings). This track has a latent latin feel and combines episodes of intense rhythmic conversation with heartfelt lyricism in the melancholic E flat minor main melody. And no record which has jazz at its heart would be complete without a blues—that iconic jazz sequence, highly flexible and malleable, and wonderful to improvise over—and it is provided here in Joseph’s witty Dance of the three-legged elephants. In 3/4 time the chord sequence is a classic 12 bar form, with a defining riff featuring a strong minor second and third. There is some great high glissando work in this track and fabulous jazz lines from the piano. The third Joseph contribution Vika, originally written for Barley’s wife, Russian violinist Viktoria Mullova, is a gorgeous, expansive melody with an 8/8 latin feel pulsing beneath. There is something yearningly European in the passionate cello tune, as well as echoes of Chick Corea in the harmonies and piano lines of the solo section—once again the musical influences meld effortlessly, and as a track builds the energetically flowing jazz piano fully demonstrates Joseph’s mastery of the modern jazz style.

Four other tracks are based on the work of other composers. [Used to be a] Cha Cha is a Jaco Pastorius number, and Joseph says of the Weather Report original that the improvising is ‘unsurpassable’ and so the aim here was to break this down and re-build it in the duo’s own way. So this is homage to the original track, and it’s wonderfully executed, setting up the latin ostinato in piano left hand with the melody played in unison above. As the music breaks down there are more complex rhythms and effects—whole tone harmony—with more contrapuntal and fugal elements that take the work very much into the ownership of Joseph and Barley. At the end of the track the laughter is just what we the listeners have sensed—devilish fun enjoyed by two brilliant musical personalities.

The beautiful arrangement of Antônio Carlos Jobim’s Sabia is one of the simplest arrangements on the CD, with wonderful lyrical playing from Matthew Barley underpinned with a laid-back latin groove. There is less focus here on improvisation, but rather on interactive playing and interpretation of the harmony.

Joseph describes the inclusion of Ravel’s Pièce en forme de habenera as ‘completing the picture’ of the relationship on this disc between the classical sensibility and the improvised jazz response. Ravel, who absorbed the habanera music as a folk style and breathed into it a classical framework in his original, in turn provides Barley and Joseph with a starting point for this contemplative response. There’s no denying either the debt 20th Century Jazz musicians owe to Ravel in terms of pan harmonies and whole tone colours—used to great effect here.

And the inclusion of Miles beyond is fitting on a disc that is so much about fusions and collaboration. British jazz/rock guitarist John McLaughlin played with Miles Davis during the 1970s when Davis was experimenting with jazz/rock fusion. Davis was a great icon of jazz experimentation from the early period of his ground-breaking ‘Kind of Blue’ album in the 1950s all the way through free jazz, rock and into the 1970s pop fusion movement. The McLaughlin original pays homage to Davis with a kind of be-bop melody juxtaposed with the block chord harmonies of heavy rock, and this is the starting point of a very free improvisation which includes cello and piano effects and complex rhythmic development as well as, once again, giving us a strong sense of that bedrock sound of jazz improvisation—the blues. Miles Davis would have raised a smile …