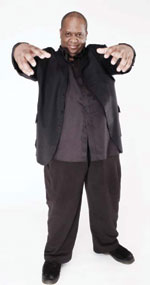 Virtuoso pianist, bandleader, composer, arranger and broadcaster, Julian Joseph has been a leading figure on the international jazz scene for over two decades. Acclaimed by critics and audiences the world over, he never fails to inspire with his mastery of the keyboard, the versatility of his musicianship, and the seemingly limitless scope of his creative imagination.

Julian’s musical ideas reflect the eclectic influence of all forms of music in the history of jazz: from classical to rock and pop, everything is relevant. A feature of a Julian Joseph concert is the wide-ranging repertoire of original compositions and arrangements upon which he draws. Challenging and innovative, they are deeply rooted in the jazz tradition and, as with all great jazz music, combine his own unique voice with those of his predecessors.

Julian is completely at home on any stage and in front of any band, whether performing solo, or leading his own trio, quartet, electric band or big band, or with full symphony orchestra. His passion for the music is always palpable, and his desire to communicate that passion compelling.

As well as four albums and a mass of original material for small band, Julian has written a number of large-scale works for big band and symphony orchestra, including The Great Sage for big band and strings premiered at the 2002 London Jazz Festival, Mountain of Hope, The Reverend: Back Home to Glory, A Ballade of Love, Guardian Angel, and an arrangement of Gershwin’s Rhapsody in Blue for big band, premiered at the 2003 City of London Festival. Two movements of a 5-movement suite for orchestra, Symphonic Story: The Great Exception, have been performed by the Halle and BBC Concert orchestras. In 2007 Julian premiered and toured his new jazz opera, Bridgetower: A Fable of 1807—the story of young black violin prodigy George Bridgetower in London at the turn of the 19th Century.