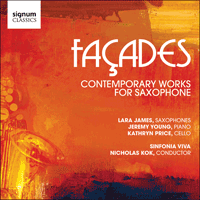 Accompanied by a select group of musicians including Sinfonia ViVA, Lara James, the renowned saxophonist, performs contemporary works by some of today’s leading composers, demonstrating the unique timbre and versatility of the modern saxophone.

'The saxophone is in, and there's no better performer than Lara James. From shades of jazz to thrilling expressionism, this recital earns your attention' (Classic FM)

Lessons of the sky (Rodney Rogers)
The title Lessons of the sky comes from the essay The Star Thrower by Loren Eiseley (found in a collection of essays under the same title). Here, the sky represents that which is open, alive and infinite. ‘Lessons’ suggests the knowledge gained through observation of the world around and above us—the endlessly varied designs that nature provides as building blocks for life.

The music is based on short motives and chord progressions that are continually varied and juxtaposed. There are three sections in the composition, forming a fast/slow/fast structure. While sections one and three emphasize patterns that are fast and rhythmic—with no variation in speed—the rate at which chord changes occur varies widely. Early in the piece the harmonies move quickly underneath the many motives; but as the first section progresses, a single motive/pattern is periodically isolated and repeated over very slow chord changes. The surface rhythm of the pattern remains fast and constant during these harmonically stable sections, yet there is a general perception that the music is calmer.

The interplay between the soprano saxophone and piano is another important aspect of the piece. The two instruments tend to share ideas, tossing motives back and forth in an improvised manner, but in the lyric slow section the soprano saxophone is featured and the piano takes on an accompanying role. Occasionally the piano makes an unexpected percussive sound when the pianist dampens a string with fingers of the left hand whilst playing the keyboard with the right hand. A single low piano note is dampened throughout the entire composition with a rubber wedge (which, when struck softly during the slow middle section, takes on a gong-like character). The piece closes with a return of the fast music, beginning with harmonically stable repeating figures and then moving into the short and quickly juxtaposed motives that began the piece. This loosely designed reverse order results in an arch-like shape for the whole composition.
(Rodney Rogers)

Sonata Op 29 (Robert Muczynski)
A well-known work in the saxophone repertory, this Sonata was written in 1970 and dedicated to saxophonist Trent Kynaston. It comprises two movements: I. Andante maestoso, and II. Allegro energico.

Muczynski’s compositional style is characterised by distinctive motives and texture. Melodic lines in the Sonata are strong, and express mood and atmosphere through undulating dynamic use of tonal range, warm expression and dark, brooding lyricism. His typically rhythmic and percussive writing in the second movement frequently exploits irregular meter to great effect, which, combined with his artful use of both dynamic contrast and the saxophone’s extended tonal range, creates great excitement and drive. His pieces are designed to highlight the artistry of the performer and remain sympathetic to the idiom of their particular instrument, while logical development and clarity of intention are traits of Muczynski’s concise and unpretentious writing.

Amongst his other works for wind instruments is his Concerto for Alto Saxophone and Chamber Orchestra Op 41 (1981), for which he received a Pulitzer Prize nomination.

Here again (Colin MacDonald)
Written in 1999 as a wedding anniversary gift for my dear friends Zeke and Nicki, this duo for soprano sax and cello marries the masculine and feminine aspects of both instruments. The soprano saxophone sings in the vocal range of the female voice, but has a masculine strength, while the cello sounds in a deep male vocal register, but is often regarded as a feminine instrument. The music attempts to share these qualities, winding the voices together in a marriage of melody and rhythm, and striving to find the balance of play that characterises a strong relationship.
(Colin MacDonald)

Façades (Philip Glass)
Façades was composed in 1981 and written for two saxophones or two flutes and strings. This music was originally intended as part of the score for Godfrey Reggio’s film Koyannisqatsi, which means ‘unbalanced life’ in the language of the Hopi Indians. The visual work it accompanied consisted of scenes from New York’s Wall Street on a Sunday morning, and without actors and dialogue, depicts a clash of cultures; of a technology driven city life and the balance of nature. Apocalyptic images of an empty New York show façades and skyscrapers in Manhattan’s deserted Wall Street district.

It was not used for the intended film, but has since become a staple of the live performances of the Philip Glass Ensemble and was included in Glasspieces, the production put on at the New York City Ballet in the spring of 1990, choreographed by Jerome Robbins.

Sonata, Op 56 (Christopher Painter)
This sonata was commissioned by Lara James and sets out to explore both the expressive and technical features of the instrument. The musical material of the three movements is constructed from arrays of notes, which are generated from an initial twelve note series and then divided into cells. These cells are then used to create motivic material that is used within, essentially, a tonal framework.

The first movement, Moderato, is toccata-like and full of nervous energy. The motives repeat and evolve in a continuous development as ideas are juxtaposed and combined.

The second movement, Lento flessible, is a languid nocturne with more than a passing nod to the saxophone’s “other life” in the jazz world. The mood of this nocturne is one of relaxed contemplation where all is right with the world. A suitable image might be of someone standing on the banks of the Seine at twilight, leaning against a bridge and watching the world go by.

The last movement, Allegro vivo, is a boisterous rondo with five alternating ritornelli and episodes which bring the work to a close.

This work was premiered by Lara James and Jeremy Young at the Royal Welsh College of Music & Drama at a concert supported by the Welsh Music Guild, in April 2005.
(Christopher Painter)