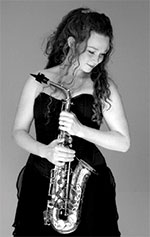 Lara James is a Welsh saxophonist based in the UK, known for her work as a collaborative musician and soloist. She has established herself as a musician with a busy and varied portfolio career ranging from recital, chamber, orchestral and band performances to lecturing, and performs across a variety of musical genres from contemporary classical to alternative.

She has performed as a concerto soloist and recitalist throughout the UK, while her freelance recording work includes sessions for radio, BBC TV and major label album release. She has made numerous appearances with orchestras, ensembles and opera companies including the BBC Philharmonic Orchestra, BBC NOW, Opera North, Liverpool Philharmonic Orchestra, Cape Town National Opera, Welsh National Opera and various others.

As a soloist Lara has been broadcast around the world; including in the UK (BBC Radio 3, Classic FM, Ireland’s RTE Lyric FM), the USA (NPR) and Australia (ABC Classic FM). Lara’s debut Jeremy Young was ‘Presenter’s Choice’ in Classic FM Magazine, May 2009, which stated; 'The saxophone is in, and there’s no better performer than Lara James. From shades of jazz to thrilling expressionism, this recital earns your attention.' Fanfare Magazine wrote; 'Lara James is an estimable, if not sensational, proponent of all these works… a sensitive collaborator… A well-known performer and teacher in her native Wales, she possesses a solid techniqueand sensitivity to the jazz idiom that allows her to create a sense of improvisation.'

A keen interest in the saxophone in chamber music contexts prompted Lara to found Triquetra, a saxophone, cello and piano trio with Kathryn Price and Rachel Ramos; and in summer 2010, she co-founded the saxophone quartet Resonance.

Born in Pembrokeshire, west Wales, Lara studied at the Royal Northern College of Music where she gained a degree and professional performance diploma. Lara then won a scholarship to the Manhattan School of Music where she studied with to the esteemed performer, musicologist and saxophone historian Dr. Paul Cohen. Following a period of study in the USA Lara went on to complete her Masters degree in musicology at the University of Manchester, where her specialist research area was ‘The Saxophone in Britain, c. 1860-1960’.

Lara James endorses Gonzalez Reeds and is a Gonzalez performing artist, and gratefully acknowledges the financial support of the Arts Council of Wales in assisting with the recording of this album.