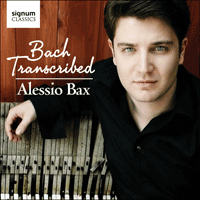 It is a sign of the brilliance of J.S. Bach that great pianists have chosen to recreate and reinterpret his works in so many ways. From Wilhelm Kempff’s subtle resetting of Wachet Auf to Ferruccio Busoni’s virtuosic grandeur in the Violin Partita Chaconne, these performances by star pianist Alessio Bax capture the reverence and resplendence of Bach’s music in thirteen great transcriptions. Alessio Bax is universally praised for his lyrical playing and insightful interpretations. On 23 April 2009 he was awarded the Avery Fischer Career Grant, presented once a year to talented instrumentalists who show great potential for solo careers, following in the footsteps of previous winners Joshua Bell, Hilary Hahn and Gil Shaham.

'Alessio Bax goes back to Bach for an unmissable album of transcriptions. In the realm of Romantic Bach transcriptions, Alessio Bax’s stylistic perception and palette of tone-colours have considerably deepened since his “Baroque Reflections” release (Warner, 11/04), together with a level of technical control that gives new meaning to the word “awesome”. Legato lines are full-bodied at all dynamic levels, while thick chords and rapid passagework betray not one speck of struggle. Furthermore, Bax retains tonal beauty and definition even in the loudest and most sonorous passages, achieved without the least banging … Signum’s roomy, lifelike sound perfectly complements Bax’s extraordinary pianism. An album no 'hyphenated Bach' fan should miss' (Gramophone)
'In short, this disc is a must' (Fanfare, USA)» More

Today it is remarkable to realize that there was a time when Bach was viewed as a respectable and learned rather than inspired composer, serious to a fault and designed for an essentially cold and academic taste. His children referred to him as ‘the old wig’ and it wasn’t until the nineteenth century that awareness of his true stature (aided by Mendelssohn’s enthusiasm) occurred. Only then did musicians become conscious of the unique depth and spiritual dimension of his all encompassing art, a small step towards seeing him as the true father of music. For many the 48 Preludes and Fugues remain the ‘Old Testament’ of music (with Beethoven’s 32 Piano Sonatas following as the New). Yet there is nothing of the old in so many of Bach’s boldly experimental works, in The Art of Fugue, the Goldberg Variations, the Gigue from the 6th English Suite, the Prelude and Fugue in A minor (described by Albert Schweitzer as ‘among the grandest things in keyboard literature’) and perhaps most of all the Prelude (fantasia) in A minor BWV922 (to take a random selection). Here Bach exhibits an improvisatory freedom and daring that gives his music a timeless veracity and lends some credence to András Schiff’s belief that ‘Bach is the most romantic of all composers.’

Delius may have scorned what he saw as Bach’s restriction and conservatism but others, more informed and less biased, have tirelessly celebrated what they undoubtedly saw as the foundation stone of great music. Several pianists, too, have placed Bach at the centre of their repertoires (Glenn Gould and Rosalyn Tureck, who early in her career forsook all others to concentrate exclusively on Bach) while many great Russian pianists (Tatiana Nikolayeva, Feinberg and Richter) rejoiced in music previously dismissed in their country as little more than useful examination fodder.

It is therefore hardly surprising that so many composers have wished to pay personal and often idiosyncratic tribute to Bach, ranging across the board from Liszt, Rachmaninov and Kabalevsky to Villa-Lobos (his exotic Bachianas Brasileiras) and including a wide variety of pianists and pianist-composers.

And this brings me to the question, when is a transcription a transcription? Liszt, to take a towering example, wrote 193 transcriptions. And these divide into ‘partitions’ (objective recreations where the chosen work is lifted bodily from one medium to another without undue elaboration or alteration of its intrinsic nature or character) and ‘paraphrase’ or more particularly ‘paraphrase de concert’ where the glory or triviality of the original is accentuated and concentrated by a dizzying form of précis; the accent as much on the recreator as the creator, on the arranger as well as the composer. Altruistic if self-promoting, all great transcribers are motivated by a desire to share their love of the great and less great usually in an age when the dissemination of music was difficult, when concerts were often inaccessible and records non-existent.

Leopold Godowsky (1870-1938), to take the first transcriber in Alessio Bax’s recital, was a pianist of legendary prowess capable, particularly in private, of achieving ultimate feats of pianistic brilliance reflected in his Strauss Paraphrases and his 53 Studies on Chopin’s 27 Studies, a delight in taking virtuosity to new undreamed of heights. Yet even here he confronts the inevitable brickbats that came his way, the accusation of tampering and gilding the lily or a ‘trading on sacred soil’ with a show of disarming candour and modesty. He wishes only to ‘probe hidden beauties’ believing that Bach would not have disapproved, in view of the amazing modernisms so frequently found in his compositions and considering his very free amendments to his own and other composer’s works. Indeed, for the ever-outrageous Kaikhosru Sorabji, Godowsky transcended Bach’s ‘dry, rattling skeletons of compositions’ investing them with a grandeur and richness beyond the originals. Alas, Godowsky would have felt slighted and insulted rather than praised by such a claim, particularly when it was his intention to approach with ‘awe and reverence the imperishable wonders of Bach.’ And here, in the First Violin Sonata, Godowsky achieves an extraordinary fusion of virtuosity and restraint. Single lines are embellished with all of his fullness and contrapuntal skill yet the result is never less than serious. Violinists will gasp in admiration or outrage while pianists will find themselves confronted by a mighty challenge, requiring rare agility and an acute ear for keeping so many multi-textures, layers and lines clear.

Alexander Siloti (1863-1945) was a pupil of Liszt, famous for his transcription of Bach’s E minor Prelude (or rather made famous by Emil Gilels who invariably offered it as a valedictory encore at the close of his recitals) and infamous for his scissors-and-paste job on Tchaikovsky’s Second Piano Concerto. And his way with the Air from the Orchestra Suite No 3 in D major, the Andante from the Violin Sonata No 2 in A minor and the Siciliano from the Flute Sonata in E flat major is altogether more effortless and transparent, aiming for simplicity rather than elaboration.

Wilhelm Kempff (1885-1991), a uniquely subtle pianist with a sonority all hiw own, also believes that Bach is best served by simplicity and, unlike his roseate and romantic transcription of, say, Handel’s G minor Minuet from his first Harpsichord Suite, he is memorably restrained in Zion hört die Wächter singen and so, too, is Alessio Bax himself in his arrangement of the Largo from the F minor Concerto.

Saint-Säens (1835-1921) brings a touch of French chic to Bach’s Gavotte (Tempo di Borea) from the Violin Partita No 1 in B minor, his vital and stylish transcription at the opposite pole to Bax’s final offering, the mighty Bach-Busoni Chaconne, a set of 29 variations on an eight bar theme taken form the D minor Partita for Solo Violin. Here, we return to virtuosity on the grandest scale and a reminder that for Busoni (1866-1924) the piano was the true King of Instruments.

It only remains for me to add a personal note. I first heard Alessio Bax as a jury member at the 1997 International Hamamatsu Piano Competition in Japan where he won first prize, preceding this by a first prize at Ferrol in Spain and yet another first at Leeds in 2000. His performances in Japan were of an astonishing brilliance and acuteness and never more so than in Granados’s Amor y la muerte (No 5 from the Goyescas) which I remember as if it was yesterday. And now this richly enterprising Bach transcription recital can only enhance his already formidable international standing and career.