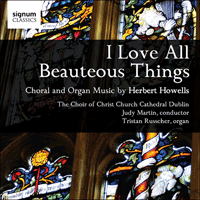 I love all beauteous things & other choral and organ music

'I Love all Beauteous Things' explores a great collection of works by the British Composer Herbert Howells, featuring performances of some of his lesser-known choral and organ music.

The Choir of Christ Church Cathedral, Dublin have had a long and prosperous history: they were recorded as having taken part in the first performance of Handel's 'Messiah' in 1742. Since 1972 the new mixed voice choir, lead by Judy Martin, has been highly active with concerts tours and regular broadcasts for the RTÉ And BBC, as well as continuing worship in the cathedral.

'This Mass is quintessential Howells and the beauty of the vocal lines come through clearly on this recording … a welcome addition to the recorded works of Howells both on account of the repertoire it covers and because of it's fine performances' (Musical Criticism.com)» More

'For the second time this month I've been left dumbstruck by a Dublin choir, this one to be heard at Christ Church Cathedral, under the direction of Judy Martin. They somehow manage to rid Herbert Howell (1892-1983) of his faintly astringent English churchiness and find the love between the lines of his hymns. There are moments here that Messiaen would have envied' (Scena, Canada)

Herbert Howells (1892-1983) has an assured place in the annals of English church music. That a composer of his stature should write so much for the church is quite unique in the history of twentieth century British music. However his popular reputation is founded largely on the frequent performance of a small body of core works. This recording redresses the balance in exploring some much less well-known pieces, including one premiere recording.

Thee will I love
Taking words from Robert Bridges’ own ‘Yattendon Hymnal’, Thee will I love, my God and King, was Howells response to a commission for a work to commemorate the 1100th anniversary of the massacre of the monks of the Abbey of Medehamstede in 870 AD. The Abbey became Peterborough Cathedral, and this motet was composed for a Solemn Requiem, sung in the Cathedral on 9 November 1970 by the Cathedral Choir under Stanley Vann. The setting makes much use of the opening four note quaver motif in various guises, and with an extraordinary variety of harmonic colouring, expressing much of the devotional quality of the words, but also alluding perhaps in harmonic ambiguity and dissonance, to the anguish of the event being commemorated. A typical Howells’ ‘fingerprint’ is the delaying for as long as possible the resolution to any sort of harmonic repose, by colouring the tonic chord with its most unstable relation, the augmented fourth.

Hills of the North, rejoice
Back in 1937, in his study at St Paul’s Girls’ School where he was Director of Music, Howells sketched an outline tune for Charles Edward Oakley’s Advent hymn, Hills of the north, rejoice. Nothing came of that as a hymn, but when forty years later in 1977, he was asked for an anthem to celebrate the centenary of another girls’ school, Clifton High School, Bristol, he took that outline and expanded it into what the editor Barry Rose calls this ‘virtuoso tour-de-force for upper-voice choirs’. It is an exciting and exhilarating setting of these well-known words, another example of Howells’ last burst of creative power, a composer in complete command of his technique. After the first performance which Howells attended in Bristol Cathedral, he wrote that the 68 strong school choir ‘sang it as if they loved it!’.

I love all beauteous things
1977 was effectively the last year of Howells creative life and is certainly the last in which he brought anything to completion. But what a vintage year it was, not only including this exquisite setting of Robert Bridges’ words, but also Hills of the North, rejoice, also on this CD. I love all beauteous things, was commissioned by the Cathedral and Abbey Church of St Albans for the ‘Festalban’ festival in that year and was sung in conjunction with the ‘Hands of the Craftsman’ exhibition at the Cathedral. In the context of twentieth century church music, no finer craftsman than Howells could have been chosen, and no more able creator of ‘beauteous things’ for choirs and organists. Howells in his quietly ecstatic response to this text, seems to articulate his own artistic credo in this music: ‘I love all beauteous things, I seek and adore them…I too will something make, and joy in the making’.

Missa Aedis Christi
Howells composed this mass for the choir of Christ Church Cathedral, Oxford. The Latin title translates as ‘Mass of the House of Christ’ and so it is appropriate that it should be included in this recording by the choir of that cathedral’s namesake in Dublin. The text, with the exception of the opening Kyrie, is that of the Book of Common Prayer service of Holy Communion. The Mass was finished in 1958 and received its first performance in February 1962 at a liturgical celebration in Oxford when the choir was directed by Dr Sydney Watson. The late 1950s were the years in which Howells’ post-war career as a composer of church music really took off, and the music that he wrote at this time shows him at the height of his powers as a master of line, of counterpoint, of texture and of softly dissonant, sensuous harmony achieved as a result of all these elements. In listening to this music, the worshippers (or their secular counterparts) are surrounded by a sensual, impressionist waft of sound that transports and enhances the spirituality it so admirably serves.

Six Short Pieces for organ
Over the course of his career Howells composed a body of significant and substantial works for organ, the instrument on which as a young man he began his preparation for a life in music as an articled pupil of Herbert Brewer at Gloucester Cathedral. These include the early Sonata No 1, part of the portfolio of compositions that gained Howell his scholarship at the Royal College of Music in 1912, and he was still composing for the instrument in old age. The Partita of 1971 was written for Edward Heath when he became Prime Minister and among the last works contemplated by Howells but never written, was a fifth Rhapsody to add to the four he had already contributed to the repertoire. Among his papers and manuscripts there are a number of references to a set of ‘six short pieces’ and it is clear that he worked on such a set from time to time. Following the composer’s death in 1983, Robin Wells took six of the more substantial sketches and drafts from among many deposited in the library of the Royal College of Music, and edited and completed them for publication, with the aim of making an addition to Howells’ works for organ that would increase our appreciation of this aspect of his output and also give access to music that is less technically demanding than some of the larger pieces.

The idea of a set of short pieces seems to have arisen in the composer’s mind from his return to active involvement in church music during the Second World War when he acted as Organist of St John’s College, Cambridge, deputising for Robin Orr, then on active service. Howells was completing the much more substantial Six Pieces for Organ at this time and had been asked by the BBC for a set of short pieces that he might broadcast from the College towards the end of his time there. In the event, this project came to nothing, and Howells never finished the pieces, but he did eventually work up the last sketch as ‘Epilogue’, his contribution to the ‘Hovingham Sketches’, a compilation of eleven pieces by British composers, presented to the Duchess of Kent in 1974. Two of the other unfinished movements were edited by Wells as ‘Tranquillo ma con moto’ and ‘Allegro impetuoso’ for the present set, together with four more unconnected fragments to form the other pieces, ‘Allegro Scherzando’, ‘Aria’, ‘Chorale’, and ‘Quasi lento: teneramente’. During his time at St John’s, Howells gained a reputation as an improviser, and it was said that in his service voluntaries, he never played a note of printed music. Perhaps these pieces preserve a few precious examples of the way his musical mind may have worked on these occasions.

Hymns
Howells composed a small number of hymn tunes for congregational use. However few of them have been published in mainstream hymnals and only Michael (All my hope on God is founded) has become well-known. The two examples recorded here date from the 1960s. Sancta civitas (O Holy city, seen of John, words by W Russell Bowie) was one of three tunes commissioned in 1962 for ‘Hymns for Church and School’, and In manus tuas (This world, my God, is held within your hand, words by Hamish Swanston) was one of a pair that Howells wrote in 1968 for ‘The New Catholic Hymnal’.

Haec dies
Haec dies was the last in a series of Latin motets that Howells wrote at the behest of Richard Terry for the choir of Westminster Roman Catholic Cathedral. Terry built up the choir in the early years of the twentieth century, and through his work in editing the manuscripts of Tudor composers, rediscovered a rich repertoire of unaccompanied liturgical music. Terry was also keen to encourage modern composers, including Howells, to write in a liturgical idiom. This Easter motet was first heard in the Cathedral on Easter Day, 1918.

A Maid peerless
This lovely setting of a medieval poem in praise of the Blessed Virgin Mary has a long history. In its published form it dates from 1951 and was ostensibly written for the National Federation of Music Festival’s competition for choirs that was held as part of the Festival of Britain celebrations. However this was but a revision of an earlier setting for upper voices and small orchestra composed in 1931. There may be a Scottish connection as the manuscript of the earlier version lay undisturbed for many years in the library of the Royal Scottish Academy of Music and Drama in Glasgow, but there is no evidence of any performance either north or south of the border. This is another response to a text in which through the lilting grace of its rhythms and the bittersweet richness of its harmony, Howells’ mastery of mood and word-painting is effortlessly demonstrated.

Sweetest of sweets
Sweetest of sweets, together with a setting of another poem by George Herbert, ‘Antiphon’, were composed in the early 1970s at the suggestion of Sir David Willcocks and were first sung by the Bach Choir in 1977. This unaccompanied motet is written in Howells’ most advanced harmonic idiom, characterised by sinuously interweaving chromatic vocal lines that come together in exquisitely complex and dissonant harmonies, yet without ever losing a sure sense of the music’s forward momentum, and often coalescing in surprising common chords. The setting’s climax (‘But if I travel in your companie’) and its culmination on a soft affirming chord of F sharp major, are heart-warming and life-enhancing.