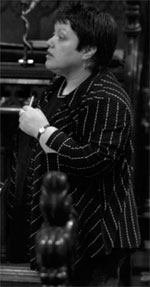 see also Judy Martin (alto)
Judy was organ scholar of Selwyn College, Cambridge between 1986 and 1989, where she studied conducting under Dr Andrew V. Jones. On graduating, she worked as an organist and conductor with posts at Exeter College, The Queen’s College and Christ Church Cathedral in Oxford. At this time, she founded the nine-voice professional vocal ensemble, Voces Sacrae, a group she continues to direct. Voces Sacrae has recorded for BBC Radios 2, 3 and 4 and on national television in Australia, and has performed at venues both at home and abroad. The group has recorded seven compact discs, most of which feature first recordings of contemporary sacred music, including the music of Michael Finnissy, Gabriel Jackson, Michael Berkeley, Edmund Rubbra, Bob Chilcott and Magnus Williamson.

In 1991 Judy spent six months in Sydney, as part of the Music Department at Christchurch St Laurence, conducting, teaching and playing the organ. She also holds a PGCE (Secondary) Music qualification and in 1995, after two years of teaching, she was appointed Head of Music at The Abbey School, Reading, UK. Having relinquished this post in order to pursue a career as a conductor and teacher, Judy co-founded the professional eight-voice choir at the church of St Mary Magdalen in Oxford, with whom she performed and recorded regularly in association with Oxford University Press, promoting contemporary choral repertoire. In 2001, she was appointed Director of Chapel Music at Worcester College, Oxford, where, in addition to maintaining the college’s chapel choir of men and boys, she also founded a new mixed choir which rapidly gained an excellent reputation both within the university and further afield.

Judy is actively involved with Royal School of Church Music choirs and courses. She was, until recently, Assistant Director of the RSCM Southern Cathedral Singers. She has also been a tutor of the RSCM Millennium Youth Choir, which performed in London’s Millennium Dome on New Year’s Eve 1999. She was awarded an honorary ARSCM in 2006.

Judy was appointed to the post of Director of Music at Christ Church Cathedral, Dublin in 2003. Her work there centres on the provision of music for the five choral services held in the cathedral each week during term time. She maintains a high profile in the musical life of the city and is in demand as an adjudicator for choral competitions both in Dublin and in the UK. She directs both the cathedral choir and the cathedral girls’ choir. This work, together with her enthusiasm for the promotion of contemporary choral music, maintains the educational ethos which has been part of the life of the Cathedral for the past 500 years.