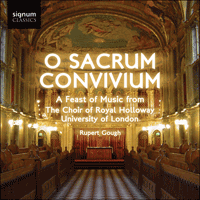 Choral music from the sixteenth-century, right up to the late-twentieth-century features on this beautiful eleven-track album, with stunning performances from The Choir of Royal Holloway.

The Chapel Choir was established in 1886 for women’s voices & became a mixed choir in 1965. Forty-three years on and the choir have made 14 album recordings & have toured most European countries, under the guidance of Rupert Gough, who began his musical training as a chorister at the Chapel Royal, St James’s Palace.

'Here is a choir of 23 young singers, fresh of tone and fresh of mind, careful and accurate over their notes yet giving the impression that it all comes naturally … they blend perfectly, they shade sensitively, they appear to work with like mind towards an agreed ideal of choral sound' (Gramophone)
'This disc is enjoyable, with a good range of old favourites and a number of pieces that deserve to be more widely sung' (Choir & Organ)» More

Cibavit eos
William Byrd is probably the most celebrated of all the English Renaissance composers. His four-voice motet Cibavit eos is a setting of the Proper for the Feast of Corpus Christi. It was printed by Thomas East in 1605 in the first volume of Byrd’s Gradualia—a publication initially banned in England under penalty of imprisonment, as was most of Byrd’s Latin Catholic music.

O magnum mysterium
Although born in Spain, Victoria spent many years in Rome, where he was ordained priest in 1575, before returning to his homeland in 1587 to serve as chaplain to the sister of Philip II. In his early life in Rome, Victoria had studied at the Jesuit Collegio Germanico where he acted as a choral scholar. It is during this period that Victoria composed the four-part motet O magnum mysterium, which was then published in 1572. With its graceful contrapuntal lines, it displays the influence of Palestrina, who was Maestro di Cappella of the nearby Seminario Romano. Victoria’s setting captures the subtle awe and wonder present in this traditional Christmas text.

Alleluia, I heard a voice
Thomas Weelkes’ place in English church music history is often somewhat overshadowed by the prolific output of two other great English church composers—William Byrd and Thomas Tallis. He was very much at the peak of his creative powers when he died, prematurely, in his forties. Like Purcell after him, he had a vivid imagination and a love of experiment, and nowhere is this more evident than in his four sets of madrigals, which appeared between 1597 and 1608. Arguably, it is with these madrigals that the English madrigal school reached its peak.

Weelkes published no further madrigals after 1608, and instead devoted himself to the production of a large quantity of church music, probably for use at Chichester Cathedral, despite the fact that he was constantly in trouble with the church authorities. Alleluia, I heard a voice is unified by recurring musical and verbal material, a device which the composer had earlier explored and developed through his madrigals.

When David heard
In the intervening period between Weelkes’ output of largely secular madrigals and the church anthems that were to follow, he wrote two remarkable sacred madrigals, O Jonathan and When David heard, which were published in 1622. Here Weelkes explores the depths of grief and emotion inherent in King David’s lament over the death of his son (2 Samuel 18:33). The striking textural contrasts, yearning rising phrases, and rich six-part scoring capture these intense emotions. At the end, the subtle shift from minor to major tonality lends an air of acceptance. It is, therefore, perhaps interesting to note that the composer dedicated this anthem to his friend, the poet-priest, Thomas Myriell, who included it in the 1616 manuscript anthology of church music he called Tristitiae remedium—‘a cure for sadness’.

Magnificat
Arvo Pärt was born in Estonia but moved to Berlin in 1980 following much frustration with the Soviet regime. In the 1970s he reinvented himself with a new musical style based on simplicity. The composer discovered “that it is enough when a single note is beautifully played. This one note, or a silent beat, or a moment of silence, comforts me. I work with very few elements—with one voice, two voices. I build with primitive materials—with the triad, with one specific tonality. The three notes of a triad are like bells and that is why I call it tintinnabulation”. It is certainly true that Pärt is indeed able to deliver intense, direct, and sometimes sensual emotion with the barest and simplest of materials—perhaps analogous to the Norman and early-Gothic church architecture for which he exhibits such affinity. Much of Pärt’s writing has been for choral forces, and the Magnificat, for unaccompanied chorus, dates from 1989. It was immediately popular with choirs around the world, and remains so.

Nunc dimittis
Holst wrote this Latin setting of the Song of Simeon for Richard Terry and The Choir of Westminster Cathedral, where it was first performed on Easter Day in 1915. It was then largely forgotten and the manuscript even lost. Holst’s daughter, Imogen, reconstructed the work for its first concert performance in 1974. No doubt inspired by Terry’s introduction of Renaissance polyphony into the repertory of what was then a new cathedral, Holst nods toward the music of Gabrieli and Palestrina with this richly-scored setting for unaccompanied eight-part chorus.

O sacrum convivium
Gabriel Jackson began his musical training as a chorister at Canterbury Cathedral and later studied composition at the Royal College of Music. His music is now widely recorded, and regularly performed and broadcast around the world. Many of his pieces reflect an interest in mediaeval techniques and ideas, and are made of simple melodies, chords, drones, and ostinatos. The composer says, “I try to write music that is clean and clear in line, texture, and structure… [My pieces] are not about conflict and resolution; even when animated, they are essentially contemplative. I like repetition and ‘ritualised’ structures”.

O sacrum convivium was commissioned (with funds provided by South East Arts) by Andrew Millington, then organist of Guildford Cathedral, for the 1990 Guildford and Portsmouth Cathedrals’ Festival. As the piece was to be sung by the combined forces of two cathedral choirs, Jackson decided to take advantage of the potentially massive resultant sonority by dividing the score, at some moments, into ten parts. The piece is predominantly quiet and meditative, with a refulgent climax at ‘et futurae gloriae’. O sacrum convivium is dedicated to the composer’s father, who was at that time a clergyman in the Guildford diocese.

Christus factus est
The unaccompanied choral pieces of Bruckner are remarkable for their combination of older techniques (at a time when Romanticism threatened their survival) with very striking modulations and extremes of colourful dynamics. The Gradual Christus factus est is used as part of the Mass on Maundy Thursday during Holy Week, and its text comes from Philippians 2: 8-9. This is Bruckner’s third setting of the text, completed in 1884 just after his Seventh Symphony and Te Deum. It was dedicated to Father Otto Loidol of the Benedictine Monastery of Kremsmünster, who was also the dedicatee of Locus iste some 15 years earlier. Christus factus est is perhaps the most symphonic of his motets, and a prime example of the way that Bruckner gradually develops harmonic tension, building to memorable climaxes before returning to stillness and quietness.

Nunc dimittis in B flat
The Irish-born composer Charles Wood studied at Gonville and Caius College, Cambridge, which is where he then spent the majority of his working life. Chiefly known for his Anglican Church music, he is often overshadowed by his friend and colleague Charles Villiers Stanford. Wood wrote a number of evening canticle settings in both English and Latin. This Nunc dimittis in B flat dates from the late 1920s, and was published alongside another unaccompanied Nunc dimittis (in C), provided with both Latin and English texts by the composer.

As the apple tree
Robert Walker’s musical education began as a chorister at St. Matthew’s, Northampton—a church with a long history of commissions from such composers as Britten, Tippett, and Finzi. He studied at Cambridge and was, for a time, Professor of Composition at the London College of Music, before emigrating to Thailand. The short anthem As the apple tree dates from 1982 when it was written for the marriage of Walker’s nephew. The setting of words from the Song of Songs is dedicated, “To my father, who only likes the black notes”. The undulating and long melismatic phrases of both choir and organ give the effect of a tree swaying in the breeze and this impression is heightened towards the end where Walker resorts to an aleatoric effect—each voice singing the main theme freely in a hushed murmur.

Ye choirs of new Jerusalem
The mediaeval chorus Chorus novae Jerusalem was written by the eleventh-century Bishop of Chartres, St. Fulbert. The hymn was used in England during his lifetime, and became one of the office hymns in the Sarum, York, and Hereford breviaries for the Sundays after Easter. It was translated from the Sarum Breviary in the late 1840s by Robert Campbell (1814-68) and first appeared in his Hymns and Anthems (1850). The hymn takes the theme of Christ as the deliverer of the prisoners from hell, alluded to in the hymn of praise in Revelation 5. Stanford’s vivacious and celebratory anthem speaks of the new Jerusalem chorusing the paschal victory of Jesus Christ in ‘strains of holy joy’.