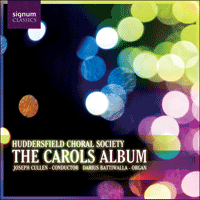 Following their highly successful releases on Signum (the Hymns Album and Handel’s Messiah conducted by Sir Charles Mackerras) the Huddersfield Choral Society is back in force with a magnificent collection of Christmas carols. This album will be a perfect Christmas gift or glorious self-indulgence, absorbing the sacred and profane alike, beautifully performed and recorded for the festive season.

Undoubtedly the hardiest annual of the entire musical repertory, the carol, in one form or another, has held its own against the twin ravages of time and taste, out-witting the fickleness of fashion and fad down the ages through its remarkable mutability. The simple nature of the carol allowed it to absorb the cross-currents and reflections of religious observance and popular pickiness, giving it a peculiar freedom to be turned into either devotion or diversion for both the religiously inclined or the die-hard holyday reveller. There are very few musical numbers that are still routinely sung, year in and year out, in the most solemn of cathedrals, shabby street corners, grand villas, humble homes, austere churches and rough-and-tumble bars the world over.

The merest glimpse into the history of the carol propels us into a bewilderingly long and complex affair, spanning more than just the couple of thousand years since the birth of Jesus Christ and its advent. This is a story of ancient texts meeting a suitable musical setting and often changing their tune down the years on finding a more melodic partner. Or the text may change and find itself in the company of several suitors for the same tune. In medieval times, for example, bawdy, and all too popular, songs were appropriated by clerics who would then apply a new text to the well-known tune in order that a beautiful melody may be returned to God—a by-product presumably being to rob the Devil of the best tunes. It’s certain that we were also robbed of a good few drinking songs in the process. The carol’s strength lies in its Darwinian ability to absorb and adapt to the sacred and profane alike.

Despite the carol being indelibly linked for us with the Christmas story and surrounding events, its origins have been traced back to pre-Christian times. Our very own twelve days of Christmas are themselves rooted in the Roman festival known as Saturnalia, after which twelve days of holiday ensued—including the giving of gifts, amongst other prefigurations. The Norse may have taken their own twelve-day fest, Yule, from the Romans. Much like the hanging of boughs of mistletoe and holly, the fuss made over the Christmas tree, the burning of the Yule log and the primacy of both preserved and freshly slaughtered celebratory foods, the carol had its place in ancient custom, most likely as a round dance in honour of gods, good food, the gradual lightening of the days and momentary fun.

Old favourites, such as The holly and the ivy, are not quite as innocent, celebratory dance-pieces as they seem. Often, layers of imagery are over-written, re-imagined, even spin-doctored into whole new meanings. So, Holly was a mainstay of Saturnalia festivals and Ivy dedicated to the Roman god Bacchus, for its qualities in preventing drunkenness. Both were mainstays of druidic culture, along with an old favourite, mistletoe. The carol also harks back to an older male-female contest, with the metaphorically ‘poisonous’ ivy being trumped by the powerful holly as the natural master of the sexes. But the Middle Ages also spinned into invoking the holly as a crown of thorns adorning Jesus of Nazareth’s head and ivy typifying everlasting life through its perennial green. And so it goes. The tune and text we know today was notated by folksong collector Cecil Sharp from an old woman in Gloucestershire only about a century ago and published in 1911, thus making it, in recent terminology, merely folk music.

Although carols have been associated down the ages with ancient festivals, the changing of the seasons and other important annual festivals, it was Christianity that seriously went about the business of re-structuring, re-formation and standardising of the carol into both a secular and sacred celebration of the Holy Trinity and the Virgin Mary, largely by incorporating or over-painting known local rites in order to prevail. Like the yew tree in many a churchyard, the carol takes on a new life with a new, Christian father, the baby Jesus and his adored mother.

The Virgin has had her ups and downs over the years. Fervently adored during the Middle Ages, it took the most esteemed church authorities to curb the massive amounts of humble songs, hymns, motets and other sacred pieces dedicated to her sanctity. Still, the Ave Maria remains one of the most widely sung and set texts in history. From early plainchant through the Renaissance, Haydn, Mozart, Gounod and co. to modern-day folk metal bands like In Extremo and operatically inclined groups such as Il Divo, the song remains the same—a divine incantation, newly wrought on this collection by Simon Lindley. Gaudete, which also celebrates Mary, was memorably revived through Steeleye Span’s pop hit which relives the original chant-like melody, sung here by Huddersfield’s incomparable Choral Society.

Texts to which we rarely give a though nowadays are steeped in very early Christian thought. I saw three ships is a case in point, despite being a great favourite at children’s carol concerts. The third verse ought to be a magnet for Da Vinci Code theorists (‘And what was in those ships all three’…’Our Saviour Christ and His lady’), but the whole is thought, disappointingly for some, to hark back merely to the relics of the three kings being guided toward the recently Christian Constantinople in the Fourth Century as ancient and holy remains, and consequently a means of spreading the word.

While the Sussex Carol is a relatively recent, and remarkably effective song, the Coventry Carol has the delectable and disturbing baggage of another ancient custom—the mystery play. The Pageant of the Shearman and Tailor’s Guild was evidently an annual event in Coventry in the Sixteenth Century and included this haunting piece, almost an anti-carol, a dark sabbath, softly detailing Matthew’s gospel version of the Slaughter of the Innocents.

Local events, such as mystery plays and processions afforded great succour to the carol. But that same localism and its secular—sacred flux through the centuries have made it ripe for censure and re-definition. The more remarkable then that some of these entities are still with us in that same middle-ground we still recognise and rejoice in.

The re-invention of the carol in more recent centuries has focused upon, initially, institutionalised notions, followed by increasingly international, not to say harmonised forms, of Christianity. Such is the blood-line of the carol—freedoms, like strictures only encourage and embolden composers, arrangers, choirmasters, clerics and wordsmiths to bring in the brass, descants, double choirs, full organ and entire congregations to the mix. The carol is just too much simple fun to leave alone. We shall keep inventing words, tunes, swapping them over and around and tweaking their old mysteries and jigs for examples to suit our times.