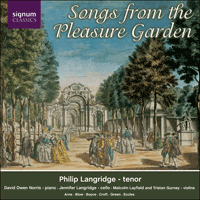 Songs from the Pleasure Garden

Philip Langridge is joined by a fine cast of musicians for this recording of songs from the Georgian era, centred around the rural paradises in and around London, the Pleasure Gardens.

Featuring works by some of the foremost composers of the day, this is a hugely entertaining and dramatic collection of songs where love, lust and lament are the main players.

I no sooner entered, than I was dazzled and confounded with the variety of beauties that rushed all at once upon my eye. Image to yourself—a spacious garden, part laid out in delightful walks, bounded with high hedges and trees, and paved with gravel; part exhibiting a wonderful assemblage of the most picturesque and striking objects, pavilions, lodges, groves, grottoes, lawns, temples, and cascades; porticoes, colonades, and rotundos; adorned with pillars, statues, and painting: the whole illuminated with an infinite number of lamps, disposed in different figures of suns, stars, and constellations; the place crowded with the gayest company, ranging through those blissful shades, or supping in different lodges on cold collations, enlivened with mirth, freedom, and good-humour, and animated by an excellent band of musick. Among the vocal performers I had the happiness to hear the celebrated Mrs. –, whose voice was so loud and so shrill, that it made my head ake through excess of pleasure.

Lydia Melford’s youthful gushings on the diversions to be found at the Vauxhall Pleasure Gardens may well be the tongue-in-cheek creation of writer Tobias Smollett (1721-1771), but nonetheless give a fairly succinct summary of how London’s Pleasure Gardens must have appeared to many a visitor in the Eighteenth Century.

With the restoration of the Monarchy in 1660, places for the public’s entertainment became the fashion and, with the spur of competition from the French Court, rapidly grew in number. The venues expanded from spaces newly accessible to the people, such as Hyde Park, antique springs thought to be medicinal, such as Sadler’s Wells or Bermondsey Spa as well as numerous taverns in and around London. At their height, in the Eighteenth Century, such venues, both indoor and outdoor, numbered over 500, with at least a tenth of those offering a mixed fare of well-organised musical entertainments. For a relatively modest fee, the Gardens provided the attraction of communing with nature and the bonus of refreshments, music and other less reputable, if equally enjoyable, occupations. The entry price was normally affordable and the promenades and pleasures available to all socio-economic groups. These were idealised rural paradises in and around London where dowager Duchesses, doctors, artists and musicians, painters, poets and peasants might rub shoulders. The diarists Pepys and Evelyn documented the nascent gardens (the latter, a noted landscape gardener, designed the walks at Euston Hall), Dr Johnson, James Boswell, Thackeray, and Fanny Burney all wrote of a typical evening’s events, Hogarth helped with the decor and design and Canaletto and Rowlanson painted the finished results.

At their most luxurious, gardens such as Vauxhall were laid out as a number of broad tree-lined avenues or ‘walks’ where the promenaders could happen upon verdant groves, arbors, illuminations, rotundas, pavilions and enclosures where music could be heard from painted supper booths by groups of diners partaking of the notoriously overpriced cold cuts and, of course, plenty of wine. Just as the mix of the revellers spanned across social norms, so the music followed suit and admitted anything from the ‘older’ style of instrumental pieces by Corelli to the ‘moderns’ like Haydn. Indeed, there were relatively few types of music that were not performed—folk-song and art song, symphony and concerto, sacred and profane were all given their due. Assuming the task of presenting such an extraordinary breadth of music, that some of the gardens secured the services of ‘resident’ composers is hardly surprising. Thomas Arne and James Hook both served in this capacity at Vauxhall and contributed healthily to the many published collections of songs which fed in to the popular psyche of succeeding generations.

The song element of these Georgian entertainments emphasises engaging melody, uncomplicated harmony, catchy, popular rhythms and an immediately digestible text. They range from the simplest of strophic songs and ballads—well within the reach of the enthusiastic amateur—through folk-like numbers and operatically infused coloratura pieces to full-blown cantatas that require a well-trained dramatic voice. While the music of continental Europe was often the preferred choice in the opera and concert venues, the pleasure gardens presented British composers with the opportunity to develop a sizeable repertory of engaging, native song.

The texts of the songs are every bit as diverting as the music. The poets range from the glories of Shakespeare, through Dryden to a fair few anonymous hacks of the day that knew where there was money was to be had. The Classical cultures of ancient Greece and Rome are naturally evident, given the prevailing bent for such scenarios in opera and the other arts of the period, but there’s a healthy contemporary dose of lusty songs of love: gained, lost, unrequited and unexpected. The topics concentrate less on Handelian depth of passion and heroic grandeur in the face of battle and more toward lascivious shepherds, naughty nymphs and shady groves. Among the antique luminaries, music’s standard-bearer, Orpheus has as much currency as love’s harbinger, Cupid. Maurice Green’s ‘Orpheus with His Lute’, set to lines from Shakespeare’s Henry VIII, is fulsome in its delicate praise of the ancient musician while the rather more bawdy ‘Orpheus and Euridice’ is an anonymous text set by William Boyce. This is an altogether more knowing piece: saucy, flippant, irreverent entertainment—not too far away from Victorian Music Hall:

All Hell was astonished a person so wise
Should rashly endanger his life
And venture so far, but how vast their surprise,
When they heard that he came for his wife.

Such double-edged quips are typical of the bawdier songs. Eccles’ ‘Belinda’ is a charmingly cheeky number, the lady in question is “all engaging, most obliging” and the vocal line has the male protagonist in a frenzy at her “pretty, pleasing form”. Images of Diana, Daphne, Phoebus and the hunt are a common pursuit in these songs. Despite its Handelian instrumental introduction, Thomas Arne’s ‘Jenny’ is “bright as the day and buxom as May”, but, none too happy at the kisses pressed on her, escapes her amorous pursuant’s arms in an amusing mock operatic coloratura passage, changing the nature of the simple song momentarily into a bravura aria. At a more mordant end of the spectrum lies William Jackson’s setting of the lines “Let no mortal sing to me / the stupid craze of constancy”. This is a song full of the lusts of the Pleasure Gardens, but cloaked in the impermanence of natural phenomena and a frank acknowledgement that, “Nature bids her subjects range, / All creation’s full of change”.

So much for the songs that might have sparked adventures in the ‘dark walks’ of the gardens—walks which were intermittently petitioned to be lit due to mis-adventuring couples. Love in a more pure form is never far away. The unrequited laments of “How Severe is My Fate” successfully touch a nerve while James Hook’s marvelous” The Steadfast Shepherd” is a song of solid constancy in the face of temptation:

Go, go, display thy beauty’s ray,
To some more soon enamoured swain,
Those common wiles of sighs and smiles
Are all bestowed in vain.

Thankfully, there are a good number of relatively straightforward pledges of love. Boyce’s ‘The Non-Parreill’ is initially back-handedly complimentary, but the protagonist’s love grows exponentially with every verse, until he invokes heaven to “bless me with her love”. ‘Celia the Fair’ set by George Munro is a little delight of straightforward praise of the female, likening the loved one to a goddess that might make the singer “rival Jove in bliss”. Another thread that binds many of these pieces together is a certain self-reference to the pleasure gardens themselves. Mentions of verdant groves and arbors are liberally sprinkled through the texts. William Boyce’s ‘Spring Gardens’ directly sings of Vauxhall’s own Spring Gardens:

See a grand pavilion yonder
Rising near embowering shades;
There a temple strikes with wonder
In full view of Colonnades.

Thomas Arne’s cantata, ‘Cymon and Iphigenia’ raises the level of discourse toward the realms of less frivolous art, though it does still manage the odd quip to keep the audience in tow. This little operatic scena received one of its earliest performances, by a Mr Lowe, at Vauxhall Gardens in 1750, the year of its composition. Its subject-matter derives from Boccaccio’s ‘Decameron’, as retold by Dryden, and relates the story of Cymon, a young and simple man from a noble family who falls in love with the beautiful Iphigenia while she sleeps. The power of their mutual love has the remarkable effect of transforming Cymon into an educated, accomplished gentleman. Love conquers all. Exactly the kind of ending any Pleasure Garden owner might have craved to send his guests happily away from the ‘dark’ walks and off into the night.

It is not often that I am able to sing with my own family on CD, but this one was special in that not only was my daughter Jennifer playing the cello, but Tristan Gurney was also playing my own violin (made in 1780 by Ferdinando Gagliano), David Owen Norris was playing one of his family too; a piano made by Christopher Ganer in 1781 and even Malcolm Layfield complemented the team by playing his own Gagliano violin (matching mine so beautifully). So overall the whole thing was rather incestuous!

The songs themselves could have been sung at the Pleasure Gardens of the time, and many of them were. The title of William Boyce’s Spring Gardens, for example already gives us the right flavour for the CD.

We have tried to give as much variety as possible in the choice of songs and also the choice of accompaniment. For example some of them are purely voice and harpsichord, while in Arne’s little Cantata Cymon and Iphegenia we decided to add two violins and cello in order to make it sound much more as it would have done in his day. David Owen Norris suggested that we also included songs with piano (including the famous Celia Fair, which I had sung as a young man in an arrangement) and the song Go Lov’ly Rose reminds me so much of the Quilter song years later, and it was so very interesting to have the chance to sing this version by Salomon.

I cannot begin to say how special it was to record these songs with Jennifer. There was virtually no need to rehearse with her because (as she told me later) she already knew how I would phrase them and breathe them. David and I have also sung together for many years now, which made the whole CD such fun to make.