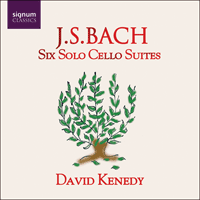 Bach's Solo Cello Suites are unsurpassed masterpieces. Depicting a complex universe of spirit, thought and human emotion. The inventiveness, breadth of wisdom and unsurpassed beauty of Bach's intention are represented in this intensely personal new recording by David Kenedy which captures the serenity and profundity of the music, as well as it's joyous expression as Dance. From both his frequent recitals and broadcasts in both Europe and the USA, David Kenedy has won international acclaim for his prolific work as a chamber musician. As well as being a founder member of the London Mozart Trio, he has twice had the honour of being invited to play in the Jaqueline du Pré Memorial Concerts in Lambeth Palace and the Wigmore Hall. Since 1990 he has been professor of 'cello and Chamber Music at Trinity College of Music, London.

'Inspired at a young age by hearing the legendary Pablo Casals play Bach's Six Cello Suites, the cellist David Kenedy, professor at Trinity College of Music in London, now brings the same music to disc. He shares Casals's snarling, passionate bow and very deliberate articulation, giving the music, in some cases, an almost staccato touch. Some listeners might prefer a more legato line, particularly in Suite No 5, where the chords have a tendency almost to bark. Kenedy differs from the master in certain important respects: he performs at slightly slower tempi, takes no liberties emphasising bowed notes with a left hand pizzicato, and smokes no pipe while playing—but otherwise the Spaniard's ghost is certainly here' (Classic FM)

'Having been inspired to take up the cello through listening to Casals's performances of the Bach Suites, it's perhaps inevitable that David Kenedy, a pupil of Aldo Parisot and Boris Pergamenshikow, should have approached the prospect of committing to disc his own interpretations of these works with some trepidation. The challenges are legion, not merely through trying to master the harmonic and contrapuntal implications of the music within one line, but also in attempting to preserve the spirit of the dance. But Kenedy's performances are obviously carefully thought through, have a clear emotional map of each suite and use a harmonic and contrapuntal logic that is effectively portrayed in the kind of warmly recorded performances you'd be happy to hear in the concert hall' (The Strad)

No-one will ever know precisely what creative or practical stimuli may have prompted Bach, in Cöthen around the year 1720, to set about the monumental task of composing Six Sonatas and Partitas for solo Violin, and Six Suites for solo ’cello. There can be no doubt, however, of the scale of the challenge he had set himself, uniting sacred and secular elements in music that is uncompromisingly contrapuntal and often chordal, incorporating many of the characteristics of organ preludes, orchestral Suites and choral works, as well as the sounds of formal dances and village bands, reduced to the minimal potential of a solo stringed instrument. In so doing it appears he was deliberately creating a seemingly insurmountable obstacle in order to draw out the best in himself, much as sculptors toil to draw flesh from intractable stone or metal, Classical dramatists imposed on themselves the three unities of time, place and action, or Beethoven, perhaps more than any other of the great eighteenth and nineteenth Century Classical composers, selected the most concise of 'themes', the briefest of musical ideas, to form the basis of an entire major work. It may also have been Bach’s intention to push forward the previously assumed technical limitations of the instrument. The ’cello Suites show him as an innovator, with the 'scordatura' tuning of the A string to G in the Fifth Suite, and the introduction of the newly invented five-string ’cello, with an added top E string in the Sixth, adding new dimensions to these compositions.

Despite the above innovations in the two final works, each of the Six Suites adheres rigidly to the same formal six-movement structure of the French Dance Suite, with the exception of the change from Minuets in Suites I and II, to Bourrées in Suites III and IV, to Gavottes in the final two Suites. The movements themselves, with few exceptions, tend to share many of the same characteristics from one Suite to another.

The Preludes unvaryingly consist of an apparently unstoppable series of notes of equal, or near-equal value, with pedal notes reminiscent of vast organ works, (especially the Prelude and Fugue of the Fifth Suite), open strings resonating like the ringing, cascading or tolling of bells, a seemingly endless series of inventions, written with the consummate skill of a master chess-player, often increasing in emotional intensity until crisis point is reached (Suites I, II and IV), finally rising from their earthly beginnings to a glorious, heavenly resolution. The Prelude of the First Suite ends with a chromatic scale rising like a ladder to heaven, while in the closing bars of the Second, when played in the original form (as in this recording), a celestial choir heralds the triumphant resolution of all that has gone before. This ascent within each prelude is mirrored by the overall rise of the Six Suites to the high register of the Final Suite, facilitated by the use of an extra top E string, amagnificent end to a long and often troubled journey.

The Allemandes tend to fall into two fairly distinct categories, some displaying an energetic, dancelike character, others more contemplative, twisting and turning like meandering rivers approachingtheir outlet in the sea. The first and particularly the sixth Allemandes, which fall into this latter type, have the feeling of a deeply mystical and timeless conversation between Man and his God.

The Courante is invariably fast. The Italian form, the Corrente, is represented here in the simple running rhythms of Suites I, II, III and VI. The French Courante, with its more complex and ambiguous rhythmic structure, is represented in Suite V. The Courante of the Fourth Suite falls somewhere between the two types.

The Sarabande is a slow and solemn dance in triple meter, stressing the first two beats of the bar. The variety of Bach’s treatment of this movementemanates principally from contrasting use of texture, from the utter simplicity of the Matisse-like line-drawing of the Sarabande in the Fifth Suite, to the almost unremitting fullness offered by the two, three and four note chords of the Sixth.

The Minuet, Bourrée and Gavotte are all stylised formal dances, written in pairs usually of similar structure and length, (with the notable exception of the Bourrées of the Fourth Suite), but contrasting character. The Minuet is in triple meter, poised and elegant. The Bourrée and Gavotte are both derived from folk dances: the Bourrée is in duple time with an up-beat opening, more lively and energetic than the Minuet; the Gavotte is a walking dance in dupletime, generally written on the half-bar.

The Gigue is characterised by strong rhythms, frequent use of a 'drone' open string bass, reminiscent of the primitive instruments of the village band, the foot-stamping 'romp' of a wedding-party, or maybe the celebration of a homecoming, an affirmation of human life in all its fullness and variety.

For all their shared characteristics, the Suites differ greatly from each other in musical and emotional content, largely dictated by the implications of the choice of key, though of course each Suite itself offers a considerable variety of moods. The First Suite is generally the simplest of the set, the innocent and optimistic beginning of a long journey. The Second Suite is the most intimate and fragile, while the Third is grand, confident and selfpossessed. The Fourth is on a much larger scale, wandering to distant, gloomy tonalities, a foretaste of the threat of doom embodied in the Fifth. In the Sixth, this threat is cast aside, and the Suites end in a glorious affirmation of all aspects of life, human and divine.

Viewed as a whole, the Suites can be seen as Bach’s musical offering to his Creator of a mirror of all that he sees around him, the labours of a servant emulating the endless diversity of his master. The Six Suites, like the Six days of Creation, combine to build a single structure incorporating the physical, mental and spiritual realms in a vast and extraordinary work, an epic voyage through the many facets of human life that transcends all cultures and ages.

I must have been about five. The door opened and my father entered, carrying three parcels, though it wasn’t Christmas. The contents were a portable record-player and two boxed vinyl sets, one of Schubert’s 'Winterreise', the other of Bach’s Six Suites for Solo ’cello, played by Pablo Casals.

These pieces, more than any other, have accompanied my relationship with music until this, my 50th year. No works can better reflect the tragic sadness that haunted my early years, (and continues to haunt me now), than those magically simple songs of love and death that make up the 'Winterreise' cycle, and that even then, at the first hearing, made me cry. The Bach ’cello Suites, on the other hand, for all their threat of damnation, their depths of spirituality and sorrow, are overwhelmingly optimistic works, a celebration of all aspects of life and love, Earthly and Divine, and the expression of our joy as Dance, the rhythm that links us to the pulse of all Creation. In these works, I felt the reflection of my own inner joy, hope and strength, and it is these Suites, and Casals’ performance of them in particular, that made me feel I had to play the ’cello, and to discover in its mellow sounds my own voice, already bursting with so much to tell, and no other way to speak.

My father could not have chosen better. He was twice to exit from my life, the second time when he died at the age of 53. The music of Bach, almost three hundred years old, lives on in me, and in all of us. The twin elements of Song and Dance will be with us as long as we are human.

As I reach the age of 50, and this music seems to want to come out of me, I have no hidden agenda, no wish to comply to or to deny any historical tradition, only a desire to share with you, as honestly as I can, what Bach’s all-encompassing music says to me, to tell my version of its pain and joy, truth and beauty.