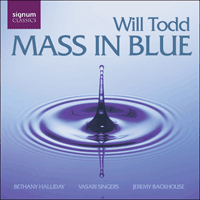 Mass in Blue & other choral works

Mass in Blue, performed by ‘one of the most accomplished small choral groups of our time’ (Gramophone), is a brilliant blend of driving jazz grooves and clear, strong, choral writing against which the solo piano and solo soprano voice weave and blend in a delightful aural tapestry.

Leading young composer Will Todd performs a unique fusion of sacred choral music and jazz in his Mass in Blue. This central work is complemented by beautiful musical settings of religious texts, infused with a highly individual and melodic style, bringing the composer’s lifelong love of traditional choral music into the 21st century with spiritual sensitivity and a contemporary edge.

'The balance of the programme, with Todd accompanying on some tracks, comprises modest but effective settings of various psalms, poems and hymns. Mostly commissioned for school and church choirs, they are object lessons in economy and clarity, which the Vasari Singers perform impeccably' (Gramophone)
'The result is vibrant and colourful and is performed with vitality and commitment' (Choir & Organ)» More

Mass in Blue ‘Jazz Mass’ Op 28
Written in 2003 in response to a commission from David Temple and Hertfordshire Chorus and originally premiered under the title Jazz Mass, Will Todd’s Mass in Blue is a brilliant blend of driving jazz grooves and clear, strong, choral writing against which the solo piano and solo soprano voice weave and blend in a delightful aural tapestry. The work reflects not only the composer’s love of jazz music and his admiration of jazz performers, but also his own experience as an improviser. It also allows Todd to make use of his extensive choral skills which he deploys so effectively in works such as the oratorios The Burning Road (Op 10) and Saint Cuthbert (Op 7) or the chorus writing of his opera The Blackened Man. It is a confident work by a composer who understands and responds to the jazz idiom, making free use of the 12-bar blues sequence (which has been fundamental in the development of jazz music) as well as more complex harmonic processes.

The Kyrie opens with an energetic cadenza for the trio section which builds into the first set tempo of the work. Over this the first vocal entry is heard, a bluesy theme reminiscent of negro spirituals and therefore apt for the text ‘Kyrie eleison’ (‘Lord have mercy’). Gradually other lines join the initial melody until the full choir is singing. On a move to the sub-dominant (B flat) the choir ecstatically bursts forth with ‘Christe eleison’ (‘Christ have mercy’) and as this music subsides we hear the soprano enter on a soulful melody with a strong improvised feel, which builds over the return of the original key of F minor. The music of the opening ‘Kyrie eleison’ is repeated with the soloist interwoven around the vocal lines in a virtuosic display. The movement slows and closes on a thrilling F minor 11 chord.

The Gloria is set up with a fanfare from the brass which punctuates the whole movement. From the moment the choir enters there is an uplifting rhythmic drive to this setting with the full brass section adding a distinctive colour. In the central section of the Gloria a pulsating 5/8 time is set up which gradually builds until a recapitulation of the opening material brings the movement to a close.

The Credo features the soprano in a colourful 12-bar blues in 12/8 time. There is a strong gospel feel with the choir repeating lines from the soloist and humming soft backing harmony. Again in three sections, the first blues part gives way to a more sombre section at the ‘Crucifixus’, and after ‘Et sepultus est’ (‘and he was buried’) a piano solo leads the band into a blazing depiction of the moment of resurrection. The ‘Et resurrexit’ is set with a scorching up-tempo swing which eventually cuts back into the 12/8 as the movement builds to a thrilling climax.

Like the Gloria, the Sanctus is set for the choir and band without the soloist. It is a beautiful, slow ballad set up initially on the piano in which the woodwind players are featured, especially soprano sax. The movement provides a welcome period of tranquility and reflection after the sheer energy of the previous three movements.

The Benedictus begins with solo double bass over which the choir sings a theme which builds up from the basses through the rest of the voices. This music is gradually invaded by a new, more driving beat and the solo voice begins to weave into the texture once again. This funky riff gradually takes over and the music emerges into a powerful ‘Hosanna’ section with punching brass and a jubilant choral sound.

The Agnus Dei grows out of the dying echoes of the ‘Hosanna’ with a haunting soprano ballad accompanied by piano. In the stirring maestoso which follows, we hear the main themes of the work on high trumpet fanfares and strong trombone chords. Once again the strong 12-bar blues harmony underpins the texture. A huge climactic entry from the choir subsides into a gentle A minor section in which intricate choral lines are woven over a simple, repeated chordal structure. After another big build this time with the chorus featured, the music returns to the opening ballad theme, the soprano now accompanied by soft choir and brass. This is a substantial movement and is more than beautiful: it is painful, plaintive, a cry for mercy and a prayer for peace. Traditionally the mass would end here, but in another dramatic master-stroke Will Todd leaves the altos hanging on a soft E after the last chord of the Agnus Dei. The air of expectation grows as the sopranos softly recapitulate the Credo theme. Gradually the music builds with the soloist entering and then the tenors and basses. Suddenly the driving 12/8 beat of the Credo is forcing the music forward as the choir sing ‘Et expecto resurrectionem’ (‘we look for the resurrection’) and the music comes back to the key in which the work began, F minor. The emphatic final chords of the work leave the listener not in quiet contemplation but jerked forward into praise and belief. Credo! Amen!

Christus est stella
Written to a commission from The Durham Singers in 2000, with financial assistance from Durham City Arts. This choir have been very supportive of my music over the years, travelling long distances to appear in my performances all over the country with other choirs. The words are a prayer of The Venerable Bede who is buried in Durham Cathedral, one of my favourite religious buildings. The text appears above the tomb in the Galillee Chapel with the Latin interwoven with English translation. I also set this text in English for my sister’s wedding in 1992.

The Christ Child
A work written (in 1997) for St Oswald’s Church Choir where I sang initially as a treble and where I continued to sing well into my 20s. It was this experience that cemented my life-long love of choral music and these beautiful G K Chesterton words seem to cry out for soft, heartfelt harmonies. The piano part provides the simple chordal harmonies over which the voices weave their lines.

Ave verum corpus
Commssioned by David Grubb for Sidcup Grammar School in 2001 for their tour of Italy. This work makes use of a plainsong style melody and minimalist piano accompaniment to create a sense of muted worship and awe. I first set this famous text as a ten year old, modelling my piece on the popular Elgar setting with which I was familiar from church choir. Another favourite is the Mozart Ave verum corpus, as well as other more modern offerings. It is a wonderful, inspiring text and deserves to be set again and again.

None other lamb
This setting of Christina Rossetti’s poem is another written for St Oswald’s Church Choir, and their Organist David Higgins, in 1998. David was my first composition teacher and very supportive of my teenage musical efforts. The heartfelt intimacy of the poet’s words seems to demand the simplest of treatments.

The Rose
This anthem is the central movement of A Pageant for Christémas, commissioned by Roger Muttitt for Durham School in 1998. The outer movements are both settings of existing hymns (‘Of the Father’s Love Begotten’ and ‘Hark the Herald Angels Sing’) and these beautiful W R Rodgers words provide the spiritual heart of the larger work.

Lead me Lord
This simple setting was written for the chapel choir of Durham School in 1997. The words are adapted from Psalm 5 and the setting makes use of soprano solo, which might by sung by semi-chorus if desired.

Lighting the way (A Song for Pilgrims)
Written for the ‘Lighting the Way Festival’ in Durham Cathedral in 2000, this song was sung by thousands of North East school children as part of their visits to the Cathedral over the course of several weeks. It was written with the intention of being easy to pick up, and this has made it a popular worship song, beyond the context of the original commission.

Every stone shall cry
I came across this poem in an anthology of Christmas writing and was immediately struck by its rhythmic energy and brightness. The setting is an AABA song form and the jazzy block chords and added 9ths harmony reflect the joy of the Christmas message. The syncopated choir rhythms also make the text bounce along.