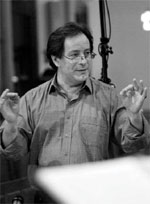 Jeremy Backhouse is one of Britain’s leading conductors of amateur choirs, and enjoys a growing reputation in the UK and overseas for inspiring vivid, passionate performances. He began his musical career in Canterbury Cathedral where he was Senior Chorister, and later studied music at Liverpool University. He spent five years as Music Editor at the Royal National Institute for the Blind, where he was responsible for the transcription of print music into Braille. In 1986 he joined EMI Records as a Literary Editor and from April 1990 combined his work as a Consultant Editor for EMI Classics and later Boosey & Hawkes Music Publishers with his career as a freelance conductor.

Since winning the prestigious Sainsbury’s Choir of the Year competition in 1988, Jeremy has led the Vasari Singers in regular performances at the South Bank and at St John’s, Smith Square in London, as well as in the cathedrals of Canterbury, Chichester, Winchester, Hereford, Ely, Peterborough and Westminster Abbey.

Jeremy is totally committed to contemporary music and to the commissioning of new works. He and Vasari have commissioned over 20 new works in their recent history, from small anthems, to works of the grandest scale: the most recent examples being an 80-minute oratorio by Francis Pott entitled The Cloud of Unknowing (2006), and a glorious Requiem from Gabriel Jackson (2008).

In January 1995, he was appointed Chorus Master of the Vivace Chorus (formerly the Guildford Philharmonic Choir). Jeremy has presented some ambitious programmes, including a thrilling performance of Mahler’s “Symphony of a Thousand” (No 8) and in November 2008 a stunning performance of Verdi’s Requiem. From September 1998 to December 2004, Jeremy was the Music Director of the Wooburn Singers, only the third conductor in the distinguished 30- year history of the choir, following Richard Hickox and Stephen Jackson.

In January 2009 Jeremy took up the post of Music Director of the Salisbury Community Choir, a 180-strong non-auditioned choir.