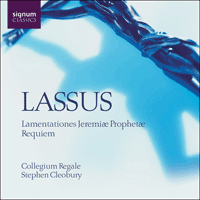 During the last twenty years of his life, Orlande de Lassus was the most celebrated composer in Europe. From the time that he took up the duties of maestro di cappella in the Court of the Duke of Bavaria at Munich, he began to be called 'prince of musicians' and 'the divine Olrande'. The pieces selected for this recording represent Lassus' treatment of the theme of dealth during the mature period. The first group considered the death of Christ: second, the death of a christian.

'There are very few recordings of these pieces, and so we must be grateful for these clear, musical performances sustained by some rock solid singing' (BBC Music Magazine)» More

'The mystery of the choir achieves its gorgeous blend with such transitory, albeit overlapping, personnel' (The Times)» More

During the last thirty years of his life, Orlande de Lassus (1532–1594) was the most celebrated composer in Europe. From the time that he took up the duties of maestro di cappella in the court of the Dukes of Bavaria at Munich, he began to be called ‘prince of musicians’ and ‘the divine Orlande’. In this he outstripped the other musical giants of the day, Palestrina, Victoria, and Byrd. The pieces selected for this recording represent Lassus’s treatment of the theme of death during this mature period. The first group considers the death of Christ; the second, the death of the Christian.

The Old Testament ‘Lamentations’ traditionally attributed to the prophet Jeremiah comprise five Hebrew poems about the destruction of Jerusalem in 586 BC at the hands of the Babylonians. The Lamentations were eventually incorporated into the Christian liturgies of Holy Week. Three passages from the Lamentations were read as part of the office of Matins (or Tenebrae) on each of the three days leading up to Easter, the Triduum sacrum of Maundy Thursday, Good Friday, and Holy Saturday. These passages were sung to a more elaborate recitation tone than that usually used for Biblical lections. This special musical treatment led to the many polyphonic settings of the Lamentations that appeared in the sixteenth century. Lassus himself wrote two. This recording includes the three readings from Lamentations assigned to Maundy Thursday in his five-voice version, published in 1585 (Tracks 1-3).

The Lamentations are acrostic poems arranged according to the twenty-two letters of the Hebrew alphabet. This structure was acknowledged in the Latin liturgy, with each verse preceded by its Hebrew letter (Aleph, Beth, Ghimel, etc.). Lassus’s brief and expressive treatments of each letter are the aural equivalent of the sumptuously illuminated initials in a medieval manuscript. To each reading, the liturgy adds the closing non-scriptural phrase, ‘Jerusalem, Jerusalem, turn back to the Lord your God’.

Lassus was most famous as a composer of madrigals—vernacular songs of love, sorrow, battle, and wine. The term ‘madrigalism’ refers to the vivid word-painting so characteristic of this genre, in which composers devised ingenious ways to make the music mimic the meaning of the words. Lassus’s skill in word-painting carried over, albeit subtly, into his sacred compositions, and his Lamentations will reward the attentive listener with many entertaining or moving musical clues. Some are quite obvious, such as the music of the first verse, ‘How solitary sits the city that was once full of people’. Lassus has the word sola (solitary) sung by an austere duet, with each voice often heard by itself. At plena (full), however, the rest of the choir returns in a dramatic simultaneous entry. Some of the wordplay, however, might only have been noticed by trained singers. The third verse (Ghimel) includes the phrase, ‘She dwelt among the heathen and found no rest’. Here, Lassus has the baritones and basses sing the word requiem (rest) to the plainsong melody of the Introit of the Mass of the Dead, Requiem aeternam. (This may be heard later on this recording at the beginning of Track 6.)

Christians read the Lamentations not just as elegies on the destruction of Jerusalem brought about through Israel’s disobedience, but as a foreshadowing of the sufferings of Christ. Like the Psalms, they may be read in the vox Christi, the voice of Christ. Certain verses are particularly appropriate to Jesus’s suffering and death. The second verse (Beth), which says of Jerusalem, ‘Weeping she has wept in the night, and her tears are on her cheeks. There is no one to comfort her among all that were dear to her,’ is the Old Testament’s ‘type’ of the Agony in the Garden of Gethsemane, when Jesus was ‘exceeding sorrowful, even unto death’ (Matt. 26. 38), and later deserted by his disciples. The great text O vos omnes, ‘O all you that pass by in the way, hearken, and see if there be any sorrow that is like unto my sorrow’ (Lamed, Track 3), has long been read as if spoken by Christ from the cross. Lassus’s simple treatment of this text is just as effective as many more elaborate settings by later composers.

This Christian interpretation of the Lamentations was made explicit in the Great Responsories of Maundy Thursday, which quote from the Gospel accounts of Jesus’s agony and betrayal. A responsory is a chan sung after a reading, giving the congregation the opportunity to react to what it has just heard. Lassus’s motet In monte Oliveti takes its text from the responsory after the first reading from the Lamentations on Maundy Thursday, based on Matthew 26. 39–42. In this motet, published in 1568, Lassus divides the six voice parts into high and low groups, with overlapping entries to emphasize Jesus’s desperate cries of ‘Father! Father!’, bringing them together in a grand cascade to mark the impassioned plea, ‘let this cup pass from me’.

Unlike the Lamentations, which were sung only once each year, the Mass for the Dead, sometimes called the Requiem Mass, was frequently recited in the Latin liturgy. The development of the doctrine of Purgatory during the Middle Ages led to the recitation of the Requiem Mass not just at funerals but as a daily act of intercession on behalf of all the faithful departed. The ‘Church Militant’ on earth had the power to alleviate the suffering of the ‘Church Expectant’ being purified in Purgatory before the Last Judgement. The living were therefore keen to make provision for their souls after death, and could endow a chantry priest to recite daily masses for their benefit. Even when the Requiem Mass was recited at a funeral, its prayers and chants still referred to the dead in the plural.

Lassus’s reputation as a composer of Masses rests mainly on his ‘parody Masses’, which derive their musical themes from well-known motets and madrigals, including his own compositions. The Mass heard on this recording—one of three Requiems by Lassus, this fourvoice setting having been published in 1578—is not a parody Mass. Lassus drew instead on the traditional plainsong melodies that for centuries had adorned the Requiem. The Introit (Track 6) comes closest to being a cantus firmus composition. The chant is carried in long notes by the second-highest voice, with the other voices in counterpoint around it. In the other chant-based movements—the Gradual, the Offertory, and the Communion—each grammatical phrase of the text is sung to the first few notes of the chant, enough to catch the ear of a trained court musician. The movements of the Mass Ordinary—the Kyrie, Sanctus, and Agnus Dei—are free compositions. Somewhat remarkably, Lassus included the notes for the solo intonation of each movement in the published scores; composers normally assumed the soloist would sing the chant from memory. In writing them out, Lassus required these intonations to be sung by a bass at an unusually low pitch. He did so again in his five-voice Requiem of 1589, which suggests that this was an important part of how Lassus thought the Mass for the Dead should be sung.

The flowing lines and vivid word-painting of Lassus’s madrigals and motets are absent here, replaced by static chords and simple imitative counterpoint. This Requiem has the character of a Missa brevis, and may have been performed frequently as an intercession in the ducal chapel, rather than for important funerals. This simplicity nevertheless has a theological dimension as a representation of the peace of heaven, a quality most evident in the Communion (Track 12). Lassus did not provide polyphonic settings of two chants: the Sequence, Dies irae, and the Tract, Absolve, Domine. The traditional plainsong melody of the Tract is heard on this recording outside its proper liturgical position, serving here to mark the division between the two main sections of the programme (Track 5).

Behind the humour and wit expressed in Lassus’s compositions, and especially in his surviving letters, lay a deep personal spirituality. The final motet on this recording comes from Lassus’s last work, a cycle of madrigals with texts selected from Luigi Tansillo’s devotional work, the Lagrime di S. Pietro (Tears of St Peter), a substantial collection of Italian poems about St Peter’s grief after his denial of Jesus (see Matt. 26. 75). The Latin text of Vide homo (Track 13) is not from Tansillo’s work, but was added by Lassus as a conclusion to the madrigals. In it, Christ accuses the reader, saying that of all the pain he has endured, the pain of man’s ingratitude is the heaviest to bear. Lassus wrote the dedication to the completed work on 24 May 1594, and died three weeks later. In this motet, Lassus displays his unrivalled mastery of counterpoint, manipulating the seven voices effortlessly to produce the expressive rhetorical effects so admired by his contemporaries. His choice of text for his self-proclaimed ‘swansong’, however, shows that for all his skill he still considered himself but an ‘unprofitable servant’ (Luke 17. 10), preparing for his own death by fixing his mind on the death of Christ.