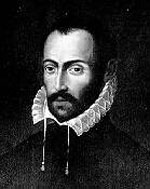 born: 1530/32
died: 14 June 1594
country: France
With an extant legacy of approximately sixty Mass settings, one hundred Magnificats, and an astonishing five hundred motets as well as several hundred secular works, Orlande de Lassus is by some distance the most prolific composer of the Renaissance. He was also the most celebrated, known in his time as princeps musicorum and ‘le divin Orlande’. The sheer bulk of his output has perhaps obscured Lassus’s significance in modern times, since even among specialists in sixteenth-century music, few can claim familiarity with all his works. Furthermore, the celebrity of his great contemporary Giovanni Pierluigi da Palestrina, maintained partly through the ubiquitous study of ‘Palestrinian counterpoint’ and partly through the preservation of the myth of the ‘Mass that saved polyphony’, has tended to overshadow Lassus’s fame, which was arguably greater in the sixteenth century than that of Palestrina. The recent publication of Lassus’s complete motets in modern clefs (Madison, WI: A-R Editions, 1995–2006, 21 volumes) will perhaps improve the visibility of this genre at least.

Born in Mons, Hainaut, in either 1530 or 1532, Lassus spent his early years as a chorister in the service of a member of the Gonzaga family in Mantua, Sicily and Milan. By 1549 he had moved to Naples, and began composing around this time. After another move, to Rome in 1551, he joined the household of the Archbishop of Florence, Antonio Altoviti, but in 1553 was appointed maestro di cappella at St John Lateran, the ‘city cathedral’ of Rome. Music prints under his name began to appear in 1555 during a protracted sojourn in Northern Europe.

The peregrinations of Lassus’s early career were to end permanently in 1556, when he accepted a position at the court of Duke Albrecht V of Bavaria, in Munich. Albrecht was succeeded by his son Wilhelm in 1579, but despite a considerable reduction in chapel resources during these transitional years, Lassus remained at the court, by now as chapelmaster, until his death on 14 June 1594. He was succeeded in turn by his two sons Ferdinand and Rudolph, who also published in 1604 a (nearly) complete edition of their father’s works, entitled Magnum opus musicum. 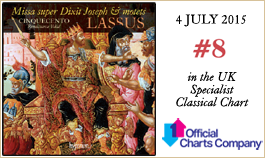