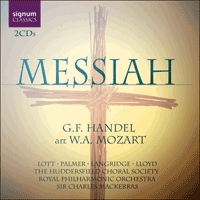 A stellar line-up of soloists, conductor, choir and orchestra combine forces in the re-mastered 2-albums set of Mozart's arrangement of Handel's much loved 'Messiah'.

In April 1742, shortly after the first performance of Messiah in Dublin for the city's Charitable Musical Society, the Dublin Journal reported that the oratorio "was allowed by the greatest of Judges to be the finest Compostion of Musick that was ever heard".

Sir Charles Mackerras continues the constantly evolving performance history of one of the world's most enduring masterpieces.

In April 1742, shortly after the first performance of Messiah in Dublin for the city's Charitable Musical Society, the Dublin Journal reported that the oratorio "was allowed by the greatest Judges to be the finest Composition of Musick that was ever heard". This remained the public's view tor some 200 years until modern performances and recordings of his vast output unveiled a whole host of works equally blessed with Handel's genius. For many, Messiah yet remains the quintessential Handelian statement without performances of which the period between Christmas and Easter would be lacking. Few, if any, works by his contemporaries have enjoyed such a lengthy performing tradition or have experienced such a wide range of versions and editions (many by Handel himself). Performances of Messiah range from its first flush of success in Handel's day to Mozart's revision, through the Victorian period where it was turned into a colossal edifice performed by thousands at the Crystal Palace, to the village hall sing-along 'People's' Messiah and ultimately the back-to-basics approach of the period performance specialists over the last fifty or so years. Us enormous popularity still persists with performances of every hue in capital cities and regional towns guaranteed year on year.

The libretto of Messiah was compiled in 1741 by Charles Jennens who progressed from being an avid Handel fan, subscribing to the composer's opera publications from 1725, to acquaintance and ultimately provider of libretti for a number of Handel's composition. The texts that Jennens shaped into a strong, coherent libretto for Messiah were drawn from the Book of Common Prayer and the Authorised Version of the Bible and fall into three section. Part I concentrates on prophecies of Christ's coming, the Annunciation and Nativity. Part II deals with Christ's suffering, resurrection and ascension and the apostles' evangelism while Part Ill celebrates Christ the Redeemer of man and the Christian soul's victory over death and sin. Unlike the libretti for Handel's other oratorios, which are in large part onstaged dramas drawing on his expertise as a composer of opera, Jennens includes hardly any narrative in Messiah, concentrating on devotional contemplation covering all phases of the life of Jesus Christ and thus encompassing the whole liturgical year.

Handel, a famously speedy worker, composed the music and completed his orchestration in only 24 days and that without borrowing much from existing compositions. He himself thought it a product of some inspiration—"I did think I did see all Heaven before me and the great God Himself". But, despite the success of the initial Dublin performances (the second repeated by public demand), it wasn't until 1750 that the work was performed as an annual event as part of London's Lenten oratorio season. Handel's ease with large design is amply demonstrated in the work: it's grand sweep lacking in affecting recitatives, sumptuous arias and numerous infectious choruses, all contributing to what Jennens brusquely dubbed "a fine entertainment".

The genesis of Mozart's version of Messiah lies in the good offices of Baron Gottfried Van Swieten, a Dutch-born Austrian diplomat, sometime composer, librettist and musical patron to, most notably, Haydn, C.P.E Bach, Mozart and the young Beethoven, who dedicated his first symphony to him. An active amateur musician, his interests spanned not only contemporary Austro-German music but extended back to older composers including the 'English' Handel whose scores he had purchased in England during his extensive diplomatic travel􀃬 Finally settled in Vienna as Prefect of the Imperial Library, Van Swieten founded the Society of Associated Cavaliers, a group consisting largely of noblemen interested in ancient music and which funded the performances of major choral compositions through subscription. Mozart became the musical director of the society's projects around 1788 and over the next three years conducted his own orchestrations of four works by Handel, Acis and Galatea, Alexanders feast, Ode for Saint Cecilia's Day and Messiah. Mozart's delighted discovery and early studies of Bach and Handel were the direct result of days spent in Van Swieten's rooms at the Imperial Library.

Unlike today's concert-going audience, the public of Mozart's lime was not accustomed lo the appropriation of a vast body of music from previous centuries - or in the case of Messiah, a mere half century. Therefore, furthering the cause of choral masterpieces from previous generations meant tailoring them to the prevalent tastes of the day. This included employing orchestral forces that met the 'norm' for 1780s Vienna - a full classical orchestra complete with woodwind and brass. Handel's original orchestration of strings with oboe doublings and the trumpet and timpani only entering al dramatic moments would have sounded rather restrained and colourless to the Viennese of the day. And while such a re-orchestration might have seemed bizarre to Handel, this was simply the contemporary method for presenting a work in its best light There was no acute sense in which an 'original' version of the score was somehow being brought to light through study and performance, as became the practice in the Twentieth Century.

One of the scores that Van Swieten brought back from his time in England was a first edition of the full score of Messiah published by Randall and Abel in 1767. For Mozart's 1789 version, a copyist was employed to prepare a score containing Handel's original vocal and string parts and tempo and dynamic indications, numerous blank staves being left for Mozart to furnish his own orchestration. Using a German translation of the English text by Christoph Daniel Ebeling, Der Messias. Van Swieten and Mozart also reallocated a handful of solos to voices different from those stipulated by Handel.

Mozart added parts for pairs of flutes, clarinets, bassoons and horns, three trombones and an expanded timpani role to Handel's scoring, These additions were not simply to bring the work up-to-date, as it were, but also served the purpose of replacing the continua organ which was not available in every venue where the new version was to be performed. A Mozartean soundscape is already evident in the opening bars of the Overture, the bolstering trombones and subsequent filigree recalling his opera Don Giovanni which had been premiered just a couple of years before, in 1787 The oratorio's newly variegated and colourful texture, by virtue of the woodwind and brass, is the most striking aspect of Mozart's reworking, allowing for exhilarating flourishes al colour in 'O, thou that tallest' and dramatic chromatic counterpoint in 'The people that walked in darkness'. The clarinet, an instrument that Handel would scarcely have recognised, is employed to beautiful effect throughout while the bassoon is handed a nimble commentary. While the new orchestration exquisitely elaborates Handel's harmonies and deftly ornaments his arias, Mozart is careful to preserve the older composer's flawless sense of drama. Ever true to the quote attributed to him, "Handel understands effect belier than any of us: when he chooses, he strikes like a thunderbolt!" Filtered through his own musical brilliance. Mozart never loses sight of Handel's magnificence, giving us a different perspective from the young genius on the work of an old master.

The present freshly remastered performance has a few amendments of its own to contribute to the work's traditions, Those arias reassigned for the 1789 version return Lo the voice parts originally intended by Handel. 'The trumpet shall sound' is restored to its original, thrilling version and the libretto shifts back to English from Ebeling's translation. Traditional cuts are adhered to in Parts II and III. Thus, Sir Charles Mackerras continues the constantly evolving performance history of one of the world's most enduring masterpieces.