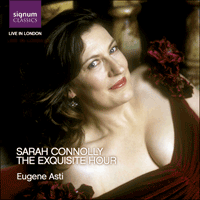 Following Sarah Connolly's series of title roles at English National Opera, Glyndebourne and New York's Metropolitan Opera in 2005, this live recital was recorded at St. John's, Smith Square, London, having been premiered at Carnegie Hall earlier in the year.

Accompanied by Eugene Asti, Sarah Connolly sings songs by Haydn, Brahms, Hahn, Korngold and Weill. Her distinctive, intelligent, warm, bright-sounding mezzo-soprano will be enjoyed by her growing 'army' of fans in this rich, romantic repertoire.

2006 sees Sarah Connolly appearing across the UK, and among her many overseas engagements lies a jewel in the crown—the title role in Dido at La Scala.

'Korngold and Weill receive a delicious sprinkling of stardust as both singer and pianist relax into cabaret mode, and every word is cherished and most poignantly projected. Connolly concludes her recital with two delightfully unpredictable encores by Ireland and Britten' (BBC Music Magazine)» More
'Songs by Britten and Ireland form the encores. Eugene Asti is her sensitive, technically assured accompanist' (The Guardian)» More

Arianna a Naxos Haydn
For all that Haydn’s quartets and symphonies are standard fare, his music for solo voice has generally been neglected. One of the few such works to establish a regular place in the repertoire is his cantata Arianna a Naxos, probably written in 1789; the author of the text remains anonymous. Haydn may have intended it for ‘Pepperl’, the daughter of his close friend Maria Anna Genzinger, like him a member of the Eslerhazy household (she was married lo Prince Esterhazy's doctor); certainly, the music itself—limited lo a range of a twelfth—points to its having been conceived for amateur performance (Haydn’s intention of scoring the keyboard part for orchestra was never realised).

Arianna a Naxos falls into four sections, two panels each of recitative and air. Haydn brings the piano into the action from the start, when it seems to be presenting Ariadne’s confused state as she awakens and finds herself alone—and the swelling textures after the first part of the recitative, leading to ‘Gia sorge in ciel la rosea Aurora’ certainly seem to portray the rise of ‘the rose-coloured Dawn’. ‘Dove sei’, the words which open the first aria, a broad, harmonically unstable Largo, draw from Haydn a phrase that so closely resembles ‘Dove sono’, sung by the Countess in Mozart’s Le Nozze di Figaro (written three years previously) that it might be a fleeting homage from one great composer to the other—whether deliberate or not is another question. The darting moods of the second recitative mirror Ariadne’s conflicting thoughts as, from the top of the cliff (climbed with the aid of the piano) she sees Theseus on board his ship and realises she has been abandoned. The second aria begins. Larghetto, as she resigns herself to death—but the cantata ends with a Presto explosion of anger, Strauss’ Ariadne is saved by Bacchus, but Haydn’s is abandoned to her tragic fate.

Seven Songs Brahms
Brahms was an inveterate composer of songs—to an extent that will never be fully realised, since he was also an inveterate destroyer of fledgling compositions he didn’t feel were up lo the mark. Among his very earliest works, for example, were some cycles of Eichendorff settings, but no one knows how much he slung out. The solo songs that did survive reach the staggering total of 203 original works. That’s not including the folksong settings (all German, but for one Neapolitan song) for voice and piano, which add another 85 to the total. The number climbs yet further when you add the eight solo-voice versions of the Zigeunerlieder, Op 103, the two Gesänge, Op 91, for voice, viola and piano, and Spruch (a canon for voice and viola), and the seven German folksongs for solo voice, chorus and piano—and that’s excluding the vocal duets and quartets.

‘Ständchen’, the first of the 5 Lieder Op 106, composed in 1886-8, sets an archetypically Romantic text by Franz Kugler, a Prussian bureaucrat and art-historian as well as a minor poet: its themes—the fountain, the moonlight, the students’ serenade, the sleeping maiden—were topoi that would feature again and again in Romantic poetry. ‘Da unten im Tale’, No 6 from Book I of the 49 Deutsche Volkslieder published in 1894, uses another, the peasant girl resigned to the loss of her lover. The source of Brahms’ text in this instance was the anthology Deutsche Volkslieder mil ihren Original-Weisen (‘German Folksongs with their Original Tunes’) of 1838-40, assembled by August Kretzschmer and Anton Wilhelm von Zuccalmaglio—none loo scrupulously, they filched material from earlier collections, straightened out some of the tunes to suit Romantic tastes and incorporated more recent songs, including some of their own, labelled ‘Alldeulsch’. Brahms first got to know the collection from a copy in Robert Schumann's library, and was unfazed when Kretzschmer’s and von Zuccalmaglio’s suspect methods were exposed—their texts had served his purpose, as ‘Da unten im Tale’ beautifully proves.

Brahms often published his solo songs in groups, and ‘Nachtwandler’, lo a text by his friend Max Kalbeck, and ‘Feldeinsamkeit’, setting a Herrmann Allmers poem, come from seventeen published in 1882 as Op 84-86, although some of them existed in manuscript at least four years earlier; these two are the third and second of the 6 Lieder, Op 86. In ‘Nachtwandler’ Brahms alternates major and minor chords to suggest the trance like slate of Kalbeck’s sleepwalker, ‘feldeinsamkeit’ oilers another primary Romantic topos—the identification of the poet with nature. the darker undercurrent supplied by the suggestion that this oneness might require the death of the poet ‘Aite Liebe’ comes from another burst of songs, 22 published as Op 69-72; it is the first of the 5 Lieder und Gesänge, Op 72, the vocal line soaring above chromatic broken chords in the piano. The two songs which open the four Gesänge, Op 43, similarly appeared in a what must have appeared lo Brahms’ public as a something of a song-burst, although many of them had been written earlier, their publication in 1868 was followed in the same year by Op 46, 47, 48 and 49—25 songs in all. Al the climax of ‘Die Mainacht’, an 1866 setting of the short-lived Ludwig Hoity, there’s a clear pre-echo of a work Brahms was to begin two years later—the Rhapsody for contralto, male chorus and orchestra.

This Brahms group ends with a song which is not simply one of the greatest he wrote—‘Von ewiger Liebe’ is one of the greatest art­songs anybody wrote, the imminent betrayal suggested by the words (by Hoffmann von Fallersleben, not Joseph Wenzig, as all the printed editions claim) redeemed by music of such passionate and dignified intensity that makes a performance such as the one of this CD a profoundly moving experience.

Five Songs Hahn
Reynaldo Hahn was one of those characters whose lives invite disbelief. Born in Caracas in 1874 of a German-Jewish father and a mother of Spanish slock, the youngest of twelve children, Hahn moved to Paris with his family at age four, by sixteen he was a respected enough composer to have written the incidental music for Daudet’s play L’obstacle. He was also a fine light baritone, teacher, critic, conductor, soldier in the First World War (he volunteered for service, although he was over-age) and refugee from the occupying Nazis in the Second— and Marcel Proust’s lover.

The exquisite ‘À Chloris’, written in 1916, makes delightful use of the walking bass of Bach’s ‘Air on a G string’ in the piano part, the voice soaring almost prayerfully above it. In each of the three stanzas of L’enamourée, a haunting 1892 setting of the popular Parnassian poet Théodore de Banville, the lyrical outburst of the text is the more effective for its emergence from an introspective introduction. In ‘Trois jours de vendange’, a Daudet selling from 1891, the folky charm of the opening is gradually transformed into deep sadness as the girl the poet has met sickens and dies—the loss underpinned by the ‘Dies irae’ in The piano in the final stanza. L’heure exquise is the fifth of the seven Chansons grises—Verlaine settings written in 1887-90 while Hahn was still a student at the Paris Conservatoire and first performed chez Daudet in the presence of Verlaine himself. L’heure exquise was one of the handful of songs that kept its place in the repertoire before the revival of interest in Hahn’s music from the 1970s onwards. Finally, ‘Quand je fus pris au pavilion’ of 1899, which matches the text, by the mediaeval prince-poet Charles, Duc d’Orléans, with teasingly old-fashioned music. As in ‘À Chloris’, Hahn seems to impose the vocal line on a piano part which is already self-sufficient.

Four Songs Korngold
Only twenty years ago modernist critics still looked down their noses at the music of Erich Wolfgang Korngold—‘more corn than gold’ was the tired cliché usually trolled out when his music was mentioned. Since then, with the rise in interest in the composers whose careers were blighted by the Nazis, Korngold’s star has been in the ascendant, and virtually all of his music has been recorded, some pieces many times over.

The four Abschiedslieder (‘Songs or farewell’), Op 14, Korngold’s finest song-cycle, were completed in 1920 and first performed by Maria Olszewska in Hamburg on 5 November 1921, with Korngold himself at the piano. The intense and long-breathed ‘Sterbelied’, No 1, asks its singer to negotiate some operatically precipitous portamenti and there are some awkward intervals (elevenths and twelfths). The apparent optimism of ‘Gelasster Abschied’, the closing song of the cycle (the text specially written for Korngold in 1919 by the poet Ernst Lothar), is undermined by the chromatic twists in the piano part—this farewell is not as painless as the text suggests. Are the references to Mahler’s fourth Symphony in the piano part also pointers lo lost happiness?

Korngold, one of the most feted composers in Hollywood, turned to the music he had written for studios. ‘Glückwunsch'’ uses the main theme from Devotion from 1943, and ‘All-Spanisch’ was re-written for The Sea Hawk in 1940, though the music itself reaches further back—its first form was as Das Mädchen, written in 1911, when Korngold was fourteen.

Two Songs Weill
Like Korngold in Hollywood, Kurt Weill look refuge from the Nazis in America—he lived on the East Coast, composing for the New York theatres. Weill’s Lost in the Stars, billed as ‘A Musical Tragedy’, was based on Alan Paton’s novel Cry the Beloved Country and was composed in the spring and summer of 1949, lo a book and lyrics by Maxwell Perkins. In spite of the serious nature of the subject—the racial tensions of apartheid South Africa—Lost in the Stars was a considerable success, after its opening on 30 October 1949, it ran for no fewer than 273 performances.

One Touch of Venus was written six years earlier, in the summer of 1943, opening in New York on 7 October that year, it ran for an astonishing 567 performances. Speak Low is one of the songs entrusted to the goddess Venus, brought to life from a statue when a ring is slipped over her fingers and pursues the barber who put it there.

Sarah Connolly sang two encores at her St John’s recital, John Ireland’s ‘Her Song’, the second of Three Songs to Poems by Thomas Hardy, published in 1925, and Benjamin Britten’s Walter de la Mare setting is the last of a set of live he composed between 1928 and 1931 (in his late teens), revising them in the summer of 1968 and publishing them as Tit for Tat.