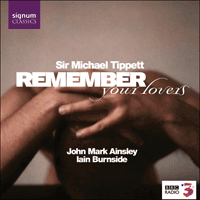 Remember your lovers & other songs

Sir Michael Tippett's great masterpieces—Boyhood's End and The Heart's Assurance—are coupled here with some of his editions of songs by Henry Purcell, and Benjamin Britten's companion piece to Boyhood's End—Canticle 1. Superbly performed by John Mark Ainsley and Iain Burnside, an added treat is the performance of Tippett and Bergman's edition of Pelham Humfrey's setting of John Donne's A Hymn to God the Father.

'Ainsley's voice is in prime form—it is effortless at the top of his range, and the seamless shift from full voice to falsetto is magical' (The Times)» More
'The strong Purcellian influence on Tippett and Britten is also pointed up in the imaginatively conceived disc, wonderfully performed' (The Evening Standard)» More

It is hard not to feel wistful when you look at the songs of Michael Tippett. The man chose quality over quantity. Damn it, why not both? Not for him Britten’s or Finzi’s stream of song writing trickling down through the decades, gradually unfolding autobiographical insight. Instead, Tippett gives us two bursts of greatness and then—some tantalising occasional pieces aside—calls it a day. Good news for opera companies, solo pianists and string quartets. Bad news for the world of song.

To whinge, though, would be churlish. Let us instead offer up thanks for two entirely different masterpieces. The Heart’s Assurance is that rarest of creations: a Second World War songcycle. While both the Boer War and the Flanders trenches left poignant legacies in words and music, different creative impulses were set in motion by the horrors of World War II. In song, Tippett’s cycle stands alone in stature. Boyhood’s End breaks other moulds, exploring the cusp between adolescence and adulthood. Tippett sculpts an unlikely slab of prose into something even more unlikely—a bold, invigorating Purcellian cantata.

The Heart’s Assurance remembers one lover in particular, and commemorates a very particular sort of love. In 1945 Tippett’s great friend Francesca Allinson committed suicide, her despair at the war compounded by deep personal unhappiness; Tippett’s sexuality made him unable to reciprocate her passion. Devastated by her death, he took five years to turn his emotions into music. For his texts Tippett turned to two young poets killed in the Second World War: Sidney Keyes was 20 and Alun Lewis only 19 when they died. As befits a composer who served time in Wormwood Scrubs for his pacifist convictions, he chose five poems where not a shot is fired. War, here, is the backdrop, not stage centre. Indeed, you will look in vain for details or locations specific to the Second World War. The landscape of the songs is universal, and would have been recognisable to any of the great war song composers: Mahler, Butterworth, Ives.

Tippett wrote the cycle “to commemorate all those who lost their lives and loves in the brutality of battle. I thought of the song-cycle as having a subtitle: ‘Love under the shadow of Death.’” Not for nothing is a poem called Compassion the centrepiece of the cycle. And an unashamedly sexual centrepiece it is too, the tenor mounting to a phallic top B to invoke the god-faced centaur.

All the songs show blazing personal commitment. Tippett wrestles his poems to the ground. He repeats lines fast, he repeats them slow; he splits words into great melismatic howls; he throws metre out the window. The simplest and most memorable vocal effect of all comes in Remember your lovers, where each verse begins with an unaccompanied refrain: recitative morphed into bugle call.

The voice he was writing for was Peter Pears. Who else would have been game enough to take it on? There is quiet homage on the last page of Song, where Tippett sits his tenor on a high E, famously Pears’s favourite note; it is a cross reference, too, to the monologue Now the Great Bear and Pleiades in Britten’s Peter Grimes. Tippett’s piano writing sat less comfortably with Britten’s fingers; after giving the premiere of The Heart’s Assurance he never played it again, resenting the level of practice it demanded. All five songs have markedly original textures. The intensity of the slow songs owes much to the contrast between long, sustained vocal lines and constant pianistic activity. Even when Tippett’s harmony moves slowly there is subterranean movement. So many scales for the left hand! Had Tippett been leafing through his Fitzwilliam Virginal Book? The passagework feels like John Bull or Orlando Gibbons.

The composer who leans over Tippett’s shoulder throughout this disc, though, is Henry Purcell. It was Francesca Allinson who first alerted Tippett to Purcell’s vitality and originality, but his moment of epiphany came after an air-raid in 1940, in the bombed out rubble of London’s Morley College. Tippett, soon to become the College’s Music Director, stumbled on some Purcell in the debris. He opened the books, was gripped by what he saw and started programming Purcell in his innovative College concerts. The consequences were far-reaching. In casting around for a tenor soloist he came across a young man called Peter Pears, while a shared enthusiasm for Purcell led Tippett in turn to Pears’s partner Benjamin Britten.

The Purcell realisations on this disc were made by Tippett in tandem with his choral director at Morley College, Walter Bergmann. Tippett and Bergmann shared with Britten the urge to bring these songs out of the library and into the concert hall. What strikes me most, half a century on, is how stylish these realisations are. While Britten’s dense pianistic approach now jars on ears that have undergone the Early Music revolution, Tippett and Bergmann stay light on their feet. Their touch is deft; composer ego is kept to a characteristic minimum; the spotlight stays firmly on Purcell himself.

Another product of bomb-struck Morley College was Tippett’s cantata Boyhood’s End, written for Pears and Britten in 1943. Tippett’s model here was Purcell’s Blessed Virgin’s Expostulation, a work he adored, with its mixture of recitative and arioso, its quicksilver changes of mood. Where, though, did Tippett get the idea to apply this model not to a poem, but to an extract from WH Hudson’s autobiography Far Away and Long Ago? Suddenly, instead of war-torn Lambeth, we are in the Argentine in the middle of the 19th century, surrounded by exotic plants and fabulous birds. We are poised on the brink of adulthood, awareness intensified by jangling hormones, asking the raw questions: What, then, did I want? What did I ask to have? The originality of Tippett’s choice of text is breathtaking. There has been nothing like it in English song before or since.

As with the later Heart’s Assurance, Tippett did not spare his soon-to-be-famous performers. The cantata provided a formidable workout for both. His tenor is called on to combine Baroque coloratura with a scat jazz vibe, and to deliver a Monteverdian trillo on the word ecstasy. He must be high and dramatic one moment, high and floaty the next—most cruelly on the sublime, larynx-splittingly difficult last page. The pianist meanwhile has his own split personalities: Lisztian octaves sit cheek by jowl with spikey harpsichordisms; a-gallop, a-gallop across the pampas turns in a matter of seconds into the serenity of floating blue skies.

Some four years later Britten wrote a companion piece to Boyhood’s End—a Purcellian cantata of his own, Canticle 1. Like Tippett, Britten gives us four connected sections, combines recitative and arioso and enjoys melismatic vocal effects. Unlike Tippett, he goes back to the 17th century for his text, to the Renaissance poet Francis Quarles. Drawing heavily on The Song of Solomon, Quarles intertwines the spiritual with the homoerotic. Listeners and performers alike can be forgiven if, by the time they reach Britten’s final section, the spiritual dimension has fallen by the wayside. This coda is surely the glory of the work: a dotted rhythm repeated hypnotically under teasingly angular vocal caresses; Purcellian Scotch snap tranquillised into a gay lullaby.

Two occasional works complete our selection. Music can be sung solo or chorally, in unison. Startlingly, this florid Shelley setting was written for the amateur forces of the East Sussex and West Kent Choral Festival in 1960. Either the choir was formidable or their rehearsals were gruelling: Music is far from simple. Songs for Ariel mark Tippett’s entry into the ranks of Shakespearean composers: they are part of his incidental music for the Old Vic Tempest in 1961. The outer songs are full of Baroque echoes, though radically pared down in texture from the exuberance of the earlier songs. Full Fathom Five is an exercise in starkness, its telling austerity underlining the miraculous modulation on sea-change. It is the last of Tippett’s claims to greatness as a songwriter. Here, to paraphrase Shostakovich, there may not be many notes; but there is a lot of music.