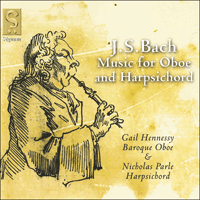 Bach: Music for oboe and harpsichord

Gail Hennessy and Nicholas Parle first played together in London in 1986. They discovered a strong musical rapport and their decision to record these Bach sonatas using oboe and harpsichord stems from their performances over the years of the "big" g minor sonata (BWV 1030b), a challenging work that, like much great music, reveals more and more with each playing.

'The American Baroque oboist Gail Hennessy has a warm full tone and an impressive dexterity on what in less skilled hands can be a treacherous instrument' (Early Music Forum of Scotland News, Scotland)» More

Considering his immense output as a composer, it is surprising to discover that Bach's contribution to the genre of the solo accompanied sonata is so slight: only 20 examples are known and, of these, the authorship of three is dubious. Despite this, their significance in his canon remains great: Bach took the unprecedented step of composing twelve with obbligato parts for the harpsichord, therefore elevating it from its usual subservient role, in which the player had to improvise a chordal accompaniment from a figured bass, placing equal importance on the melodic function of both instruments. No verified examples of a solo oboe sonata survive, which, in itself, is remarkable when considering its extensive use as an obbligato instrument in Bach's sacred vocal works. Thus all the solo parts of the ensemble works recorded here are transmutations of pieces originally intended for other instruments: the E flat major and C major sonatas (BWV1031 and BWV1033), and a later version of the G minor (BWV1030b) were written for the flute; only one of the two contemporary sources of the spurious G minor sonata (BWV1020) contains an instrumental designation, in this case the violin. Such 'arrangements' have historical precedents; unlike many modern works, in which instrumentation and texture are so intertwined that one would rarely consider deviating from the composer's intentions, Baroque and Classical musicians would play whatever they had to hand in whatever manner pleased them. Thus it is not uncommon to find, even in Bach's opera, workings of the same piece for entirely different forces; to cite two examples, the G major sonata for viola da gamba and harpsichord (BWV1027) is a re-working of a sonata for two flutes and basso continuo (BWV1039), and at least five of the six so-called Schübler Chorales (BWV645-50) are transcriptions of movements from Bach's sacred cantatas.

No autograph copy of the G minor sonata (BWV1030b) exists and, although its source clearly dates from the second half of the eighteenth century, we can assume that its provenance predates the more familiar autograph version in B minor, since several notes are misplaced by a third and remain at their original pitches. Despite the fact that only the harpsichord part of the earlier version survives, its reconstruction is quite revealing: we find a work that is perhaps more suited to the tessitura of the oboe, one in which the accompaniment makes fuller use of the harpsichord's richer and more sonorous registers, against which a solo flute might easily become lost.

Like the other obbligato sonatas, the G minor is in a format that was most favoured by the musicians of the Dresden court, in which the first fast movement usually adopted the ritornello structure that is most notably associated with the Italian concerto, and of which the first movement of the sonata is a particularly lengthy and elaborate example. Totalling some 119 bars, it bears a striking similarity to the opening chorus of Cantata 117, Sei Lob und Ehr dem höchsten Gut, not only through the similarity of its thematic material, but also in the correlation between the perpetuum mobile figuration of the harpsichord's right hand and the cantata's obbligato cello part. The final movement, a tour de force fugue that concludes with a gigue, is a juxtaposition of two opposing stylistic conventions. The opening reflects the sober counterpoint associated with seventeenth-century composers and its conclusion, a 12/16 binary fugue on the same subject, requires a performer of both technical and musical virtuosity. It is perhaps for this reason alone that the sonata was rescored a third higher, to suit better the register of the flute, since Bach's associations with the Saxon capital, which culminated in 1736 with his appointment as Kapellmeister von Haus to the Dresden court, have been documented since his Weimar days. There he undoubtedly met the virtuoso French flautist Pierre-Gabriel Buffardin (c1690-1768) whose greatest strength, according to Quantz, was the performance of fast and technically-demanding pieces, of which this is surely one of Bach's finest examples.

Bach's authorship can only be verified for one remaining ensemble work on this recording. The Sonata in C major (BWV529) is, in fact, an arrangement of the fifth of Bach's six organ trio sonatas, which, according to Forkel's 1802 biography, were composed during the 1720s to consolidate his eldest son Wilhelm Friedemann's organ technique. The sonatas illustrate Bach's tendency to reassign musical styles and languages from one instrument or ensemble to another; at Weimar, for example, he transcribed Italianate concerti for both organ and harpsichord, which in turn led to the development of the keyboard concerto. With this in mind, it is not unreasonable for performers to continue this tradition by, where feasible, transcribing music from one medium to another. As in the case of the B minor sonata, the three-movement format has more in common with the concerto than the sonata, with the ritornello structure of its quicker movements recalling the practices of Vivaldi. Importantly, the second movement contains several distinct elements: a fugal exposition, a ritornello and a da capo, achieved in a dialogue between the oboe and harpsichord's obbligato part, serve to make this an unusual, though attractive, movement. The final two-part Allegro also defies convention: its fugally-treated melody is a remarkable contrast to the concerto-like opening of the sonata; its florid semiquaver figuration is persistently diverse, rather than deriving specifically from the main theme, and provides a lively, yet continually-varied climax to the work.

The authorship of the remaining sonatas is less than certain, but, despite this, their sources present a series of intriguing puzzles that should make us question the rather dismissive findings of more recent commentators. For example, the principal source of the C major sonata, a copy in C P E Bach's somewhat youthful hand of c1731, ascribes the work to Sebastian. Immediately one should question what motivates any offspring of a highly regarded composer to place his father's name on a work he had written himself, unless he was perhaps responsible for it only in part. Much surviving evidence shows how C P E Bach made arrangements of his father's works, and the crudities which accompany the opening movements of this sonata, in the form of an awkward and lacklustre continuo bass, combined with a more appealing obbligato harpsichord part for the minuets, have led many to conclude that it is the work of two of Bach's pupils, one evidently more able than the other, or at least enjoying more attention from his master. But, rather than resting on this as evidence to question Sebastian's authorship, we should instead consider other factors that cast doubt on the 'pupil' theory. Firstly, we must consider the sonata's format: it is clearly unlike any other example in the Bach accompanied flute canon since it contains none of the features of the other sonatas, in particular the ritornello- and concerto-like structures. Secondly, we should consider its date: its format is complementary to the partita in A minor for unaccompanied flute (BWV1013), which should lead us to question if it is instead a work of the early 1720s. Thirdly, and perhaps more importantly, whereas the nature of the figuration of the opening movements defies the addition of anything other than the crudest continuo part, the minuets' flute and harpsichord obbligato parts are so similar that one could easily contend that the accompaniment is nothing more than a derivative of the solo flute part. If this is the case, then, rather than dealing with the youthful work of C P E Bach, or the combination of two more or less able student exercises, we might instead be dealing with an authentic unaccompanied work for a solo melody instrument. With this in mind, the performance here has been 'restored' to what might be reasonably argued as its 'original' state.

The main source for the sonata in E flat major, dating from around the mid-eighteenth century and written in an anonymous hand, bears a title page that is again clearly in Emanuel's script. It, too, indicates that Sebastian is its author, as does another source, in the hand of Bach's last pupil Christian Friedrich Penzel (1737-1801). Three sources of the G minor sonata (BWV1020) are known: one, dating from the mid-eighteenth century, and another from approximately one hundred years later, clearly state Sebastian's authorship. The third, prepared by Emanuel Bach's copyist Michel, states simply Signore C P E Bach. The argument against Bach's authorship of both rests on such un-Bachian features as pulsating basses and galant-sounding melodic lines. Alfred Dürr, in the introduction to his critical edition of the work (Bärenreiter, 1975) suggests that the E flat major is the work of Emanuel, written under Sebastian's supervision, with the G minor sonata (BWV1020) a later attempt to assert his own identity as a composer. Whilst we can accept his argument for the G minor, since it is modelled closely on its counterpart and a source close to Emanuel does bear his name, one is forced to question if Emanuel would have attributed the E flat to his father if it were his own work. We must also consider the fact that Sebastian's attribution is not the only one: Penzel's copy is sufficiently different from Emanuel's and can thus be regarded as independent verification of authorship. Although both do misattribute other works, this is not an adequate enough reason to dismiss either claim. In any case, its un-Bachian features might indeed be strong evidence of Bach's authorship: during the 1730s and 40s, when his connexions with the Dresden court were becoming stronger, Bach's music begins to show the influence of the galant style. Had the sonata been written during this period, there is no reason to suppose that Bach would have used any other type.

The remaining work, the Prelude and Fugue in C minor from the second part of The Well-Tempered Clavier (BWV871), is a demonstration of Bach's concise handling of form. The prelude, typical of the binary form preferred by Bach's contemporary, Domenico Scarlatti, interweaves two-part figuration through a predominantly sequential texture in an arch-like fashion to its relative major, before starting its descent to the tonic key. Typical of the north German tradition, the verset-like fugue incorporates all the features one would associate with a longer, more complex example: stretto, augmentation and chains of chromatically-altering modulatory suspensions are employed in its tightly-packed 27-bar framework.