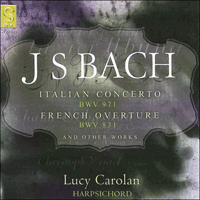 The Italian Concerto is unique: a wholly original solo keyboard work written as if "transcribed" from a string original to which Bach adds strikingly new ideas expressly suited for harpsichord.

The contrasting French Overture contains lighter dances from the court of Louis XIV, all of which are dance forms which had been familiar to Bach from his childhood.

'This powerful follow-up to the same performer's much praised recording of the Bach Partitas confirms her place among the leading exponents of the harpsichord in Britain today' (Early Music Forum of Scotland News, Scotland)» More
'Lucy Carolan's solid musicianship and first class technique serve these war-horses well' (Classics Today)» More

Having written a prodigious amount of church music in his first years as Cantor of the Thomasschule in Leipzig, Bach took up a further post in 1729: that of director of the Leipzig Collegium Musicum, an institution which put on public concerts in the city. Around this time, he turned his attention to secular works-no doubt with a view to performing: them at the Collegium's concerts-and began to bring out some of them in print In 1731 he published the six harpsichord partitas as the 'first part' of his Clavierübung, making it clear that he already had more 'keyboard practice' collections in mind. The second volume, consisting of the Italian Concerto and the French Overture, duly appeared in 1735. To find the hidden link between Clavierübung I and II, we must go back to the late 1720s, when Bach was issuing the partitas singly: at this stage, he announced plans for a set of seven suites, not six. Because of the overall key scheme of Clavierübung which radiates outwards from B flat, tracing the notes of an F major scale-a seventh partita would have had F major as its tonality; and indeed vol. II opens in that key, albeit with a concerto rather than a partita, providing vol. I's incomplete scale with its tonic note. Why Bach changed his original plans for vol. I is not known, but certainly a piece of some description in F major is needed to finish the pattern of keys begun there. The French Overture's B minor stands diametrically opposite the concerto's F major (a tritone away) and therefore introduces a note foreign to the F major scale. However, since the German language spells B flat as plain 'B' and B natural as 'H', the French Overture ensures that the two volumes together constitute a survey of all eight German note-names.

However much Bach may have viewed the two volumes as part of a grander overall scheme, he nevertheless took great pains to contrast them. If in vol. I Bach displays a masterly synthesis of Italian and French styles, while still managing to give each individual dance a unique character, in vol. II he takes these elements apart again, distilling their essence in just two pieces. While vol. I had included keyboard versions of orchestral genres (consider the first movements of Partitas nos. 4 and 5), vol. II concerns itself solely with these. And unique to the second volume is the concentration on the number two: two pieces, two keys, two modes, two nations, a two-manual harpsichord (this last actually specified on the title page). Coming after the immense sophistication of the partitas, such apparently crude dualism could have seemed a regressive step, but Bach's command of the two distinctive national styles is too fascinating for this to be the case. The Concerto 'after the Italian taste' shows him as thoroughly at home with several kinds of Italianate musical language. He acquired his knowledge of Italian repertoire early on: not only did he transcribe Vivaldi violin concertos for solo harpsichord around 1712-13-as is well known-but he also studied works by such composers as Albinoni, Torelli and Marcello. This apprenticeship showed him how to write large-scale movements with a cogent structure and led to his adoption of Italian 'ritornello' form (in which, as the name suggests, certain sections of a movement return to give it a satisfying overall shape) in his own concertos. Of these, the Italian Concerto is unique: a wholly original solo keyboard work written as if 'transcribed' from a string original. Some violinistic writing, which Bach had found when arranging Vivaldi, transferred extremely well to the harpsichord, and this idiom continued to inform his subsequent music for that instrument. Particularly striking are certain slow movements, the Andante of the Italian Concerto most of all. While the left hand's soft repeated-note figuration mimics a discreet string accompaniment a la Vivaldi, the right hand soars above it with a highly decorated melody, replete from the start with rubato-like syncopations, the whole suggesting the skilful improvisation of an Italian violin virtuoso circa 1700-10. The first movement, on the other hand, reflects the influence of more up-to-date Italian music. It too features prominent syncopations in its opening bars, but these have no flavour of 'written-out rubato'; rather, they allude to the latest galant Italian style: melodious, and softer-edged than Vivaldi. That each syncopation is followed by a feminine ending with 6/4-5/3 harmonies confirms the source of Bach's inspiration here. Notable German composers already influenced by such developments include the brothers Graun, J.J. Quantz and Telemann, all of whom had links with Bach. (If, however, the final version of this movement dates from 1731 or later, it may owe some of its finishing touches to Johann Adolf Hasse, who after several years in Italy had arrived in nearby Dresden as Saxon Court Kapellmeister, complete with Italian diva wife and conversion to Catholicism. Bach went to Dresden for the first performance of Hasse's opera Cleofide in September 1731, and the two composers became friendly. Although Bach made slighting references to the Dresden version of Italian galant style, he was certainly not immune to its influence.) In the Italian Concertds first movement, the keyboard figuration shares some of the violinistic touches of the (earlier?) Andante, but at times in the episodes Bach introduces sparkling new ideas strikingly suited to the harpsichord. This trend continues in the Presto, where both ritornellos and episodes explore keyboard virtuosity in a manner unique in Bach's oeuvre (the swift manual changes indicated here are integral to the overall effect). One of his former students, Johann Adolph Scheibe, would shortly attack him in print for supposed 'turgidity', but deigned to exempt the Italian Concerto from such criticism. The qualities Scheibe saw in it have no doubt contributed to its lasting popularity.

In all likelihood, the French Overture was not originally envisaged as a companion to the Italian Concerto. A C minor version dating from before 1733 exists, copied by Anna Magdalena Bach and entitled 'Partita'. Transposition down a semitone to B minor effected the desired 'opposition' to the Concerto, but also (annoyingly!) made it harder to play. Its new title, 'Ouverture', emphasised its newly important Frenchness and in fact describes it more accurately. Unlike the six published partitas, the Overture lacks a weighty allemande to balance the extensive first movement; it also contains more lighter dances (gavotte, passepied, bourrée) and thus has a 'tadpole' shape resembling that of the Frenchified orchestral suites (themselves called 'Ouvertures' by Bach). Like its companion Concerto, the French Overture may be seen as a keyboard 'transcription' of an orchestral genre, although an actual orchestral original is very unlikely to exist. This overture-suite type was seen by German composers as particularly French, in part because they believed the movement it lacked, the allemande, to originate in Germany and to have reached perfection in the hands of German composers.* In the French Overture, as in the orchestral suites, Bach eschews the web of ornamental figuration overlying: many of the dance in the six partitas in favour of much plainer textures that reveal the basic rhythms of the French dances from Louis XIV's court. Still fashionable in Germany in the 1730s, these dances were familiar to Bach from childhood, as can be seen from manuscripts copied by his elder brother at that time, and few of his German con-temporaries approach him in his assimilation of the refined and elusive French ban gout. Highlights of the French Overture include the majestic 'Ouverture' first movement, the noble Courante (Louis XN's favourite dance) and the Gigue with its sprightly dotted rhythms. The real tour de force, however, comes at the end with the Echo: a movement in which Bach combines a French binary-form dance with Italian ritornellos and the 17th-century Dutch/German organ technique of echoing one manual by another (here at a quick semiquaver's distance and therefore requiring much practice).

The third volume of Bach's Clavierübung appeared in print in September 1739. The largest of Bach's published collections, and consisting mainly of liturgical organ music, it must have had a long gestation period. One writer has proposed that the four manualiter Duets were the last items to be added, as late as July 1739: a possible function was to make up the total number of pieces in this third volume to 27 (3 x 3 x 3). Given that the liturgica settings number 21, perhaps the Duets link up with the remaining two items, the Prelude and Fugue in E flat BWV 552, which respectively begin and end the volume. But the Duets' key scheme (rising by step: E minor, F major, G major, A minor) seems planned independently of BWV 552's trinitarian three-flat key signature. In fact, it replicates something quite secular, the ancient Greek diatonic tetrachord e-a: we do not know if Bach intended this allusion, but he had the information readily available in Walther's Lexicon (1732), a book for which he acted as a sales agent in Leipzig. None of this explains the Duets' relation to Clavierübung III as a whole, and their presence in the collection remains puzzling. Owing to their apparent lack of liturgical content, they are occasionally performed as harpsichord pieces. All four have a contrapuntal texture, but Nos 2 and 4 imitate at the fifth-acting as unorthodox 'fugues' (because not in the same key) to the 'preludes' Nos 1 and 3, which are more like long two-part inventions. Of the four, No 2 is easily the most arresting, an unusual da capo fugue whose middle section, crabbed and chromatic, contrasts violently with the lively diatonic arpeggios generated by the main subject.

The Chromatic Fantasia and Fugue was not published during Bach's lifetime, but numerous manuscript copies circulated among his students and admirers, attesting to its special place in their estimation. The Fantasia in particular quickly attained cult status, presumably because it recalled those treasured occasions on which the Bach circle was privileged to hear the composer improvise at the harpsichord (or indeed the clavichord, the instrument at which the historian Charles Burney memorably described C.P.E. Bach post-prandially ex tempore, complete with drooping lower lip and fevered brow). Its component parts-swirling arpeggios, chromatic harmonies, quasi-recitative sections-became the very lingua Franca of the keyboard fantasia and other related genres for subsequent generations of composers, well into the 19th century: Mozart, Beethoven and Chopin all benefited from this seminal masterpiece (possibly via the fantasias of C.P.E. Bach, who knew his father's improvisatory rhetoric intimately). The Fugue may not have originally belonged with the Fantasia, but a certain looseness of construction suggests that it too has its roots in improvisation. It works up to a memorable climax with a repeated clashing dominant minor ninth chord, followed by the final entry of the fugue subject- for the first time at the very top of the keyboard. The pounding dactyls of the countersubject, which have contributed much to the piece's energetic drive, now sweep down in octaves in the left hand (most unusual for Bach) to assist the triumphant ending.