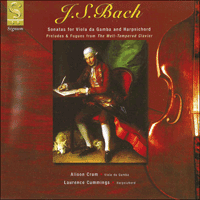 'Alison Crum and Laurence Cummings have created one of the most simply charming recordings of these works for viola da gamba and harpsichord that I know: their playing is sweet, relaxed and precise rhythmically. The viola da gamba sound is carefully nuanced, and Laurence Cummings's beautifully recorded harpsichord is exuberant' (Fanfare, USA)» More
'two great players who know the music's personality and mannerisms' (Classics Today)» More

It is not difficult to discern many of the elements that render Bach's sonatas for viola da gamba and harpsichord so remarkable by the standards of their age: a mixing of virtually every conceivable genre, form, style, medium and gesture of the late German Baroque; a forging of connections that had not hitherto been made; a penetrating insight into the multi-dimensional potentialities of each motive, theme and polyphonic complex.

On the other hand, despite his later importance Bach could be viewed as a musical cul-de-sac within the history of the eighteenth century itself: he did little to extend the musical vocabulary of his age, and his music hardly served as a basis for that of the succeeding generation. Yet what has made him a summit for many is his apparent ability to transcend historical contingency, somehow to stop the clock of outward progress and to rearrange and recreate the world as he knew it. Bach may be important not just as a supreme historical figure in western culture, who did what he could with what he had, but also in the way he epitomises a particular mode of thinking, a complex of beliefs about how the world coheres that almost amounts to a musical form of holism.

Bach's reasons for writing the three sonatas for viola da gamba and harpsichord are still quite obscure, as is the date of their genesis. Although there is curiously no original source that shows all three sonatas belonging together as a cycle-their present grouping is purely the conjecture of a mid­nineteenth century editor—their characteristic textures and their combined comprehensive critique of the sonata genre of Bach's age suggest that they somehow belong with one another. Only the first sonata exists in a previous version, a trio sonata for two flutes and continuo, and this cannot be dated to a period much before the present version, the autograph manuscript of which originates from around the early 1740s. Stylistically, too, the three sonatas seem to accord more with the musical processes typical of the mid­Leipzig years than with the period traditionally assigned to Bach's chamber music, his years as the Köthen Kapellmeister, 1717-23. The work of contemporary scholars, particularly Laurence Dreyfus, has done much to revolutionise our conception of Bach's career, and the dating of these sonatas has been a prime target for revision.

Furthermore, this hypothesis is strengthened—if with a little circularity—by the conjecture made both by Dreyfus and another recent editor of the sonatas, Lucy Robinson, that Bach designed the sonatas for the viola da gamba virtuoso Carl Friedrich Abel (son of Bach's friend and colleague at Köthen, Christian Ferdinand Abel), who lived in Leipzig sometime between 1737 and 1743 and who probably studied with Bach himself. Certainly the calligraphic score of the first sonata, beautifully laid out in separate parts with convenient page­turns, suggests a manuscript designed both for presentation and for actual performance. Given the detail of ornamentation and articulation which Bach specifies here (more complete than even his own conscientious wont) it is not difficult to imagine the composer preparing this manuscript for one of Abel's appearances in the Leipzig Collegium Musicum. What we know about the lost autograph of the third sonata suggests that this manuscript was similar in appearance and layout to that of the first sonata.

Despite Bach's care in preparing his scores, he did not necessarily work with the same degree of consistency and precision that we may expect from a modern Urtext editor. Indeed the notion of each piece of music as a finite and perfected musical text was by no means the norm in Bach's age. The problems of establishing a plausible text today are compounded when the works are preserved only in the hands of later and none-too-careful copyists; this is the case with the second and third sonatas. Quite often, the sources might offer contradictory or implausible readings, so the modern performer has to make decisions regarding certain details, just as the players of Bach's own age presumably did. Even the titles of these pieces give one pause for thought: 'Sonatas for viola da gamba and obbligato harpsichord.' First, the gamba is an instrument that was already somewhat archaic in Bach's age; if a composer used it in Germany, it would have been as a servile continuo instrument, or, if used as an obbligato, in pieces associated with royalty (given that it was so popular in the sumptuous French court) or with a lamenting affect. If a solo piece were to have been written, it would most likely have been a suite in the seventeenth-century French tradition, not in the more up-to-date sonata genre. Furthermore, the harpsichord was not traditionally associated with an obbligato role in the sonata (i.e. where the right hand plays as an equal partner with the other instrument). Bach seems to have made a habit of this, since he left multiple sonatas for violin and flute which have a similar obbligato role for harpsichord. The last movement of the D major sonata is perhaps the most interesting in its variety of textures. Here the harpsichord has a long extended episode with figuration specific to the keyboard idiom; the gamba merely accompanies. This predominance of the harpsichord towards the end of the movement somewhat parallels the cadenzas that Bach sometimes added to his harpsichord concertos, most strikingly in the first movement of the fifth Brandenburg Concerto.

The first two sonatas are written in the four­movement form, so fashionable in the celebrated sonatas of Corelli (slow-fast, slow-fast), but Bach is not content to furnish each of the four movements with a specific and consistent style. The opening movements of the first and second sonatas pay lip-service to the expansive melodic gestures of the traditional trio sonata, yet the pastoral atmosphere of the first sonata is integrated with an often intense contrapuntal dialogue (at times between all three voices), and chromatic gestures. The second sonata opens with a short-breathed, almost galant melody, accompanied by a bass which is obviously of the 'modern' Alberti kind; yet it soon emerges that the gamba and harpsichord work together in close imitation—for a time in strict canon—musical devices which many would have considered far too 'serious' for the subject matter in hand.

While the second movement of the first sonata is in the conventional fugal style, Bach gives it a galant motivic flavour; in other words, an ancient form is combined with relatively modern material. This is even more noticeable in the second movement of the second sonata, which is unexpectedly cast in binary form (i.e. that which is most appropriate for the dance genre) and where the fugal elements are consistently obscured by a modish, carefree texture. The most striking work is the third sonata, which comprises three movements rather than four. Not only is this more typical of the Vivaldian concerto than the trio-sonata, but the style of the music, particularly in the first movement, resembles that of the concerto idiom. Indeed these considerations have led several scholars to conjecture that this is the transcription of an original concerto movement. Yet, as a piece in the more 'private' sonata genre, it is doubly effective, pointing to worlds and concepts outside its own confines. The bold gestures, especially where gamba and harpsichord come together in unison, belie the traditionally introverted natures of both instruments and evoke a tutti string section. The central movement contains an astonishing variety of note values and motives, all within the slow triple metre, while the finale provides the most virtuosic display, interspersed with a more lyrical episode. The two modes—virtuosity and lyricism—are not pitted against one another, as they might have been by a later eighteenth-century composer, rather they are both integrated into the unstoppable world of the piece. Although legend has it that Bach composed his 'Well-Tempered Clavier' Book I during a time of discontent and boredom, without access to an instrument, it seems certain that the pieces were drawn together from a variety of earlier sources and that the process of compilation and composition was relatively protracted (reaching roughly the present form in 1722, just before he moved to Leipzig). Certainly the notion of writing a collection of pieces in every possible key (to most composers, many of these were only theoretical possibilities) must have required some thought. Bach also definitively established the practice of pairing a prelude with an independent fugue, something that had heretofore only been a particular variant of the usual pattern of writing a piece with alternating free and fugal sections.

Bach clearly shared the encyclopaedic tendencies of his age in his desire not only to cover every possible tonality but also to give an exhaustive collection of the styles, techniques and moods that are possible within his chosen medium. The preludes are often based on relatively simple ideas: arpeggiation in the G major which is spun into a brilliant two-part invention; chordal alternation in the G minor which creates the most tempestuous mood in the group; and a continuous pattern of similar motives in the D major which produces a piece of easy nonchalance. Bach always manages to develop the material in subtle ways giving the whole a sense of direction that seems to bring us inevitably to the conclusion. Schumann was, to some extent, right in describing these works as 'character pieces'. Even the fugues, sometimes mistaken for dry 'academic' forms, are based on very characterful subjects: a grand regal theme in D major, a slightly severe one in G minor with its emotive intervals and rhetorical rest and a carefree, dancelike one in G major. The latter fugue becomes increasingly dramatic with a touch of the minor mode towards the end. One particularly interesting feature is the way Bach uses (or doesn't use) difficult contrapuntal devices: the D major fugue presents an impressive, almost authoritarian effect, but it is relatively simple in terms of fugal construction, without even a regular countersubject; on the other hand, the G major fugue, for all its relatively facile air, conceals a quite complex compositional technique including a complete inversion (i.e. mirror image) of the subject.

This recording has been made using copies of instruments which Bach might well have known. The viol is a 1996 copy by Jane Julier of an instrument by Jakob Stainer; built in the south German style with a highly arched carved front, it produces a very focussed sound. The harpsichord, a 1992 copy by Bruce Kennedy of a Michael Mielke (such as the one owned by Bach himself), is strung entirely in brass, and has a clear sound with a strong fundamental. The two instruments make ideal partners for playing this intricate contrapuntal music, allowing all three lines to be heard equally.